In the wake of a change in state law, AirMedCare Network is once again offering memberships to help Wyoming residents pay for emergency air ambulance services. 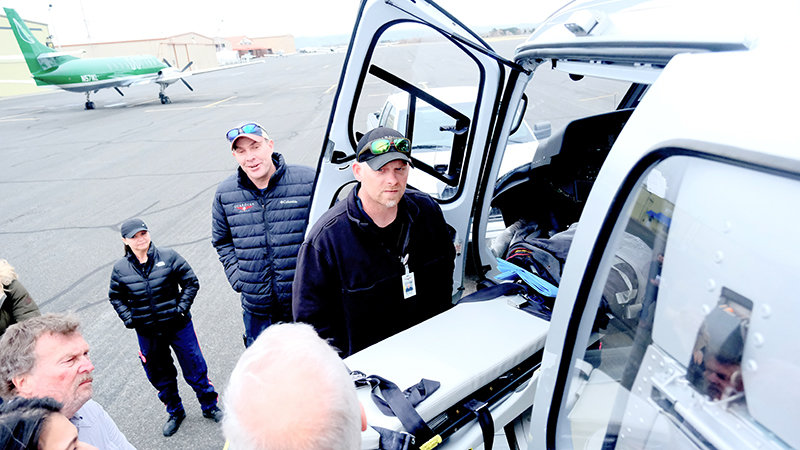 Guardian Flight Base Manager Joshua Campbell, front, and Lead Pilot Kevin Winters show off some features of the company’s H125 helicopter, which is based at Yellowstone Regional Airport in Cody, to legislators during a membership signing ceremony last week.
Tribune photo by Kevin Killough
Posted Thursday, April 28, 2022 8:15 am
By Kevin Killough

In the wake of a change in state law, AirMedCare Network is once again offering memberships to help Wyoming residents pay for emergency air ambulance services.

Park County legislators and AirMedCare officials gathered at Yellowstone Regional Airport on Friday to celebrate the change with a membership signing ceremony.

“The citizens of the area and the state are going to benefit greatly from the ability to get memberships again. The nightmare has been going on since 2019,” said state Rep. Dan Laursen, R-Powell, who became AirMedCare’s first new member when sales resumed.

Laursen was one of about 10,000 Wyoming residents to purchase memberships between April 1 and April 22, said Marc Kilman-Burnam, director of government relations for AMCN.

“It goes to show you that people in Wyoming wanted it,” Kilman-Burnam said.

Emergency air ambulance transports can easily cost tens of thousands of dollars. AirMedCare, a network of emergency air transport providers, offers memberships to reduce the costs of these emergencies.

In 2019, Wyoming passed a law requiring membership-based air-ambulance companies to register with the state as insurance companies. In 2021, the Legislature repealed this requirement and AMCN began selling memberships in Wyoming again.

Proponents of the 2019 law argued the legislation would expand air ambulance service to more people by allowing Medicaid payments. A provision in the law allowed companies to offer membership plans as long as they met Wyoming Department of Insurance standards.

However, membership-based companies such as AMCN argued it was killing their business model, and almost all of them stopped offering the service in Wyoming.

Kilman-Burnham said the 2019 law was passed so quickly that there wasn’t a lot of time for impacted companies to respond to proponents and stop the bill from passing.

Laursen said he received many phone calls from constituents complaining they could no longer get membership coverage.

“I don’t think individuals knew what they had until it was gone,” said Matt Strause, regional director for Guardian Flight, a member of the AMCN.

Laursen, who voted against the 2019 bill, said legislators who supported the bill were under the impression that it would be easy for companies like AMCN to register as insurance companies.

“We had to fight the state insurance companies. They wanted their hands on that money,” Laursen said.

A recurring point among the legislators who were at the press conference is that the rural character of Wyoming requires a lot of driving between populated areas, which translates into accidents in remote areas.

The state’s many outdoor opportunities also result in emergencies in places that can’t be reached except by helicopter.

“We can get up into the Bighorns to pick someone up,” said Kevin Winters, lead pilot with Guardian Flight.

Kilman-Burnham said AMCN has two helicopters in Cody and Riverton, as well as three airplanes, including one in Worland.  This ensures it can provide air ambulance services across the state.

“I understand the stress one feels when you need to get a loved one out of Cody quickly for a higher level of care,” she said.

Nina Webber, chairperson of the Republican Party National Committee of Wyoming, said the AMCN receives no public monies for its operations, including no COVID-19 relief funds. It’s solely supported by memberships.

“This is a good day for Park County,” French said.