Brian Erickson didn’t go to the ends of the earth to find Northwest College women’s soccer players for the 2021 season, but he went pretty darn close. 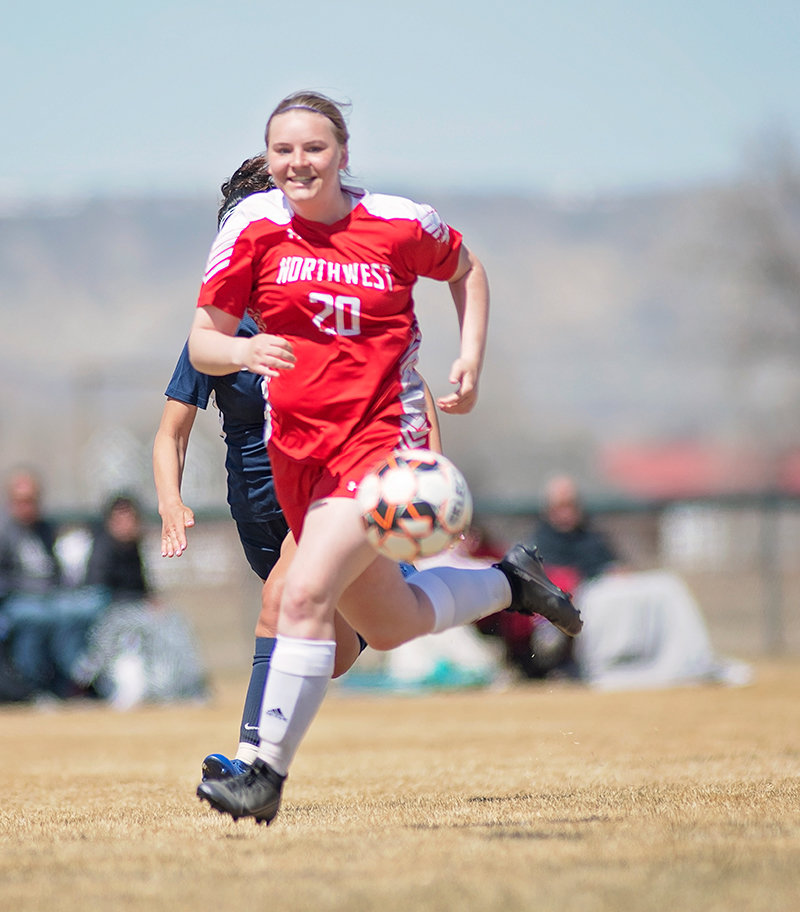 Michele Wagner tracks down a ball in NWC’s match against Otero earlier this season. Wagner, of Powell, is one of five soccer players who joined the squad just days before the 2021 season.
Tribune photo by Carla Wensky 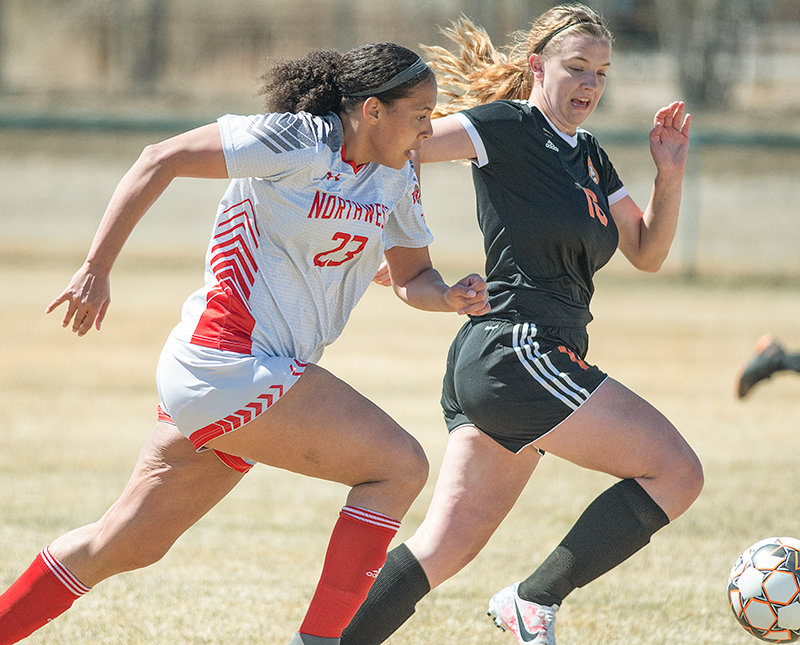 NWC sophomore Kierra Cutright runs toward a ball against CWC earlier in the season. Despite just a two-day offseason between women’s basketball and soccer, Cutright currently leads NWC in scoring.
Tribune photo by Carson Field 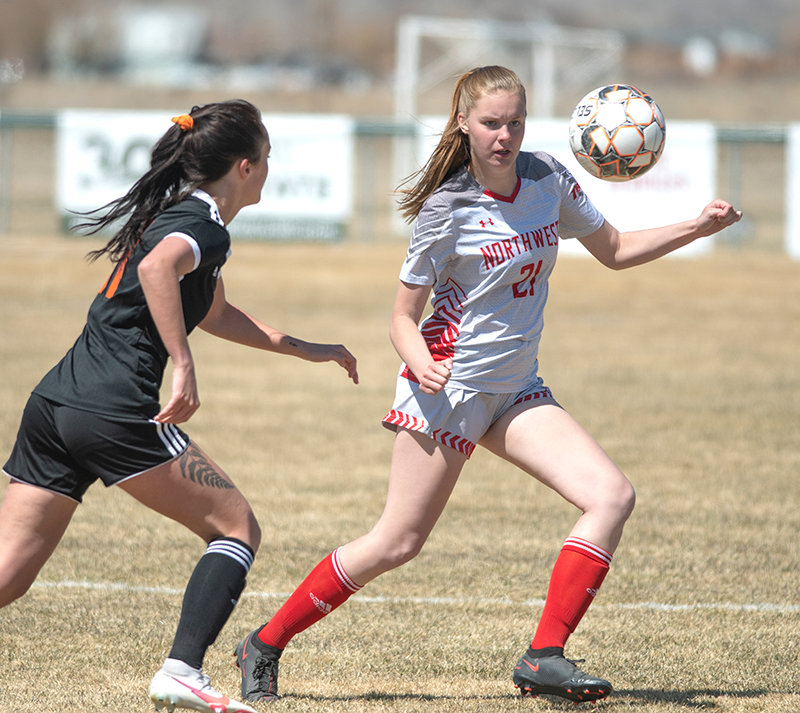 Brooke Leidholt goes for a ball in a match against Central Wyoming. Leidholt joined the soccer squad after the livestock judging team completed its 2021 season.
Tribune photo by Carson Field
Previous Next
Posted Thursday, May 6, 2021 8:10 am
By Carson Field

Brian Erickson didn’t go to the ends of the earth to find Northwest College women’s soccer players for the 2021 season, but he went pretty darn close.

With just 11 players on the roster and an open head coach position in February — less than two months until its opening match — NWC was in danger of not fielding a team. Needing at least a handful more to solidify it, the athletic director looked everywhere.

The first thing Erickson did was survey the local area, reaching out to various former members of Powell High School’s girls’ soccer teams.

Several had already left the area or didn’t want to return to the sport. He did, however, get ahold of one former Panther: 2020 PHS graduate Michele Wagner. Wagner played two years of varsity soccer and was supposed to play a third before COVID-19 axed the 2020 high school season.

With almost two years away from the pitch, Wagner received the unexpected offer while eating dinner with her aunt.

“I was super shocked when they called me,” Wagner said.

It took some convincing, but Erickson’s pitch — a scholarship and an offer to play her favorite sport — was appealing enough to lure Wagner back to the game.

With Wagner’s addition, NWC had a full starting lineup plus one sub. But that wasn’t enough to be competitive in a stingy conference like NJCAA Region IX. The athletic director then looked within the school’s other programs.

He sent a mass email to every Northwest College undergraduate, gauging interest from the student body about potentially joining the women’s soccer team. Erickson set up an open gym for the interested students, where they could showcase their abilities and discover whether or not they’d want to play college soccer.

Three students came from an activity that ended its season just one week before NWC’s first match on April 4: livestock judging. Brooke Leidholt, Lauren Swan and Rachael Suhr all attended the unorganized practice, testing the waters of potentially playing soccer.

For Leidholt, a former volleyball and basketball player at Custer County High School in Miles City, Montana, she wanted to compete in a sport again.

“It was an opportunity to get back to sports and playing on a team,” she said.

The two admitted to doubting if they were good enough to play at the junior college level. But with the team needing players and livestock judging’s season over, they decided to give it a shot.

“I went to the open gym, just for the fun of it,” Swan said. “The girls ended up being super nice and it sounded like a really fun group, so I thought, ‘Heck, I might as well just join.’”

Suhr mulled the idea over for a little bit and talked to her family before making a decision.

“I initially thought that I wasn’t good enough,” she said, “but my mom said that if I didn’t want to do it, I wouldn’t have asked her for her opinion.”

A day after the open gym, the three livestock judges officially joined the squad.

While Erickson kept his mind open to anyone who wanted to play, he hoped to find at least one addition who had significant experience in the not-so-distant past.

He spoke to personnel within the athletic department, searching for potential players from NWC’s various teams. He found Kierra Cutright, a basketball player who previously played both soccer and basketball at Gillette College. Before college, she played soccer from the time she was in kindergarten to high school.

In her only season of basketball in Powell, Cutright was a centerpiece for the Trappers, averaging 6.5 points and six rebounds, the latter of which was a team high.

The sophomore initially didn’t want to play soccer at Northwest, with the time between sports being so short. But some convincing from her mother changed Cutright’s mind.

“They just needed extra girls, and my mom was saying, ‘You wouldn’t want your teammates to leave you like that,’” Cutright said. “So it was pretty much her telling me to come play.”

Two days after playing in the NJCAA Region IX women’s basketball tournament in La Junta, Colorado, on April 8, Cutright officially joined the team and made her NWC soccer debut on April 10.

Re-adjusting to the pitch

Because of the varying experience and skill levels of Northwest’s newest team members, it took time for the Trappers to become a cohesive group.

The first few games of the season weren’t pretty. Opponents outscored NWC 13-0 in its first three matches, including a 6-0 drubbing against Casper College to open the season. In the following two games, losses against Western Wyoming, the Trappers failed to record a shot on goal.

For the 11 players who were already on the roster, positivity was a struggle at first.

“I was frustrated and had a negative energy toward it because of how frustrated I was,” said freshman midfielder Riley Surratt, who joined the team in August.

With the team in shambles, Rob Hill’s leadership proved crucial.

Hill took over as NWC’s head coach in late March, after former coach Aaron Miller was fired in February. In the time between coaches, Erickson served as the acting head coach.

While Erickson brought five more players into the program and held numerous practices to keep it afloat, he admitted the team is in much better hands with Hill.

“I gave them everything I could, but you know, they did a great job with their resiliency of letting me coach them, knowing I’m not a soccer coach,” Erickson said. “You can see the difference of the quality of coaching he [Hill] has.”

“It’s just they have to learn some of the technical and tactical side of it, and there’s sort of a learning curve there,” Hill said of the new recruit.

Noticing the frustration from his veteran players, the coach told the more-experienced group to be constructive.

“He was like ‘You have to be a leader and most of these girls are less experienced,’” Surratt said. “It’s kind of a mindset thing for me, where I had to be like they’re helping us out and that’s what I was grateful for. That they were more than willing to help us out.”

In addition to ensuring that their feedback was constructive, Hill told his leaders to be descriptive.

“It’s been really specific instruction, whereas more experienced players would go ‘I understand that and why,’” he said. “Don’t just say move up; say move up 3 yards. There have been some teaching opportunities for them.”

And credit the five newcomers — they’ve been receptive. As NWC’s five newest members have learned more about the sport and adapted to college soccer, the team’s performance has improved.

The Trappers scored their first goal of the season in game four, a 4-1 loss to Otero. The scorer? Kierra Cutright.

The women’s basketball player was humble about the feat.

“My teammates have just helped me click,” she said.

Cutright’s soccer coach? Not so much.

“Don’t forget to say you had the first goal of the year!” Hill said.

After the Otero loss, NWC played its closest game of the year, falling 2-1 to Trinidad State. The Trappers had the match knotted at 1-1 but faltered in the second half, as the Trojans capitalized on a strong wind advantage. Still, NWC showed its ability to compete.

The next match, an April 21 tilt with Central Wyoming, Northwest reached the pinnacle of its steady improvement: its first victory.

Cutright notched her second goal of the season to put NWC ahead 1-0 early, then CWC responded with two scores, giving the Rustlers a 2-1 advantage. But Trapper Shyley Hunter scored two goals in the late stages of the match, sealing their first victory of 2021.

After three dismal matches to start the year, the positivity from Hill and his veteran leaders has paid dividends for the less-experienced players, leading to a vastly-improved team on the pitch.

“It hasn’t been as hard because the girls are nice and supportive,” Leidholt said.

Added Swan, “The girls have been super supportive and patient. We’re livestock judgers and didn’t know how to play. They’ve been really patient in teaching us all the rules and showing us the ropes.”

Not only have the late additions filled spots, they’ve all made impacts.

Cutright currently leads the team with three goals, Wagner notched an assist in the 3-2 win over CWC, and Leidholt, Swan and Suhr have started a combined 17 matches for the Trappers.

“We were afraid we weren’t going to have a season, and these girls have stepped up huge,” Erickson said.

They’re still not world beaters; NWC has won just once this year. But the squad’s consistent growth has been noticeable.

After three scoreless matches, the Trappers have scored seven goals in the last six outings. Even in losses, the scorelines have been closer. NWC kept a contest against Laramie County — the No. 3 team in the NJCAA rankings — to a thinner, 4-0 margin.

There’s still room to grow: Hill has lofty goals for the Trappers — goals that they’re still far away from attaining.

But the team’s development from an unorganized mess to a functioning, competitive group in just a few weeks’ span has provided a glimpse of what the program could achieve in the not-too-distant future.

Swan added, “We’re kind of a misfit group that kind of came together. We’ve been working really hard and we’ve come together as a team.”