A brief history of the grizzly

“I had a super career from my standpoint,” Bruscino told the audience at a recent presentation on grizzlies at Union Presbyterian Church of Powell. “I got my butt chewed on about a daily basis, but no, not by a bear.”

The former Game and …

A brief history of the grizzly 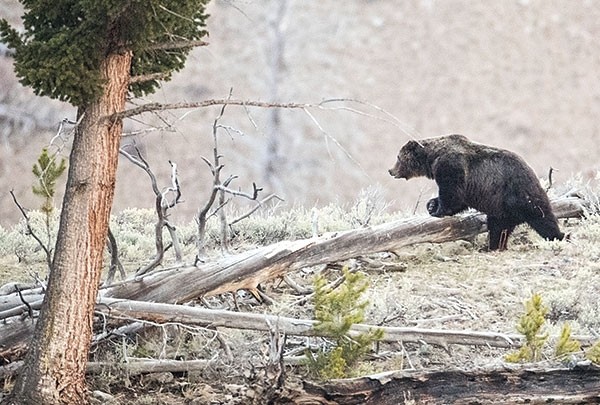 A grizzly makes it’s way across the Blacktail Deer Plateau in Yellowstone National Park on April 7. Hikers and outdoors enthusiasts are encouraged to be wary when in the park and other parts of grizzly country, as bears are waking from their winter slumber.
Photo courtesy National Park Service
Posted Tuesday, April 18, 2017 2:29 pm
By Don Cogger

Former Game & Fish supervisor lays out past, present and future of species

“I had a super career from my standpoint,” Bruscino told the audience at a recent presentation on grizzlies at Union Presbyterian Church of Powell. “I got my butt chewed on about a daily basis, but no, not by a bear.”

The former Game and Fish supervisor’s presentation covered a short history of the Yellowstone grizzlies, as well as the various theories of how grizzlies should be managed.

“They do cause some controversy, such as livestock depredation and occasionally human injuries as well,” Bruscino said. “But there’s also a lot of value to having these animals. They’re a valuable natural resource, just like an elk or anything else.”

When placed on the endangered species list in 1975, there were only about 130 grizzlies left in the Yellowstone area. Bruscino estimates that number has risen to about 750.

“I know there is a lot of controversy about the estimate, and we know it’s biased low,” he said. “But we can’t fix it. We’ve had some of the most incredible population biologists from around the world look at the estimate.”

What can be said, according to Bruscino, is that there are at least 750 grizzly bears in Greater Yellowstone Ecosystem, “so recovery over the last 35 years has been pretty successful.”

Once dominant in large portions of the northern hemisphere, grizzlies can still be found in the north islands of Japan, Russia, Mongolia, China, Afghanistan, the northern part of India, parts of the Middle East and eastern Europe. There’s even a small population of grizzlies in central Italy, as well as the French and Spanish Pyrenees. And, of course, North America.

“They live across a wide variety of habitat types,” Bruscino said. “They’re very adaptable; these animals are not fragile at all. They live everywhere, from the Arctic to, historically, down into Mexico.”

By 1922, grizzlies had all but disappeared from California, Nevada, Arizona, New Mexico, Utah and Oregon. Mexico’s final bear was killed in 1955. In 1979, a hunter shot a grizzly in the San Juan Mountains of Colorado, the last of its kind there.

Locally, the grizzly population has expanded in recent decades, with bears showing up on Heart Mountain and east of Meeteetse, as well as down in Lander, Pinedale and around Big Piney.

“The population is doing well, and all indicators are that it continues to grow and expand,” Bruscino said. “In my opinion, the good quality habitat is full. We don’t have very many other good places to put them, so that will be a problem for the next generation of wildlife managers to figure out.”

Across the lower 48 states, there are believed to be upwards of 1,700 bears — less than 1 percent of their historical population; Bruscino estimates there were about 250,000 grizzlies in the western U.S. prior to settlers moving in. He cited a number of factors as contributing to the decline in population.

For one, “a real and perceived threat to human safety,” Bruscino said. “Bears are big; they damage property, injure and occasionally kill people. When there was no regulation, they were viewed as an undesirable critter for the most part and were killed.”

Habitat quality and quantity contributed to the decline to a lesser degree. Livestock depredation also became a factor when the livestock industry began to boom in the West.

“There were notorious bears that had names that were livestock killers,” Bruscino explained. “They went on rampages that went on for years and years. Some big adult males really figured out livestock-killing, and killed a lot of cattle and sheep.”

In the late 1800s and early 1900s, the government led campaigns to eradicate bears, wolves and other predators that competed with the livestock industry. Most western states treated bears as varmints, with little or no restrictions on killing them. That didn’t change until the 1950s and 1960s, when sportsmen began to view black bears and grizzlies as a valuable game animal.

Some grizzlies are killed every year by elk hunters — most of them justified, self-defense situations, according to Bruscino. But elk hunting can also be good for bears. A study out of Montana estimates that elk hunters leave about 360 tons of meat on the ground in the Yellowstone ecosystem every year.

“Whatever doesn’t get packed out is a pretty substantial food source,” Bruscino said. “In fact, we’ve looked at radio-collared bears that move toward those heavily hunted areas. They’ve figured out, and in the fall they move to those areas because there will be an abundant food source.”

Grizzlies could be called the garbage disposal of the animal kingdom, as they will eat just about anything, according to Bruscino.

“I’ve seen them eat Spam in a can, hydraulic hoses, snowmobile seats, glass, everything you can think of,” he said. “They’re eating machines. Of course, they have to obtain the calories to live all year and about the six months they are out in hibernation. Those species are what we call ‘opportunistic omnivores.’ Basically, they will eat anything and everything they can find.”

Key foods include grasses, ungulates, roots and berries, moths, white-bark pine nuts and cutthroat trout, to name just a few examples. When the grizzlies come out of hibernation, the first places they go to are winter ranges to forage what’s left of winter-killed animals.

“There really isn’t that much to eat that time of year,” Bruscino said. “As the summer progresses, and the spawn starts, especially around Yellowstone Lake, there can be as many as 100 different bears that fish those tributaries to the lake.”

Bruscino has also seen bears fishing in Swamp Lake up in Crandall in the fall, when the brook trout are spawning, as well as other creeks in the North Fork. Grizzlies also feed on elk and their calves.

“There is a very short time period, three to four weeks, when the elk calves are young enough to be caught,” Bruscino said. “Some grizzlies hunt them extensively. You can go into Lamar Valley any June and watch six or eight bears hunting elk calves.”

About mid-July, Bruscino said about 200 of the grizzlies move up in elevation to high-elevation “insect sites,” which are populated with enormous numbers of the army cutworm moth. The moths spend the summer nights feeding on the nectar of wild flowers in the mountains; during the day, they burrow into the rocky slopes of the mountains to escape the sun. The grizzlies have figured this out, and can eat up to 40,000 moths a day.

“The moths are really high in fat and really high in protein,” Bruscino said. “We have about 50 sites, all in the Absaroka Range. This doesn’t occur anywhere else but right here in our own backyard. One site in particular has about 35 grizzlies on it from about July 15 to Sept. 15, feeding almost exclusively on these moths.”

This treasure trove of food keeps the bears off the valley floors and away from people and livestock, but only about a fifth of the Yellowstone bear population takes advantage.

“It’s fascinating to watch, if you’re ever riding up a trail and glass up on a slope and see a couple of bears up there, stop and watch,” Bruscino said. “They dig humongous holes trying to get at these moths.”

Delisting on the horizon?

Currently protected under the Endangered Species Act, grizzlies could be delisted as soon as the end of the summer, according to Bruscino. That likely would result in a trophy-hunting season for bears that venture outside of Grand Teton and Yellowstone national parks.

After his presentation, Bruscino answered questions about grizzlies, though discussion seemed to circle back repeatedly to the delisting of bears and wolves. The former management supervisor said the increase in population in both species has made it necessary for a change.

“Wolves and bears are a valuable natural resource, but we’re at the point with both of these populations where they need to be managed like game animals,” Bruscino said. “This is from a guy that doesn’t care to hunt either one of them, but was a manager of them. What my career and what my education taught me about how to manage these critters when they are as abundant as they are now, you manage them like game animals. That conserves them, as well as gives you the tools to deal with them.”