It was a jubilant occasion at the Meeteetse Schools’ gymnasium with speakers, T-shirts, a ferret mascot and, of course, black-footed ferrets. 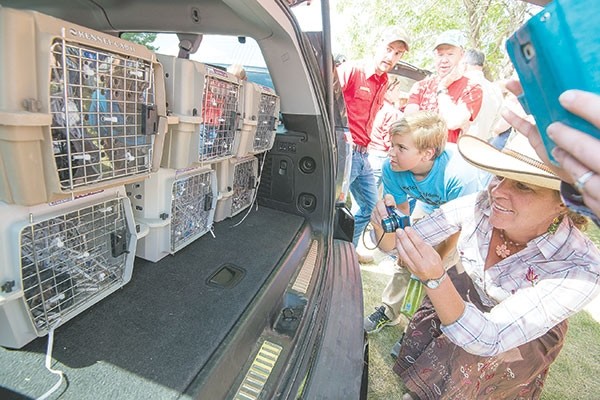 Federal and state officials and the Meeteetse community made history Tuesday, when 35 black-footed ferrets returned after a 35-year hiatus.

It was a jubilant occasion at the Meeteetse Schools’ gymnasium with speakers, T-shirts, a ferret mascot and, of course, black-footed ferrets.

Meeteetse Mayor Bill Yetter officially proclaimed July 26 as Black-footed Ferret Day to an audience of more than 100 well- wishers at the gym.

There have been heroic dogs portrayed on TV — actors with tails, such as Lassie or Rin Tin Tin.

But John Hogg’s dog, Shep, will go down in history as the canine who brought a ferret home to the Hogg ranch north of Meeteetse in 1981 to pioneer the resurrection of a species.

Thirty-five years later, 35 ferrets were returned to their rightful home and released on the Lazy BV and Pitchfork ranches.

“This is really a special event,” said John Emmerich, retired deputy director of the Wyoming Game and Fish Department and chair of the Black-footed Ferret Recovery Implementation Team.

Black-footed ferrets, the only ferret species in North America, were once thought to be extinct.

“Hope was diminishing that any were left,” Emmerich said.

Then Shep saved the day with a dead ferret. It remains a mystery whether Shep killed the ferret or simply found it. What is irrefutable is that Shep was pivotal to the ferret’s comeback.

John Hogg didn’t know exactly what sort of critter he had, so he tossed it over the fence after showing it to his wife, Lucille. But Lucille wanted it mounted. So they took it to a local taxidermist, Emmerich said.

The taxidermist had seen “ferret wanted” posters and told the Hoggs they had a ferret, Emmerich said. “That was the start of a remarkable recovery program.”

But the happily-ever-after ending was placed on hold.

In 1985, it was discovered that sylvatic plague and canine distemper were wiping out large numbers of both Meeteetse prairie dogs and ferrets, according to Game and Fish. To prevent extinction, 18 ferrets were caught and placed into a captive breeding program in hopes of reintroducing ferrets into the wild once the diseases could be controlled. The breeding facility was built in Sybille Canyon. In 2005, the back-footed ferret program was moved to a new facility near Wellington, Colorado, where the U.S. Fish and Wildlife Service took the lead on breeding several generations of ferrets.

Catching and hauling off their ferrets was not well received by Meeteetse residents.

“Controversy and pressure was intense,” said Bob Oakleaf, Game and Fish non-game coordinator in a Wyoming Wildlife article. But Oakleaf said he was certain the ferrets would be extinct had Game and Fish not captured the Meeteetse ferrets.

Oakleaf was instrumental in recovery efforts and worked closely with landowners, Emmerich said.

After several years of successful breeding in Sybille, enough ferrets were available to release in Shirley Basin, north of Medicine Bow, in 1991 according to Game and Fish. Since much of the area was private property and ferrets were an endangered species, as they still are today, a 10(J) designation was established for Shirley Basin.

The 10(J) is an Endangered Species Act rule that doesn’t penalize landowners if they accidentally kill a ferret. The same 10(J) rule applies in the Meeteetse area.

Meeteetse was the logical choice for reintroduction, but the plague there was still killing off prairie dogs.

At the time, there was no means to control the plague, Walker said.

Since then, Meeteetse’s population of white-tailed prairie dogs has rallied.

Shirley Basin has the plague now, but it is not overly active, Walker said. Meeteetse has the plague too, but prairie dog towns were treated with Delta Dust to kill plague-infested fleas.

Fortunately, a vaccine that kills plague-carrying fleas is being tested — a peanut butter type concoction that prairie dogs love.

There are 27 recovery sites, including one in Canada and one in Mexico, Emmerich said. Today there are approximately 300 ferrets making their way in the wild.

Landowner support is vital for reintroduction, along with financial support to control plague outbreaks, Emmerich said.

“Here we are, back where this whole thing started,” said Dan Ashe, Fish and Wildlife director.

Witnessing the return of ferrets to Meeteetse is history in the making, Ashe said. “This is like a pilgrimage for a wildlife person to come here.”

Shep is a household name in Meeteetse and wildlife-management circles, but Ashe loves hearing the story, he said. “It renews our hope we can make a difference. You here in Meeteetse are right here in the center of that universe.”

Lenox Baker took over management of the Pitchfork Ranch in 2010, he said.

Some landowners voiced concerns about working with the government on recovery efforts, Baker said. “My experience has been a fabulous one. I feel honored to be a part of it.”

Meeteetse wanted its ferrets back and Baker labored to convince Fish and Wildlife to return them, he said.

Private citizens, landowners and government employees pulled together to make the recovery happen, Ashe said. “The world will be a better place because it has something in it called a black-footed ferret.”

Lucille Hogg’s wish to have the beautiful animal Shep found mounted was granted 35 years later, when the Hogg family was presented with an elegant stuffed ferret.

“It was really a goal in my mother’s life to get that ferret mounted,” said Allen Hogg.

Virginia Moore of Lander, a documentary filmmaker, presented a trailer of the ferret film she is producing to be released next year.

All ferrets alive today are direct descendants of Meeteetse’s ferrets, Walker said in the documentary. “If it wasn’t for these guys, we wouldn’t have got it done.”

Dennie Hammer, retired Wyoming Game and Fish Department public information specialist in Cody, was in the early years of his career with the department when he worked graveyard shifts catching ferrets. Hammer recalls capturing the first ferret like it was yesterday.

Hammer saw a ferret’s emerald eyes flashing in the spotlight. “It just ran across the road and ran into a burrow,” he said in the film.

“Miss V, The Gypsy Cowbelle” of Thermopolis entertains Meeteetse on occasion with her sweet sounding plank banjo crafted from a coffee can, lumber and deer skin. V performed a synoptic song, “The New Kid in Town,” a black-footed ferret.

V garnered inspiration by sitting in a prairie dog town, she said.

“He’s all for one second one for all,

“The motto of a project with merit,

“A victory crowned for The New Kid in Town,

“Tis the tale of the Black-footed ferret.”

There is always an issue of prairie dog holes causing horse or cattle injury, but the main concern is stock competing with prairie dogs for grass, said Allen Hogg. But as long as prairie dogs remain on the high range, it won’t be a worry. His ranch has never made a concerted effort to kill prairie dogs either, he said.

Everyone has an unfavorable story about wolves or bears, but not ferrets, Hogg said. “He’s a user-friendly guy.”

Meeteetse is championing the ferret’s recovery, Hogg said. “I feel like it’s something as a community we can all get behind.”

The ferret’s return to Meeteetse is a momentous occasion, said Scott Talbott, Game and Fish director, just before the release.

Talbott thanked Fish and Wildlife and Ashe for their efforts and the 10(J) rule to make the reintroduction easier for landowners. “I can’t say thank you to you enough.”

“Hats off to our partners here on the land,” Ashe said.

At a prairie dog burrow, Pitchfork Ranch family members gathered to give the guest of honor its freedom. Within a cat carrier stuffed with shredded newspapers, the vexed ferret chattered and barked. Lest sharp teeth and claws lacerate fingers, the cage gate was opened carefully. Flexible conduit about 8 inches round was inserted in the hole from the cage.

To ferrets in captivity, the conduit resembles burrows, so they are comfortable crawling through it, said Nichole Bjornlie, Game and Fish non-game mammal biologist.

Still, like an inmate habituated to a cell, the ferret was reluctant to depart its safe haven.

“Reach in and grab him Allen (Hogg),” joked one of the onlookers lined up watching the show.

With a little encouragement, a tiny head poked out. Black-footed ferrets may be mean as snakes, but the little guy is cute as the dickens. A downy white muzzle, brown face and eyes ringed in black, like a teenager going Goth.

Finally, with a nervous snarl, the ferret dove through conduit and into the hole. The people applauded; one lady whooped. It was a stirring moment for all. People, all on the same page, with their hopes and prayers directed to the bandit-faced animal’s survival.

Six ferrets were designated for release at this site, with another 29 set free in another location nearby, Walker said.

The school gym was packed with people and the release area was well attended.

“I’m really stoked there was that many people there,” Walker said.

“Definitely a piece of history,” Walker said of the release. “Meeteetse’s name is synonymous with black-footed ferrets.”

The ferrets’ new home is a vast plain, like an inland sea of tall grass hemmed by rocky foothills segueing into distant mountains. Thunderstorms singled out a few ridges to the south. Bolts of lightning lashed the hills like snapping bull whips. It was time to go before the menacing storm disrupted the ferret party.

Gober had a vision for not only ferrets, but the entire ecosystem. He never took credit for his efforts, but instead gave credit to others in the ferret recovery, heralded worldwide.