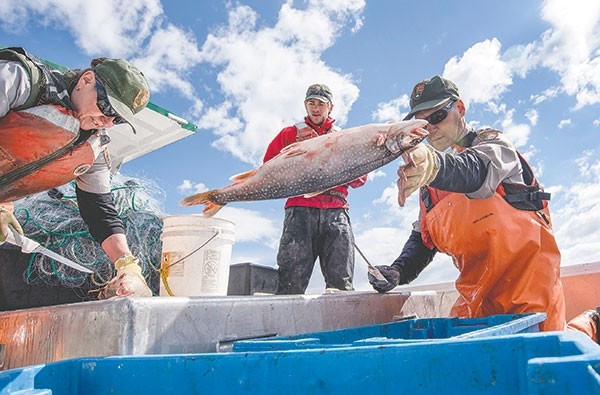 Phil Doepke throws a lake trout into a container after measuring, checking the sex of the fish and looking for tags while Pat Bigelow (left) and Ben Brogie assist. Lake trout were illegally stocked into Yellowstone Lake in the mid-’90s and crews have been working to remove the fish since. Lake trout eat the native cutthroat trout and, if left unchecked, the cutthroats would have disappeared from the lake.
Tribune photos by Mark Davis 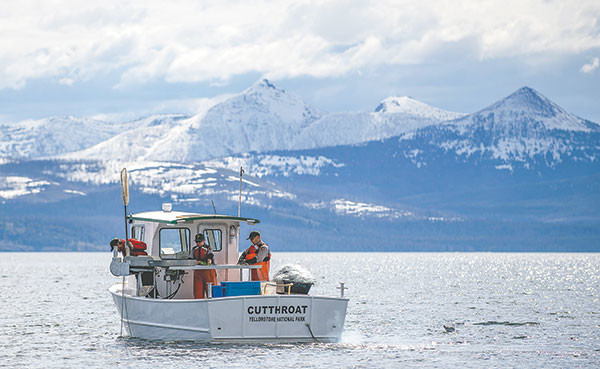 The crew of the Cutthroat, including Ben Brogie, Pat Bigelow and Phil Doepke, troll nets for lake trout, a nonnative species that eats the native cutthroat trout, in Yellowstone Lake. 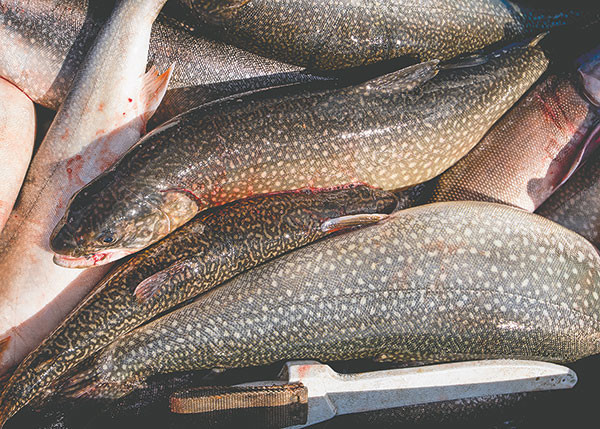 Lake trout with tags are kept in a container after being removed from Yellowstone Lake. The tags help scientists track the nonnative species. 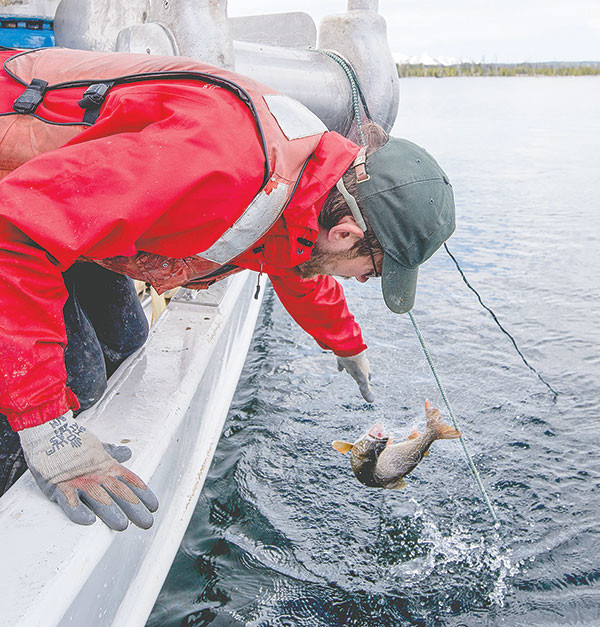 Captain Ben Brogie pulls in a lake trout caught in a net from the deck of the Cutthroat boat. 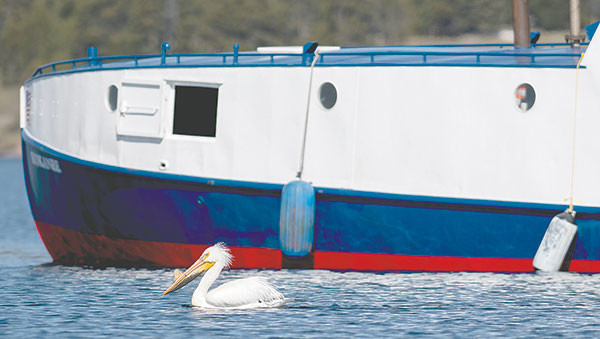 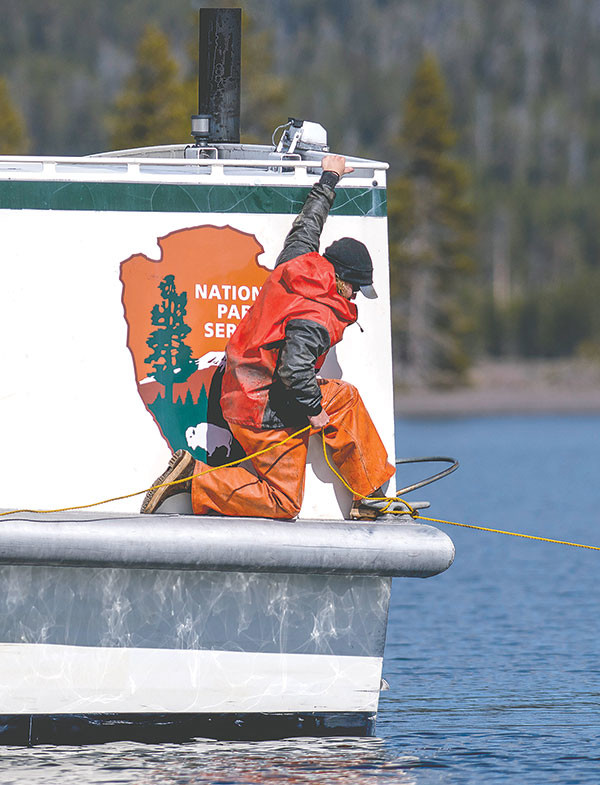 A Yellowstone park fisheries biologist works from the deck of the Freedom, a WWII vintage vessel turned into a fishing boat, to rid the lake of a large log that could damage boats. 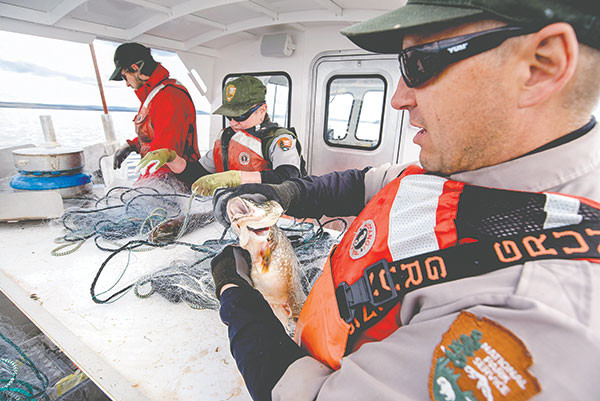 Phil Doepke (right), Pat Bigelow and Ben Brogie work to remove lake trout from their nets on the deck of the Cutthroat. Crews have been netting lake trout since their discovery in Yellowstone Lake in 1994 and hope to have the population collasped within the next decade.
Previous Next
Posted Tuesday, May 30, 2017 2:39 pm
By Mark Davis

From the banks of Yellowstone Lake, visitors snap selfies and landscapes in one of the most beautiful areas in the park, taking in the snow-covered peaks and wildlife-viewing thrill.

Yet few realize they’re helping to protect native species of Yellowstone cutthroat trout and fluvial Arctic grayling when they buy a fishing license — assisting an effort that has spanned more than two decades to rid the massive pool of lake trout, a nonnative fish that threatens the entire ecosystem.

The park’s fishing season opened Saturday, with those in the know catching the sport-fishing-prized species from boats and shore.

And if those fishing get lucky and the right spot is found, they can take home as much as they can carry — it’s illegal to return lake trout to the lake. That means no limits on size or numbers.

“They’re a wonderful fish, but they just don’t belong here,” said Phil Doepke, who has been part of the cutthroat trout conservation effort for 14 seasons.

Doepke is part of a team of scientists that has been working hard to remove the unwanted fish from the lake since the species was discovered there in 1994. Netting for lake trout started in 1995, but only in a discovery effort.

Dr. Todd Koel (pronounced Cool) has been leading the team for 17 years. He and his crew have been creating more efficient ways to remove lake trout every season. Currently, they’re surgically implanting transmitters in individual lake trout and releasing them to study their patterns.

“The Judas fish lead us to their friends, and then we kill them,” Koel said.

The team recently started using small aircraft to search the lake for the tagged Judas fish. A plane can cover the entire lake, which is approximately 22 miles long, in a couple hours. Travel by boat is far less efficient.

The team is still using nets; there are 35 to 40 miles of nets in the lake every day, from ice-out in the spring until the lake freezes over again in the fall. But even the netting effort is becoming more efficient, thanks to the big brains on the boats and in the lab. The use of nets occasionally leads to mortality of cutthroats, but the ratio of caught lakers to cutthroats is very high thanks to studies in net size, depth and patterns used as they are deployed.

Doepke and other team members on the boat are extremely competitive.

“I believe I’ve taken out more lake trout than anyone else,” Doepke said. He has served as a boat captain for 14 seasons. Doepke did his master’s thesis on Yellowstone cutthroat trout.

“This is my 20th season,” she said, wearing a fishing cap that looked to have at least two decades of fish gut stains on the bill and staring down Doepke with a competitive smile.

The team has removed 2.6 million pounds of lake trout since 1996 — including more than 366,000 pounds last year alone. And that doesn’t include the fish that were never able to grow: Research has led to more efficient ways of attacking the eggs at spawn sites.

“Lake trout are in decline, but it doesn’t happen overnight,” Koel said.

As the team of scientists becomes a more efficient fish-killing machine, there is an end in sight.

“Models predict the collapse of the population within another 10 years,” Koel said.

Doepke encourages fishermen to get to the lake and help soon.

Boat captain Ben Brogie points out some great areas for shore fishermen to try their luck. He cited the north part of the West Thumb as the best place to cast a line right now, but also suggests Angler’s, Sand and Gull points for catching lakers.

“Use a spoon with yellow and orange spots — something that looks like a small cutthroat,” Brogie suggests.

A park fishing permit is required for anyone putting a line in the water, but a Wyoming license is not necessary to fish on the lake. A three-day license is $18, a seven-day license is $25 and an annual permit is $40. Live bait is forbidden in the lake, and all cutthroat trout must be returned to the water unharmed.

More than 50,000 visitors buy permits each year. While lake trout fishing is great right now, anglers had better hurry before Dr. Koel and his gang of scientists work themselves out of a job.