Despite a flu bug sweeping through the area and at Powell High School, the Panther wrestling team sent two teams to different varsity wrestling events in both Gillette and Worland, with the young … 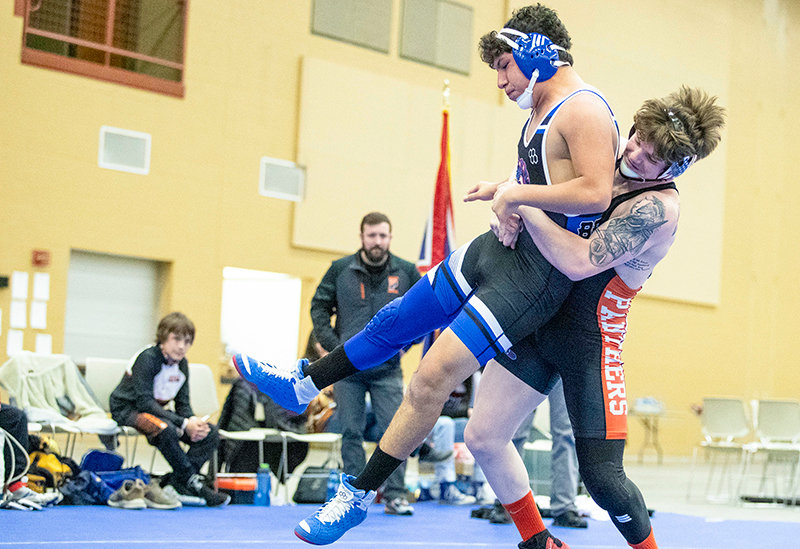 Panther junior Stetson Davis picks up Gabe Lopez of Douglas during their Friday dual. Davis pinned Lopez in 1:39, and finished 8-1 on the weekend against top competition in the region at the Pat Weede Memorial in Gillette.
Photo courtesy Mike Moore, Gillette News Record 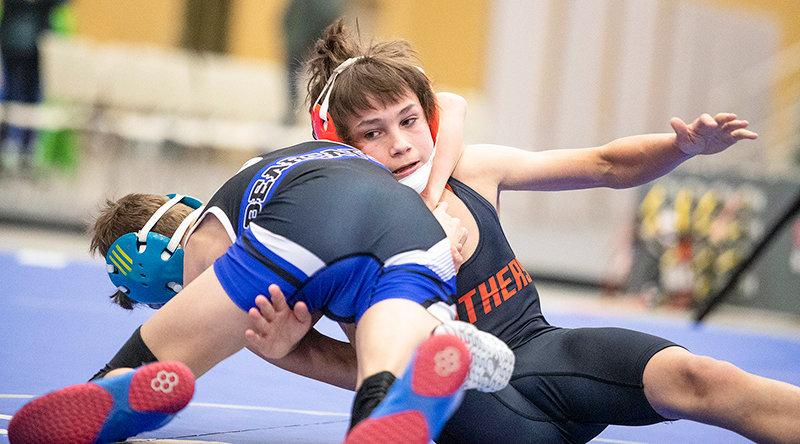 Panther freshman Wyatt Nicholson attempts to hold off Tanner Johnson of Douglas in the 106-pound weight class on Friday. Powell wrestled against teams from around the state and region at the Pat Weede Memorial in Gillette.
Photo courtesy Mike Moore, Gillette News Record
Previous Next
Posted Tuesday, December 21, 2021 8:15 am
By Seth Romsa

Despite a flu bug sweeping through the area and at Powell High School, the Panther wrestling team sent two teams to different varsity wrestling events in both Gillette and Worland, with the young squad picking up vital varsity experience early in the season.

A group of Panthers went off to Gillette to take part in the Pat Weede Memorial, a tournament where the team took part in nine duals over two days against primarily 4A and out-of-state competition.

“We limped into Gillette after a rough week of practice and kids being sick all week,” Panther head coach Nick Fulton said. “The teams and the caliber we wrestled was phenomenal.”

In the first matchup of the weekend, Powell dropped a contest to one of the event’s hosts, Campbell County, 51-30. In that matchup, Panther Wyatt Heffington earned a victory at 126 pounds, along with Karson Lamb at 170, Stetson Davis at 182, Jimmy Dees at 195 and Adam Flores at 285. All decisions were via pin. Jack Van Norman lost a close decision at 152 by a score of 6-5.

The second match of the weekend again pitted the Panthers against another 4A competitor, dropping a 66-18 contest against Natrona County. In that matchup, Davis, Dees and Flores all won their contests.

Another 4A school in Rock Springs awaited in the next match, but the Panthers took down the Tigers by a score of 54-30. Lannon Brazelton got a victory at 160 pounds and Wyatt Nicholson won via forfeit at 106, while Davis, Dees and Flores continued their winning ways.

The Panthers’ first and only 3A competition came in the fourth contest of the weekend, as Powell dropped a close contest against Douglas, 45-33. Heffington, Brazelton, Lamb, Davis and Flores all got victories with Van Norman earning a victory by forfeit at 152.

In a return to 4A competition, the Panthers matched up with Sheridan in Friday’s final dual, losing by a final score of 54-30. Lamb, Davis, Dees, Flores and Nicholson all earned victories, with Davis and Flores winning by forfeit.

The team’s tough competition continued in a match against the other hosts, Thunder Basin, on Saturday, where the Panthers dropped the dual 55-24. Nicholson, Kaiden Apodaca, Brazelton and Davis all won by forfeit.

The weekend ended against out-of-state competition, as the Panthers lost to Scottsbluff, Nebraska, 68-12; to Sidney, Nebraska, 63-18; and to Bismarck, North Dakota, 54-24.

In the Scottsbluff dual, Heffington and Dees got victories by pin while Davis, Dees and Flores all won by pin against Sidney. Against Bismarck, Nicholson, Davis and Dees all earned victories with Van Norman getting a win by forfeit.

“We learned a lot, and the kids got better this weekend,” Fulton said. He noted that Davis went 8-1, losing and only lost to a medalist from Nebraska.

This early in the season, Fulton said it was important for the kids to get out and wrestle nine times in two days and see the improvement from match-to-match. The coach said he was proud to be within striking distance of winning matches against higher competition, and is hoping these early matchups will help his younger competitors understand this level is different.

BATTLE IN THE BIG HORNS

A separate team of wrestlers was sent just south, to the Battle in the Big Horns in Worland.

Fulton sent his slightly less experienced wrestlers to take part in six dual matches as he attempts to figure out his varsity roster early in the season.

With a roster primarily made up of freshmen and sophomores, the PHS team took on Lovell in the first round of competition, and lost 45-27. Case Bradish at 132 pounds, Andrew Valdez at 138 and McKale Foley at 145 all earned victories, with Dusty Carter at 182 and Zain Younas at 285 getting victories by forfeit.

The second dual for the weekend saw a matchup with Newcastle/Upton, with the Panthers dropping the contest 54-28. Bradish and Valdez got victories while Jonathan Harms at 195 and Sam Childers at 113 won by forfeit.

The toughest match came against hosts Worland, where the young Panthers lost 76-6. Younas was the lone victor by forfeit.

Finishing off Friday, the Panthers lost to Rawlins, 48-34. Foley, Harms and Jacob Eaton at 220 all earned victories and Younas won by forfeit.

Going into Saturday, the Panthers picked themselves up and lost a tight contest to Buffalo 34-30. Bradish, Valdez, Carter, Harms and Eaton got victories by pin.

The young squad earned their lone victory of the weekend in the silver bracket, a fifth-place matchup against Rock Springs with a 45-18 win. Hunter Walker at 170, Harms, Bradish and Valdez all earned victories. Merced Jordan-Silva at 160, Carter, Eaton, Younas and Childers all won by forfeit.

“Getting a dual win is pretty impressive for them being a lot of freshmen and sophomores,” Fulton said.

The team is set to return to action on Jan. 7-8 at an invitational in Bozeman, Montana.