Yellowstone is open for business to celebrate 150th anniversary

Jenny Catone and her kids thought it would be fun to head to Yellowstone National Park’s East Entrance for the season opener. They were so excited about their first adventure in their …

Yellowstone is open for business to celebrate 150th anniversary

Tommy Catone, in his pith helmet, finally gets his wish to enter Yellowstone National Park through the East Entrance while his mother, Jenny Catone, purchases a pass into the park from lead recreation fee technician Jeff Moynihan. The family, including Lily and Sophia, had waited 11 1/2 hours to enter the park for the season opener at 8 a.m. Friday.
Tribune photo by Mark Davis 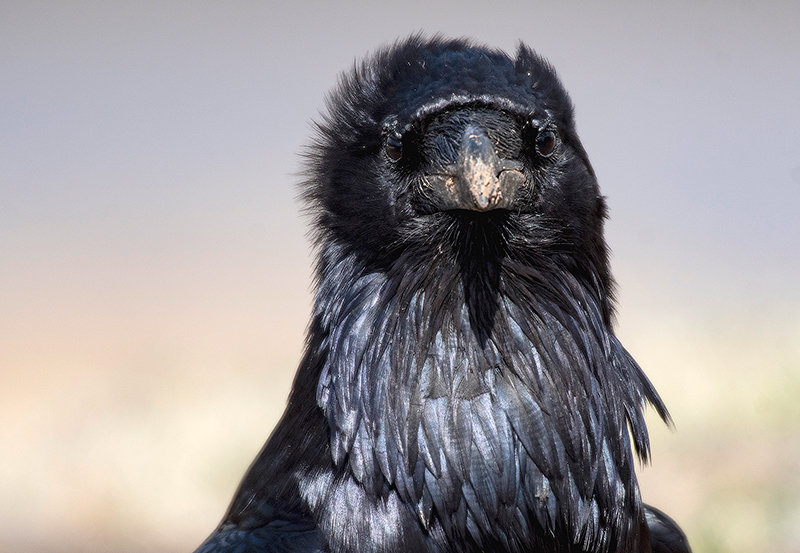 A curious raven looks to forage from visitors eating lunch in the Lamar Valley Friday. While nobody shared their food, the raven was persistent, giving wildlife watchers a close-up view of the species. it’s prohibited to feed wildlife in the park.
Tribune photo by Mark Davis

A western grebe seemingly keeps an eye on a flock of shorebirds including black-necked grebes (also called eared grebes) and American coots. The group may have bunched up to fend off predation by nearby American bald eagles.
Tribune photo by Mark Davis 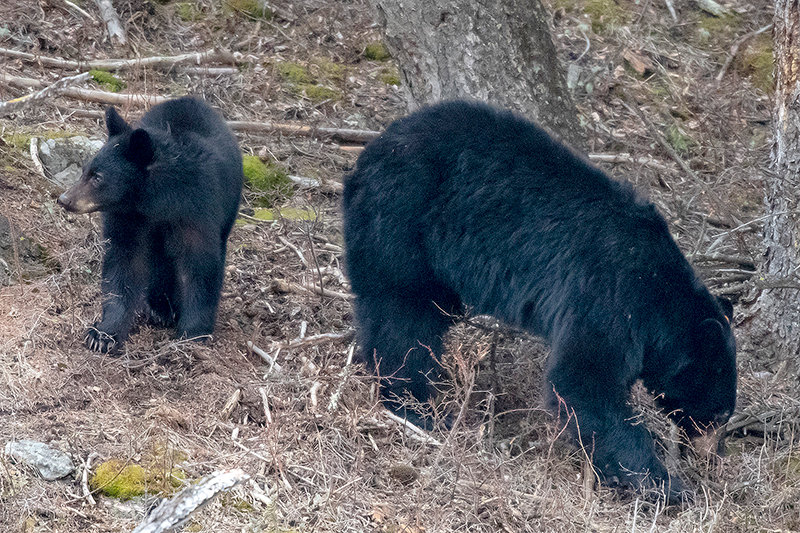 A black bear sow and her cub browse for roots and insects on a hillside near Blacktail Deer Plateau in the northern section of Yellowstone National Park. Visitors exclaimed “Happy Mother’s Day!” to the sow while they browsed for lunch near the road.
Tribune photo by Mark Davis 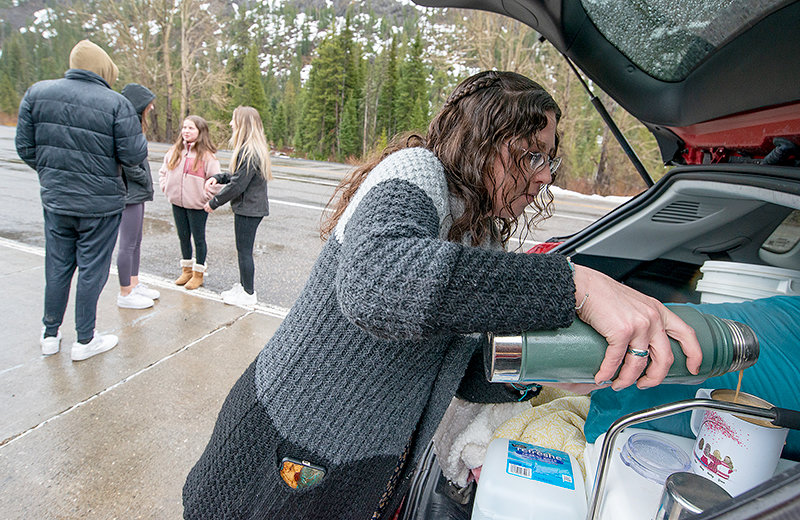 Stacy Boisseau of Powell pours a much-needed cup of hot coffee while her family and friends celebrate the moments before Yellowstone National Park opened for the 2022 season. The Boisseau/McIntosh family have been first in line to enter the park through the East Entrance for the past four years.
Tribune photo by Mark Davis 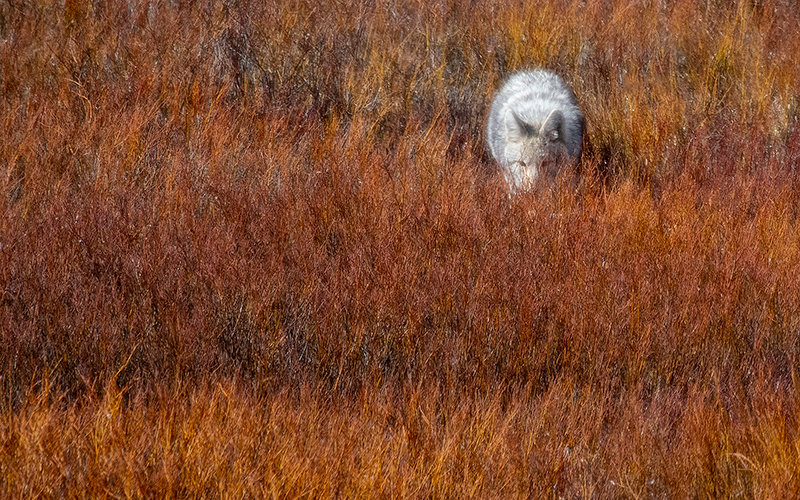 A coyote stalks prey in Hayden Valley Friday. Sometimes mistaken for wolves, coyotes (also called prairie and brush wolves) are smaller than its close relative, the wolf.
Tribune photo by Mark Davis
Previous Next
Posted Tuesday, May 10, 2022 8:25 am
By Mark Davis

Jenny Catone and her kids thought it would be fun to head to Yellowstone National Park’s East Entrance for the season opener. They were so excited about their first adventure in their new-to-them vehicle that they left Powell at 7 p.m. the night before the gates swung open.

“We got here last night about 8:30 and slept in the van,” she said with a happy smile and showing no ill effects from the experience.

They wanted to get to the gate to experience sunset, but chores slowed their departure. Early that morning Catone saw a dark shadow moving toward the family van parked near Yellowstone’s famous wooden sign.

“I was just kind of looking out and I just saw this black form,” Catone said. “I was like, oh my god, it almost looks like a gorilla.”

Her children, Tommy, Lily and Sophia, thought she was making it up, Catone said. But the bear was close, as they soon smelled. The bruin was in serious need of a bath, they said, commenting on the large, stinky beast sniffing around outside the doors of the vehicle. The sight ended all outdoor exploration until sunrise.

“Nobody was going to the bathroom,” Catone said, adding, “I slept with bear spray on my lap.”

Their arrival would have allowed the family to be first in line for the season opening during Yellowstone’s 150th anniversary celebration. Catone wasn’t sure of the rules for parking in front of the gate, so they used the wide pull-out to wait for a sign.

That sign was Stacy Boisseau and her crew passing them to take the first spot in front of the locked red-and-white swing arm. It’s the fourth year in a row the family was able to get the coveted spot.

Being first in line is serious business for the family. Boisseau was coy with their schedule, attempting to protect their travel secrets. But she failed to swear Catone to secrecy, who said Stacy had arrived around 9:30 p.m.

Shortly before 8 a.m. the next morning, the Boisseau and McIntosh family piled out of their two vehicles and proceeded to get group photos. “It’s a family tradition,” Boisseau, a waitress at the 8th Street at the Ivy restaurant, said while pouring a cup of steaming hot coffee from a thermos in the back of their over-packed SUV.

By the time Jeff Moynihan, the lead recreation fee technician on this end of the park, radioed headquarters that the gate was officially open, the line of trucks and cars waiting for their chance to get into the park snaked around the curve into Shoshone National Forest. He has been living at Yellowstone since shortly before Christmas, forced to snowmobile to work — at times at the North Entrance adjacent to the Roosevelt Arch.

Moynihan is originally from Massachusetts and being a park ranger runs in the family. His parents both worked for the National Park Service’s Cape Cod National Seashore. He got his start at Cape Cod, then moved to Wyoming for his new job in 2021. It wasn’t easy.

With snow already blocking the road to his new home at the entrance, he was forced to make several trips carrying his gear by snowmobile, his first experience in over-snow travel.

“I made like five trips back and forth from Cody to the entrance. And then, throughout the winter, it was just a really great experience getting to learn to snowmobile for the first time with the great rangers we had out here with us for the winter season,” Moynihan said.

Through the winter Moynihan experienced quite a few wildlife sightings, including a great gray owl. He’s excited for the end of the month when the road across Dunraven Pass will finally be reopened. The road is tentatively scheduled to open May 27, pending snow-removal operations, he said. “I’ll finally get to go to Mount Washburn and hike up there.”

Constant trips across the park were exciting for the new full-time employee. “We’re ready and we’ve got everything set up to go,” Moynihan said as he prepared for his first customers of the season.

“The main thing in the spring, as always, we have Sylvan Pass over here. Conditions are variable every day. If it’s a sunny spring day, a lot of snow starts to melt that loosens up the pack. So there’s avalanche danger.”

He also pointed out the many events scheduled for the park’s 150th anniversary.

Wyoming Gov. Mark Gordon was on hand Friday at Old Faithful to help kick off the celebration.

“You can feel the magic of this place and why people said we need to preserve this,” he said for news crews covering the event.

The facility is one of several initiatives commemorating the anniversary — part of a larger effort to work with tribes to expand their presence and better represent Indigenous connections to the park during its sesquicentennial celebration.

“Yellowstone’s 150th anniversary is an important moment in time for the world,” Sholly said. “It’s an opportunity for us to reflect on the lessons of the past while focusing our efforts to strengthen Yellowstone and our many partnerships for the future. I applaud and share the vision of Secretary Haaland and Director Sams on our responsibility to more fully engage with tribal nations to honor and learn from their ancestral and modern connections to Yellowstone.”

The park will host and participate in a wide range of activities to commemorate the 150th anniversary, according to a recent press release. “The park has conducted substantial outreach to Native American Tribes, inviting them to participate directly in this anniversary. Multiple Tribal Nations will be present throughout the summer at Old Faithful as part of the Yellowstone Tribal Heritage Center project.”

Regional tribes are also coordinating with Yellowstone to install a large tepee village in the park near the Roosevelt Arch in August, where tribal members will interact directly with visitors about their cultures and heritage.

The University of Wyoming College of Law and Haub School of Environment and Natural Resources will host a symposium marking the park’s anniversary May 19-20. The two-day event is open to the public both in person and online and will feature prominent figures from the National Park Service and elsewhere within the Department of the Interior, including numerous Yellowstone-associated Native American Tribes.

They will be joined by a host of academics, scholars, scientists, and other participants. The historic event will explore the goals, successes, and shortcomings of the park over the past 150 years and look to the future to examine key issues it now faces.

To register for the symposium: www.uwyo.edu/haub/ruckelshaus-institute/forums/ynp-150th-symposium/