Wyoming is well on its way to becoming the first state to offer a cryptocurrency asset.

Legislation that would offer a stable token passed a second reading in the House Wednesday, with a … 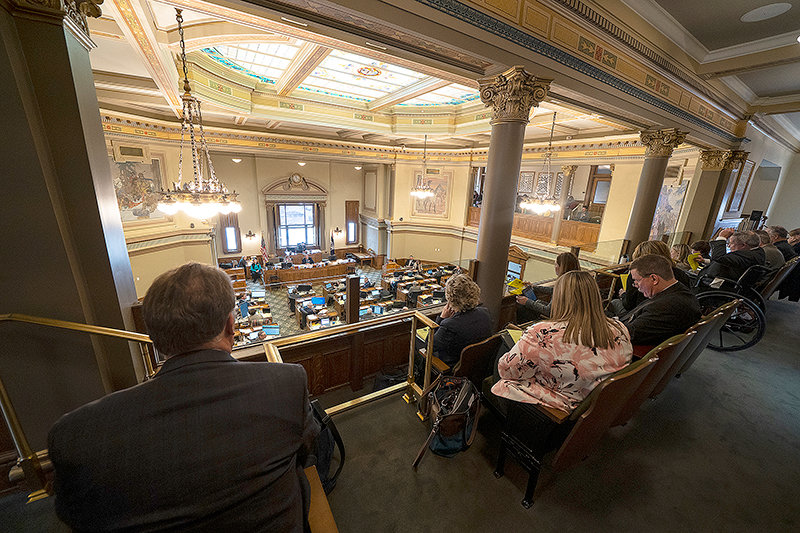 The Wyoming House of Representatives is considering a bill that would allow the treasurer’s office to create and offer a new cryptocurrency-related product called a stable token. Offering the token would potentially generate additional revenue for the state.
Tribune photo by Michael Smith
Posted Thursday, March 10, 2022 8:20 am
By Mark Davis

Wyoming is well on its way to becoming the first state to offer a cryptocurrency asset.

Legislation that would offer a stable token passed a second reading in the House Wednesday, with a final reading expected today (Thursday) that could put the Cowboy State on track to offer the $1 token worldwide.

The token, which has yet to be named, would be backed by 1 for 1 investments in United States treasury bills and held in trust by the state, with hopes of earning the interest from the investments. The entire cryptocurrency segment is currently worth close to $2 trillion, with stable tokens and coins being used to buy and invest in tokens and platforms and serve as a store of value.

The largest stable asset, called Tether or USDT, currently has a market cap of more than $80 billion.

“Five years ago, the market cap for these stable coins was a couple of billion dollars. This year, it has eclipsed $150 [billion],” said Rep. Cyrus Western, R-Sheridan. “So what’s the advantage to us? First mover advantage. Any company, state, nation, or society who executes upon first mover advantage, reaps the benefits.”

Profits from the sale of the token would be used to increase funding to the common school account and the permanent Wyoming mineral trust fund.

Senate File 106 wound send the crypto-friendly state further down the path of the sometimes confusing digital monetary segment. Representatives, some who clearly are taking their first step into crypto, had a slew of inquiries during Tuesday’s first reading on the House floor.

“While I was down there in the rabbit hole, I ran into a prairie dog and then took a turn. And then I think I found a burrowing owl. So I have a couple of questions,” said Rep. Sue Wilson, R-Cheyenne.

Among the questions raised during Tuesday’s debate was whether those purchasing the digital-only asset could bring gold or silver to the state treasurer to buy tokens.

“The token isn’t going to be [available for] physical purchase,” explained Rep. Jared Olsen, R-Cheyenne. “I don’t envision someone walking in with a bar of gold and setting it down in the treasurer’s office and then receiving some tokens.”

Olsen also explained that the token would be sold internationally and there would be no way for the state to restrict purchases to just U.S. citizens.

“You need to be able to capture the market and you want to be able to sell these to anyone outside of Wyoming, certainly, because our population is just not big enough to to generate enough revenue,” he said, adding, “we will have no way to control, at the end of the day, what [purchasers] use the token for once they have it.”

Currently, 16% of adults in the country say they personally have invested in, traded or otherwise used crypto assets, according to a 2021 Pew Research Center survey. They found young Americans are more likely to have cryptocurrency wallets (31%) and men are twice as likely to have invested in the segment than women.

“Among both men and women, the likelihood of having invested in, traded or used cryptocurrency decreases with age,” the Pew said in the release of the survey.

While the token would be the first offered by a U.S. state, it’s not the first state entity to dip its toes in the crypto world.

The University of Wyoming’s Center for Blockchain and Digital Innovation received $500,000 worth of ada — the native token of a blockchain called Cardano — in 2020 from Input Output, the company that developed the technology behind the chain. The currency was selling for about 5.5 cents at the time. One ada was worth about 84.5 cents on Wednesday — though down substantially from a September peak of $3.10 — which means if the university held on to the gift, it would currently be worth about $7.6 million.

In November, founder and CEO of the Harmony blockchain Stephen Tse became the latest global industry leader to join the advisory board for UW’s Center for Blockchain and Digital Innovation. Tse has been impressed by Wyoming’s early adoption of cryptocurrency.

“Wyoming has quietly become an epicenter for blockchain innovation, and I am proud to join the ranks of other esteemed individuals committed to making blockchain more accessible and scalable to unite more communities and build a brighter world,” he said.

A UW partnership with cryptocurrency exchange and bank Kraken was announced in July, when the company made a $300,000 gift to the university to assist students with opportunities that lead to careers in cryptocurrency. The gift, given over three years, will launch a multi-year education effort designed to prepare the next generation in an economy powered by digital assets.

“This gift from Kraken enables our continued growth in advanced research that sits at the intersection of security and blockchain,” said Assistant Professor of Computer Science Dr. Mike Borowczak in a recent press release.

The pledge establishes the Kraken Excellence Fund that benefits UW students studying cryptocurrency, as well as other students in the state.

“On our 10th anniversary, we’re setting our sights on the future by investing in expanding access to quality education on Bitcoin and cryptocurrency,” said Jesse Powell, CEO at Kraken. “We hope the program will capture imaginations and contribute to a better financial future for Wyoming and for the world.”

The partnership is Kraken’s largest ever commitment to furthering the study of digital asset technologies and represents an expanded presence in Wyoming following the 2020 launch of Kraken Bank, which became the first U.S. crypto firm to receive a state-chartered banking license, obtaining it under a first-of-its-kind Wyoming law.

Senate File 106 will be read on the House floor for the third time today (Thursday). If it passes, and the Senate concurs with changes made by the House, the bill will be sent to the governor’s office for a final sign-off. It initially cleared the Senate on a 24-6 vote, with Sens. R.J. Kost, R-Powell, and Tim French, R-Powell, voting aye.