The Biden administration announced last week that 125 ecosystem restoration projects in 20 states, tribes and territories will receive nearly $68.4 million in fiscal year 2022 from the Bipartisan … 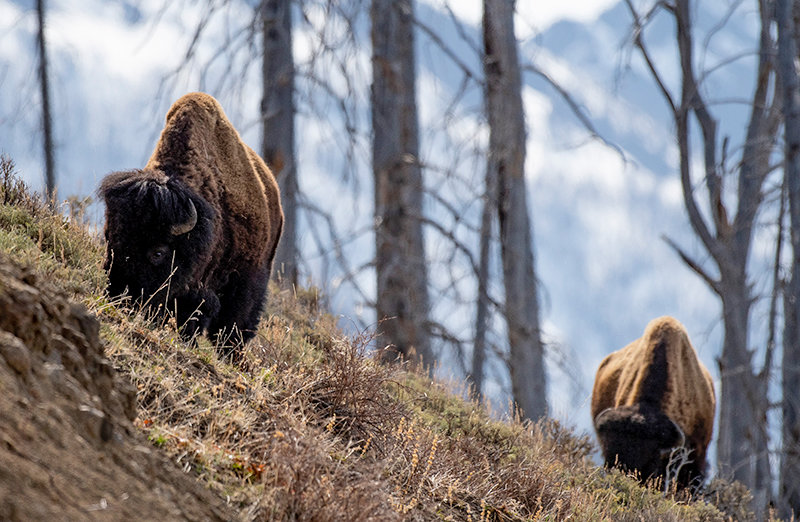 Bison browse near Lake Butte overlook in Yellowstone National Park. The Bipartisan Infrastructure Law has awarded more than $68 million in funds to 125 ecosystem restoration projects in 20 states, including Wyoming. The funds will be used to increase accessibility, fight invasive species and protect sensitive ecosystems, including in national parks.
Tribune photo by Mark Davis
Posted Tuesday, May 17, 2022 8:15 am
By Mark Davis

The Biden administration announced last week that 125 ecosystem restoration projects in 20 states, tribes and territories will receive nearly $68.4 million in fiscal year 2022 from the Bipartisan Infrastructure Law. The question is: What does Wyoming stand to gain from this round of funding?

A total of $1.4 billion will be spent for Department of the Interior investments in ecosystem restoration efforts over the next five years.

“President Biden’s Bipartisan Infrastructure Law is a once-in-a-generation investment that will allow us to restore healthy ecosystems across the country,” said Interior Secretary Deb Haaland. “This is an important step towards building a better America for people and wildlife, for generations to come.”

The Department of the Interior is collaborating to invest millions of dollars annually to restore habitat connectivity for aquatic species around the country and advance habitat restoration, invasive species control, conservation of at-risk and listed species and benefits to several significant ecosystems, including sagebrush steppe.

The only Wyoming-specific funding in this year’s spending plan is $32,000 to fund Good Neighbor Agreements in the North Prong area in Sheridan County. In addition, the Bureau of Reclamation will receive $100,000 to create a recreation lands weed inventory. No other details were provided by the Department of Interior and the programs appear to be the only funds specific to the Cowboy state. But there are several shared or national campaigns that might bring funding home.

Funds for recreational opportunities on Bureau of Land Management (BLM) public lands that Wyoming will share include $1.34 million to increase recreational access and accessibility and $517,000 to mitigate impacts to sensitive lands and promote public safety. Other shared programs include $500,000 funding to the U.S. Geological Survey to optimize resilience and adaptation for restored native seedings in sagebrush steppe.

The National Park Service will receive $200,000 for the same sagebrush program and will receive an additional $220,000 for increased native seed production for restoration in intermountain national parks.

Will Wyoming benefit from these programs? Yes.

Did the state score large project funding compared to other states? Probably not.

More than $3 million of the $68 million has yet to be earmarked for programs.

World's Most Expensive Sneakers Will Order Your Pizza

Better Immunity is Just a Spray Away