WYDOT announced seemingly uncontroversial plans in late December to use message signs to remind motorists of posted speed limits and the presence of wildlife along the North Fork Highway. But when a … 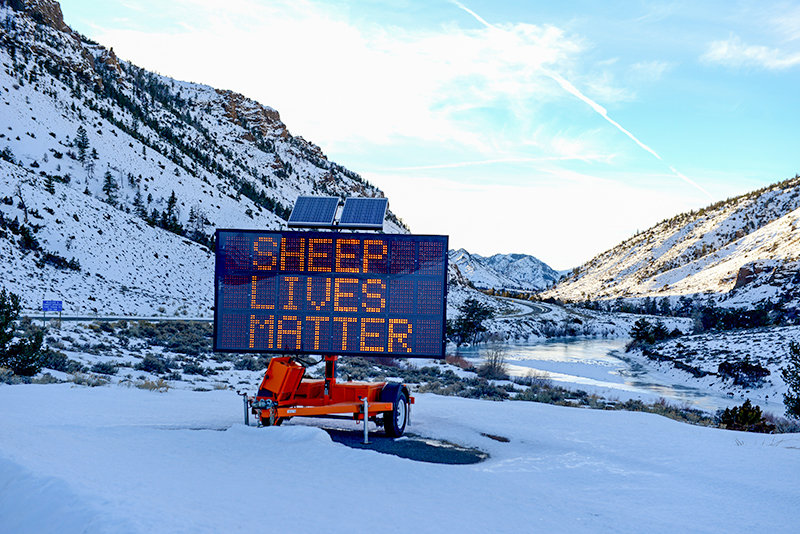 A Wyoming Department of Transportation message sign warns motorists to be aware of bighorn sheep on U.S. highway 14/16/20 at the boundary of the Shoshone National Forest near Wapiti. Some local residents were unhappy the message seemed to mock the Black Lives Matter movement.
Tribune photo by Mark Davis 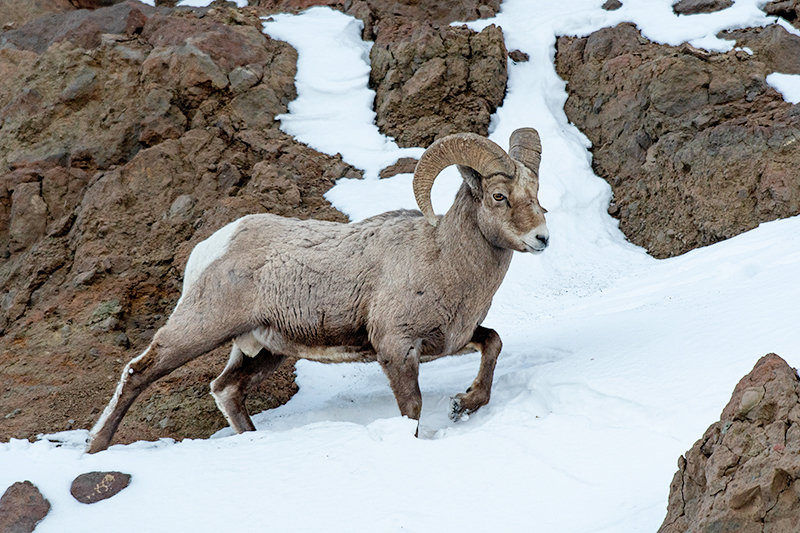 A bighorn sheep ram navigates a steep snow-covered cliff near the East Entrance to Yellowstone. Herds of sheep are near the road at this time of year, avoiding deep snow at higher elevations.
Tribune photo by Mark Davis
Previous Next
Posted Thursday, January 13, 2022 8:10 am
By Mark Davis

WYDOT announced seemingly uncontroversial plans in late December to use message signs to remind motorists of posted speed limits and the presence of wildlife along the North Fork Highway. But when a message on a sign at the entrance to the Shoshone National Forest proclaimed “Sheep Lives Matter,” it drew concerns from some who say it mocks the Black Lives Matter movement.

“I feel WYDOT’s use of ‘Sheep Lives Matter’ is in poor taste,” said Melissa Maier, an activist for racial justice from Cody. “There are so many other ways to get the point across and this feels misguided, especially for a state department. It reads more as a mockery of [Black Lives Matters] than as a cheeky joke, and that’s the issue.”

“I don’t know why they had to go where they did,” said wildlife photographer Amy Gerber. “I love the bighorn sheep as much as anyone but think they could’ve chosen a phrase that wouldn’t cause controversy.”

The sign was installed to bring awareness to motorists and to protect wildlife on the highway and a maintenance worker for the department created the message, said Cody Beers, a regional spokesman for the department. But, he said, it “apparently upset some people.”

After the WYDOT began receiving calls from the public, the message was changed.

“There was no harm intended to anyone,” he said.

Every year, more than 6,000 deer, pronghorn, elk and moose are reportedly hit by vehicles on Wyoming’s roads. The accidents cost nearly $50 million annually in damages to vehicles, human injury expenses and loss of wildlife.

A black bear and a grizzly were killed in vehicle collisions on the North Fork Highway in September, prompting calls from the Game and Fish and WYDOT for motorists to slow down.

“As winter sets in and seasonal recreational activities on the North Fork begin, traffic typically increases along the North Fork corridor, which can lead to an increase in collisions with bighorn sheep, mule deer or elk,” Game and Fish officials warned in a recent plea for drivers to use caution while navigating the North Fork (U.S. 14/16/20) and South Fork (Wyo. 291) highways near Cody.

Game and Fish, Wyoming Department of Transportation, Shoshone National Forest and Sleeping Giant Ski Area are working collaboratively to raise awareness about wildlife on roadways and minimize wildlife-vehicle collisions for the safety of motorists and wildlife.

As of Tuesday, the Game and Fish hadn’t received any reports of bighorn sheep being killed on the North Fork Highway this winter.