Albertsons has begun work to convert the former Shopko building into a grocery store.

A contractor working on the property, located at 1005 Coulter Ave., recently applied for two building permits … 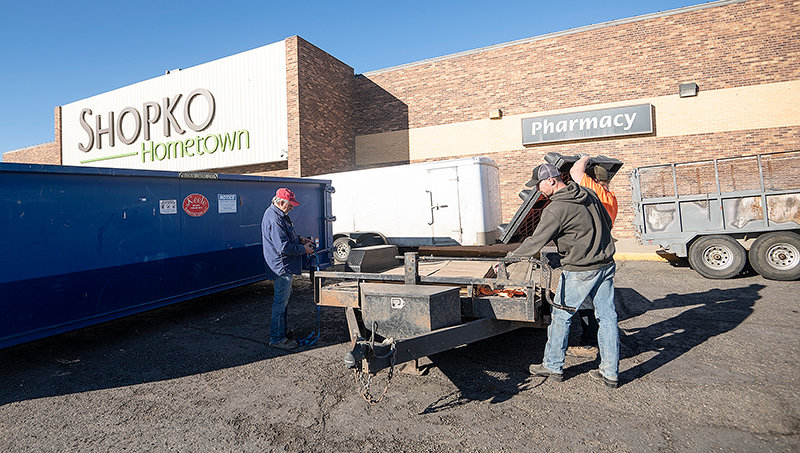 From left, Tom Hammons, Ryley Bosch and Brad Pearson of Ingraham Environmental Inc., unload supplies in front of the former Shopko building — now owned by Albertsons LLC — on Wednesday afternoon. The company is renovating the building for the future grocery store.
Tribune photo by Carla Wensky
Posted Thursday, January 27, 2022 8:25 am
By Kevin Killough

Albertsons has begun work to convert the former Shopko building into a grocery store.

A contractor working on the property, located at 1005 Coulter Ave., recently applied for two building permits with the City of Powell. MJT Construction, Inc. of Eagle, Idaho, filed an application for a $3.2 million remodel in November and submitted an application for $107,200 worth of interior demolition work in early December.

The city permits do not provide any timeline information, and calls to Albertsons’ corporate office in Boise were not returned by press time Wednesday.

Albertsons has said that its grocery store will include a liquor department, a pharmacy and a Starbucks coffee shop. According to social media posts made by a design firm working on the project, Powell’s new store will be a Safeway, but Albertsons has not made an official announcement.

The roughly 29,000 square foot building on Powell’s west side was formerly a Shopko store, but the chain went bankrupt and closed in June 2019. Albertsons purchased the facility in January 2020 from a private investment firm that bought up 78 Shopko properties amid the bankruptcy.

Plans for the new grocery store came to light in January 2021 when Albertsons applied for what was the city’s only available retail liquor license. The Pit Stop #12 gas station and convenience store, located at 241 W. Coulter Ave. and owned by Bailey Enterprises, Inc., sought the same license.

Citing Albertsons’ potential for a greater number of jobs, the Powell City Council awarded the license to the grocery store chain on a 5-2 vote. At the time, a representative from Albertsons said the store would be open in roughly a year, but in October, the council learned that the plans had been delayed due to increasing costs and material shortages.

Bailey Enterprises later acquired a license that became available when the Red Stag bar closed down, but its plans to add a liquor department, drive-up window and food service have also been delayed. Owner Mike Bailey told the council last fall that he expected to begin  construction in the spring.