It took five weeks to complete a major overhaul of the HVAC system, but the Powell Aquatic Center reopened this week. 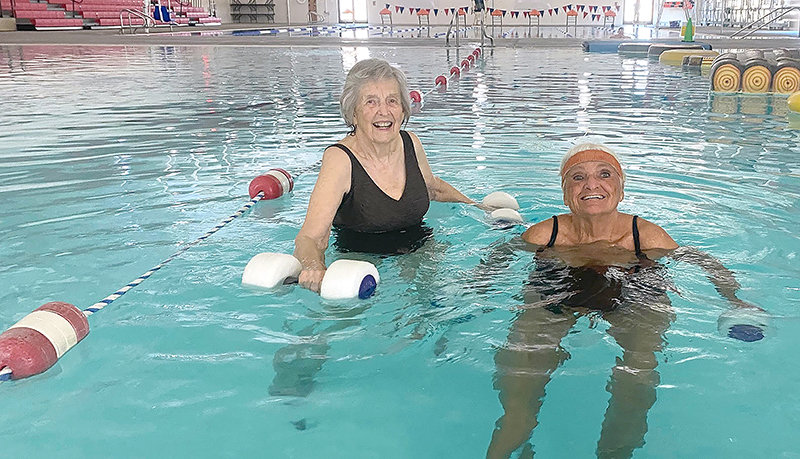 Powell Aquatic Center patrons Bobbi McCumber, left, and Sandy McGee enjoy a dip in the pool Tuesday. The center’s annual maintenance closure was extended this year to allow time to do extensive renovations to the HVAC system. Now complete, the air temperature is warmer, the pressure is equalized, and the humidity is way down.
Photo courtesy Tanya Bonner
Posted Thursday, May 12, 2022 8:20 am
By Kevin Killough

It took five weeks to complete a major overhaul of the HVAC system, but the Powell Aquatic Center reopened this week.

The pool reopened at 5:30 a.m. on May 9, and its patrons were “very excited and gleeful,” said Tanya Bonner, aquatic facility supervisor.

For a few weeks every year, the center closes for maintenance, but this year’s closure was extended to allow for the extra repairs.

Among other maintenance, two aging HVAC units were removed and replaced with new ones. The old units created so much negative pressure inside the building that some doors were difficult to open — or opened on their own. It was also very humid, as the dehumidifiers weren’t very effective.

Now with the new system, the pressure is balanced, and the temperature inside is much more comfortable.

Sandy McGee said she put off her trip to California and bought a six-month membership just so she could enjoy the pool. She was having trouble walking, but said using the pool has really helped. She said the center is now better than before.

Bobbi McCumber said her daughter got her into using the facility, and McCumber loves it so much she couldn’t wait for the center to reopen.

“If it had been closed another week I may have been committed to an asylum,” McCumber said.

She said there’s a noticeable difference with the new HVAC system.

“There is no comparison. The temperature is wonderful,” McCumber said.

Jennifer Chanley, who is a physical therapist at Gottsche Rehabilitation, also praised the new HVAC system.

“Love the fact that the doors don’t fly open. The pressure is much better,” Chanley said.

In addition to the HVAC replacement, the city also replaced the carpet in the room where they hold birthday parties. Crews replaced the broken starts on the lily pads, and a new drinking fountain was installed. A foot valve for the leisure pool circulation pump was replaced, and the surge tanks and grease traps were cleaned and cleared. A butterfly valve for a recirculation pump was replaced, as were nozzles in the jetted area and lazy river.

And as they do every year, Bonner said, center staff cleaned “every nook and cranny from concessions, locker rooms, pump room, storage rooms and the entire deck.”

In August, the Powell City Council awarded a $875,875 contract to Cody-based Rawhide Mechanical Inc. for replacement of the HVAC system, which included replacing the rooftop dehumidifiers and duct work. The city had budgeted $800,000 for the project and passed a budget amendment after Rawhide’s bid, which was the lowest of three, came in over budget.