Hot bats and a final inning victory helped spur the Pioneers to a doubleheader sweep over the Miles City Outlaws on Saturday, 15-9 and 16-15 on Powell’s home field. 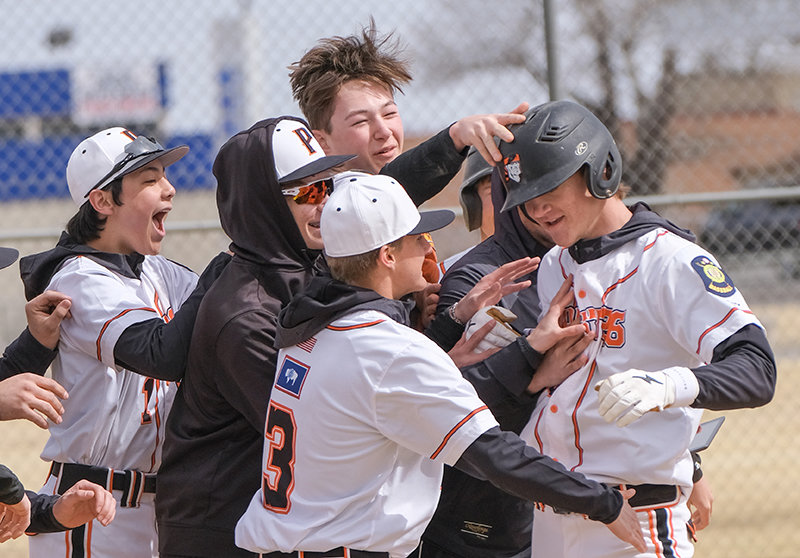 The Pioneer dugout swarms Trey Stenerson as he crosses home plate after hitting Powell’s lone home run on Saturday. Stenerson was hit by a pitch in the second game to drive in the winning run, as the Pioneers started the season 2-0 in dramatic fashion.
Tribune photo by Seth Romsa 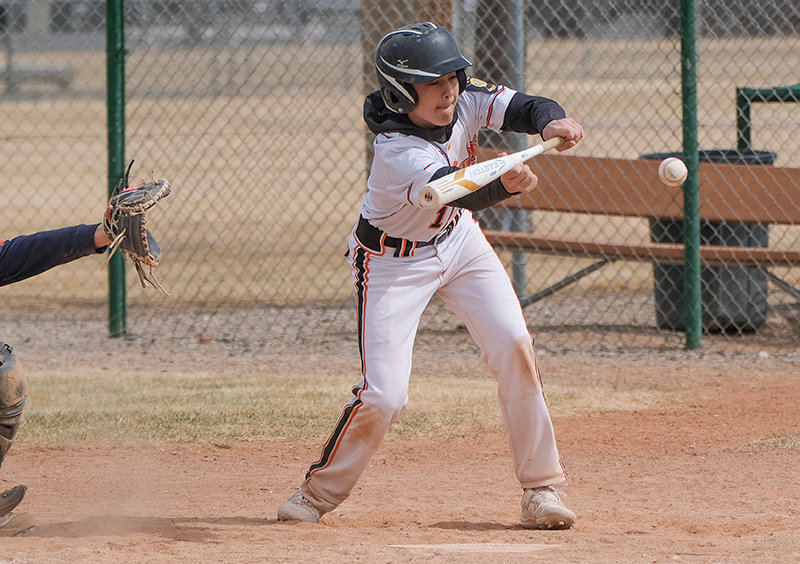 Ethan Welch tries for a bunt Saturday against Miles City at Ed Lynn Memorial Field. The Pioneers’ bats got to work, scoring 31 runs over two games. Powell heads to Miles City this weekend for a rematch.
Tribune photo by Seth Romsa
Previous Next
Posted Thursday, April 14, 2022 8:20 am
By Seth Romsa

Hot bats and a final inning victory helped spur the Pioneers to a doubleheader sweep over the Miles City Outlaws on Saturday, 15-9 and 16-15 on Powell’s home field.

“I thought we played well. That [Miles City] is a really good team,” Pioneers manager Jason Borders said. “Early in the year the bats are usually behind and we have not done a lot of outdoor work yet. We got a little batting this week and I think that made a difference.”

As the first pitch of the season flew in blustery, overcast conditions, the Pioneers turned to Cade Queen on the mound.

Queen struck out the first batter, but the Outlaws put runs on the board, after an error allowed two to score.

Powell responded in the bottom half of the inning, taking a 3-2 lead. Brock Johnson hit a two-run RBI single to right field and later scored when Aidan Wantulok grounded out.

The Pioneers extended their lead in the third, as Johnson had a two-RBI triple and Stenerson had an RBI single to make it 11-4.

Aiden Greenwald relieved Queen in the fourth and neither team scored in the inning.

In the top half of the fifth, an error led to a bases-clearing double and an RBI single shrunk the Powell lead to 11-8.

The Pioneers extended their lead back out after an RBI single from Johnson. Johnson later stole home and Stenerson hit a solo home run to center field to make it 14-8.

Cordes batted in one more run in the bottom of the sixth as the Pioneers held on for a game one victory.

Johnson finished 4-4 with five RBIs to lead the Pioneers past the Outlaws. Queen picked up the win by pitching three innings with zero earned runs and four strikeouts.

Following a short turnaround, Johnson found his way to the pitching mound, as the Pioneers tried to complete the sweep while battling the elements.

The Outlaws found a run in the top half of the first inning to lead 1-0.

In the second, a Greenwald single led to two runs and Cordes brought in Greenwald to give the Pioneers a 3-1 advantage.

However, a three-run homer in the third gave Miles City the lead back, as the two teams began a back-and-forth battle.

Powell responded with three runs in the bottom half to take a 6-4 lead.

The balls continued to fly off the bat, as Miles City scored three more runs in the top of the fourth and the Pioneers responded with three of their own to maintain their two-run lead.

“We gotta work on throwing strikes,” Borders said. “We get behind in the count and they can take advantage. We have to throw strikes, and we will; it is early, cold and windy.”

A strong fifth inning saw Miles City score five runs, and go up 12-9, but Powell cut it to 12-11 going into the sixth.

The Outlaws pushed the lead out to 14-11 in the sixth, but a three-run bottom half for the Pioneers knotted things up at 14 heading into the final inning.

Miles City scored to take the lead, setting up a few final at-bats for the Pioneers to find an answer.

Two walks and a hit batter loaded the bases with no outs, giving Powell a chance to win. However, two straight outs put Johnson in a clutch situation. He was hit by a pitch, bringing in the tying run, then Stenerson stepped up and was hit by a pitch as well. The inning’s third HBP brought in Nathan Feller to give the Pioneers the 16-15 win and move them to 2-0.

Cordes finished 3-4, Greenwald 2-3 and Johnson 2-4, with each player driving in three runs. Johnson finished with six strikeouts in his three innings pitched.

Stenerson got the victory on the mound after finishing the final two innings and giving up two hits and two earned runs.

“The first game was definitely better than the second game,” Borders said. “We did not throw it as well as we did in the first game.”

EDIT: Due to weather conditions, the Pioneer varsity baseball games in Miles City on Saturday have been canceled. The Pioneer C team games on Sunday have also been canceled due to a scheduling conflict. Manager Jason Borders said they are planning to reschedule the C games with the Billings Expos.

The Pioneer B team is at home on Saturday, as they open conference play against Lovell at 1 p.m. and 3 p.m.  All home games will be played at the Legion Baseball Complex.