Powell volleyball picked up its first loss of the 2020 season on Thursday, falling in three sets to cross-county rival Cody. 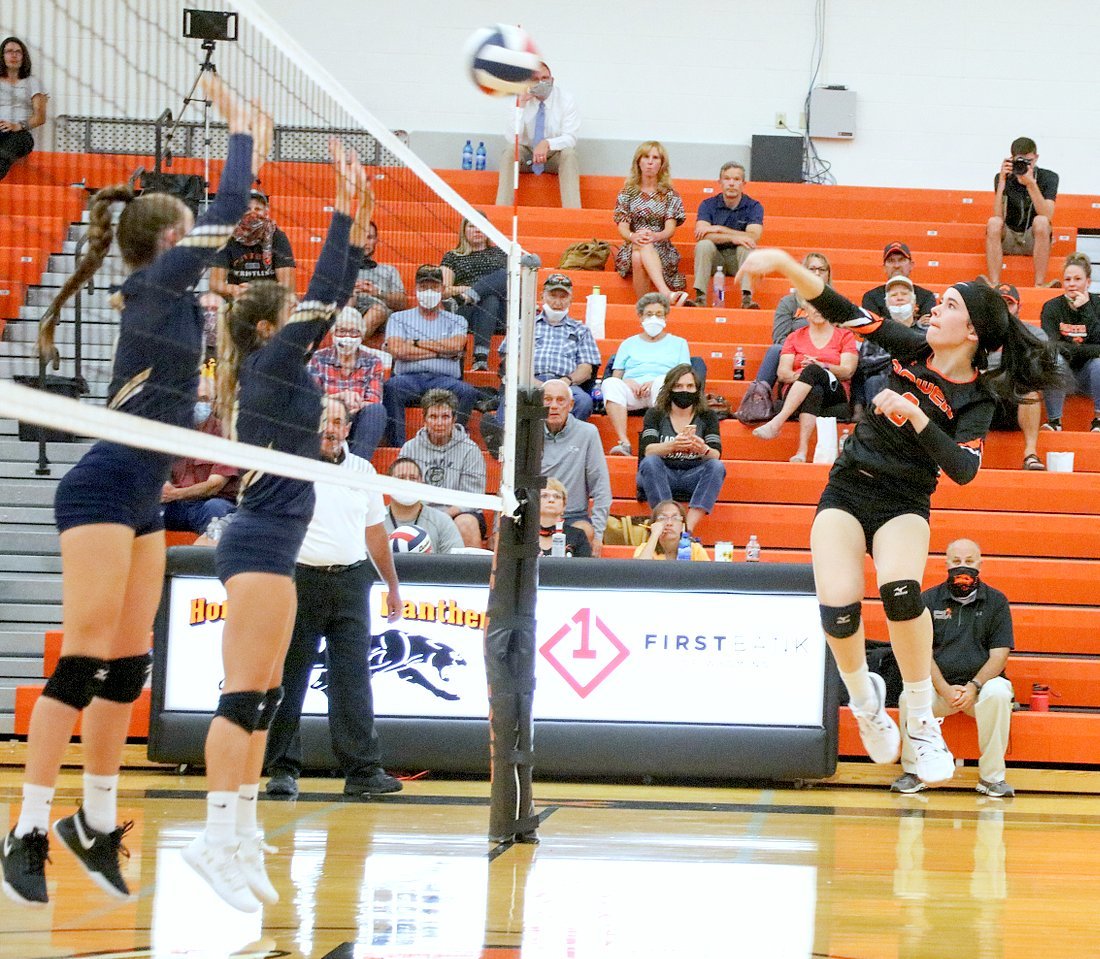 Mattie Larsen sends the ball over the net and two Cody blockers during the Panthers’ Thursday evening home loss to the Fillies. The Powell High School girls traveled to Buffalo on Saturday for a pair of matches.
Tribune photo by Greg Wise
Posted Saturday, September 5, 2020 11:28 am
By Carson Field

Powell volleyball picked up its first loss of the 2020 season on Thursday, falling in three sets to cross-county rival Cody.

The Fillies broke out an early lead in the first set and never looked back, winning that set 25-15. As the match progressed, the Panthers were more competitive but unable to win any sets. They dropped the final two 25-16 and 25-21.

Thursday’s match was the Powell High School team’s first competition in the Panther Gym of the 2020 campaign, and that may have played an impact on the result, said head coach Tasha Miller.

“Last night was our first home game and that always brings a lot of jitters, even more so when it’s against our county rival,” Miller said Friday. “We started out a little shaky and started to pull it together by the third game, but it was too late.”

In Powell’s first contest — a three-set win over Riverton — Miller cited the team’s chemistry as something that stood out. Even though the Panthers couldn’t replicate the same success, Miller said Powell’s teamwork was on display in Thursday’s loss.

“I feel like our team cohesion is still good,” Miller said. “We learned a lot from that match and will be working hard on our serve receive and our defense.”

Though Cody is just a half an hour from Class 3A Powell, Thursday’s contest wasn’t a conference match, as the Fillies compete in 4A.

“It’s always good to play against the 4A teams,” Miller said. “They help us see our weaknesses so then we can really focus on them and the next time we meet up, those weaknesses can hopefully be our strengths.”

A 3-0 loss is never easy, especially against a rival school like Cody. But Miller is confident in her team’s ability to bounce back from the defeat.

“It’s hard to keep them positive after a loss, but they know they can play better than that,” Miller said. “They are a talented group of girls, and it’s just the beginning. We are excited to see where the season takes us.”

The Panthers headed to Buffalo on Saturday for matches with the hosting Bison at 3 p.m. and Wheatland at 5 p.m. Results will follow in Thursday’s edition.