The Panther volleyball team jumped out to a quick lead against the rival Cody Broncs on Thursday, leading the entire first set and winning it 25-17.

Despite the fast start, however, the Powell … 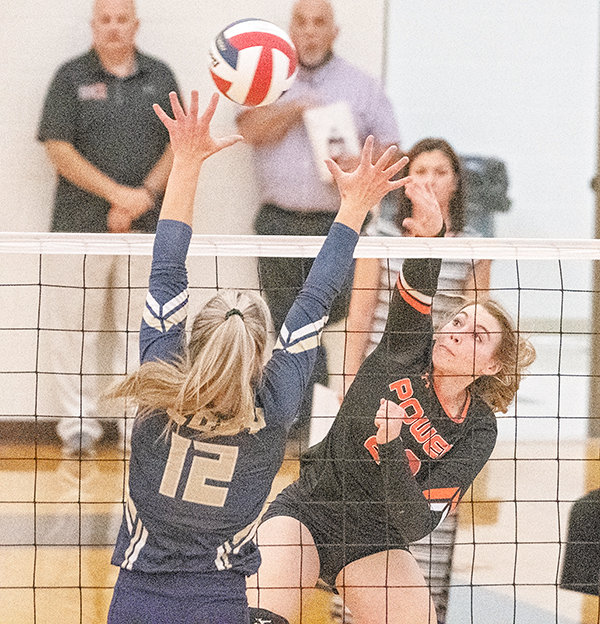 Powell High School junior Maddie Campbell goes up for a spike in a Thursday home match against the Cody Broncs. The Panthers ultimately fell 3-1.
Tribune photo by Carla Wensky
Posted Tuesday, September 28, 2021 8:00 am
By Seth Romsa

The Panther volleyball team jumped out to a quick lead against the rival Cody Broncs on Thursday, leading the entire first set and winning it 25-17.

Despite the fast start, however, the Powell High School squad lost the next three sets 25-20 for an overall 3-1 loss to the Broncs.

“Stepping out on the court ready to play is something we have been striving for,” said PHS head coach Lesli Spencer. “We managed to do it and played much better.”

In the second set, the Panthers (8-12) continued their hard play, as they battled point for point early on.

The Panthers continued to trail by no more than six points, with the set ultimately ending 25-20 in favor of the Broncs.

The Panthers again started strong in the third set, reaching their assignments early and flying around to hold a 9-5 advantage.

“We practiced on fundamentals and discipline in practice this week,” Spencer said. “[We] tried to break it down so we could build it back up.”

Despite the early lead, the Broncs came back on a 9-2 run to lead the game 14-11 and forcing a timeout from Spencer.

The Panthers battled back out of the timeout, trailing only 17-16 before the Broncs used a small 5-1 run to make the score 22-17 and forcing another timeout for the Panthers.

With the score at 22-17, the Panthers scored three straight points, causing the Broncs to use a timeout of their own at 22-20.

With the Panthers trying to come back and win the set, the Broncs scored three points out of their timeout to finish the third set at 25-20.

The Panthers came out with momentum early in the fourth set, leading 9-5 early on off of strong hitting and communication.

Not to be outdone, the Broncs again came back off of a small run coupled with a controversial decision on the backline regarding a ball potentially being out to tie the score at 10-10 and forcing a Panther timeout.

The two teams battled back and forth for the next 15 points, again coupled with a controversial double hit call against the Panthers, but the Panthers led 18-17 seizing momentum heading into a Broncs timeout.

“I was pleased with how they played,” Spencer said. “We need to clean up a few little things and the outcome would have been in our favor.”

The Panthers took to the road on Saturday to face the Buffalo Bison (13-8-1) in an nonconference matchup.

Spencer said the Powell team came out tired and struggled to focus throughout the match.

The Bison dominated the first two sets as they won 25-13 and 25-8. The Panthers battled back in the third set, but ultimately came up short, 25-19.

Spencer said the biggest takeaway from the road loss was learning how to focus and getting back to the basics when you are not feeling your best.

The PHS team heads out of state for their next match, heading to Red Lodge today (Tuesday), and the team will look for its first conference win when it heads to Lovell on Thursday.

“I am hoping that we start getting some comfort with our rotation with a few adjustments depending on how the girls are feeling,” Spencer said.

She said the team plans to focus on being steady throughout the week so their play begins to become consistent.