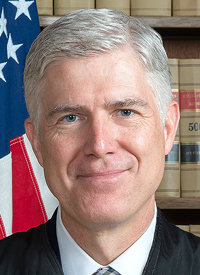 Gorsuch will discuss “Constitution Day Reflections: Equal Justice for All” in a fireside chat format with Wyoming Supreme Court Justice Lynne Boomgaarden. His talk will take place in the Buchanan Center for the Performing Arts concert hall.

There is no charge for the event, but tickets are required. They may be reserved at the Performing Arts box office or by calling 307-766-6666.

Tickets were available to the public for reservation or pickup beginning Monday, Aug. 30. All attendees must be 16 or older and show a photo ID to enter.

Gorsuch was set to speak on the UW campus last September, but his appearance was canceled because of COVID-19 concerns.

Gorsuch served on the Standing Committee on Rules for Practice and Procedure of the U.S. Judicial Conference, and as chairman of the Advisory Committee on Rules of Appellate Procedure. He taught at the University of Colorado Law School. President Donald Trump nominated him as an associate justice of the U.S. Supreme Court, and he took his seat April 10, 2017.

For more information about the Sept. 16 event, call Chavawn Kelley, UW College of Law program coordinator, at 307-766-6562 or email ckelley@uwyo.edu.