University of Wyoming photo of Pistol and Pete receives recognition

A photograph of the draft horse team of Pistol and Pete earned two gold awards from the Association for Communication Excellence (ACE).

The photograph was taken by Steve Miller during the Bronze …

University of Wyoming photo of Pistol and Pete receives recognition 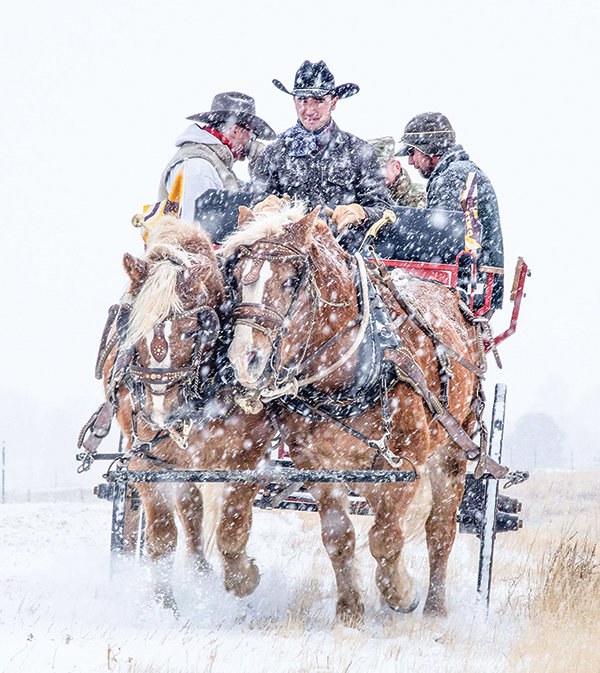 Clinton Sowards handles Pistol and Pete, the draft horse team of the College of Agriculture and Natural Resources, during the 2019 UW-Colorado State University Bronze Boot exchange on the state border. Handlers Travis Smith and Elias Hutchinson are in the wagon. The photograph earned two gold awards from the Association for Communication Excellence (ACE).
Photo courtesy Steve Miller
Posted Tuesday, July 14, 2020 8:05 am

A photograph of the draft horse team of Pistol and Pete earned two gold awards from the Association for Communication Excellence (ACE).

The photograph won golds in the service photo and social media single item categories. It was entered by the Office of Communications and Technology in the University of Wyoming Extension.

Among the office’s other entries, Reflections, the research magazine of the UW College of Agriculture and Natural Resources, received a silver award in the technical publications category. The Wyoming Agricultural Experiment Station magazine is produced by the Office of Communications and Technology and highlights research in each of the college’s departments and also spotlights a student’s research. Miller is the editor and Tanya Engel is the graphic artist.

A photograph by Engel for a Cowboy Branded Meats campaign earned a bronze in the association’s enhanced photo competition. The UW Meat Lab and UW meats judging team make and sell meat sticks and summer sausages as a fundraiser and as a way for students to gain experience.

ACE is an international association of communicators, educators and information technologists who focus on communicating research-based information.