The drivers of a sedan and a UPS truck each suffered serious injuries after their vehicles collided head-on in a Monday night crash on Wyo. Highway 295.

Both drivers had to be transported to … 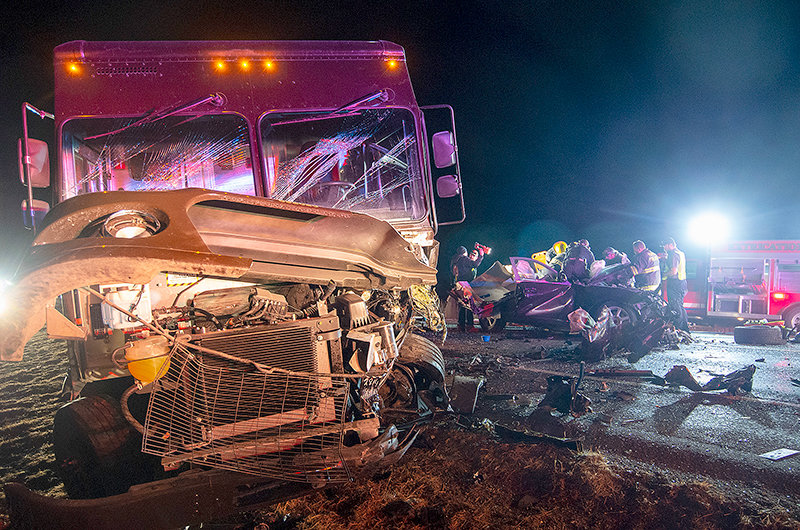 A UPS truck and a Cadillac collided Monday night on Wyo. Highway 295, after the Cadillac reportedly drifted into the wrong lane. The drivers of both vehicles suffered significant injuries.
Tribune photo by Mark Davis
Posted Thursday, March 17, 2022 8:10 am

The drivers of a sedan and a UPS truck each suffered serious injuries after their vehicles collided head-on in a Monday night crash on Wyo. Highway 295.

Both drivers had to be transported to Billings for medical treatment, with 31-year-old Mike Anderson of Shell then flown on to Salt Lake City due to the life-threatening nature of his injuries.

The crash occurred around 8:20 p.m. near Wyo. 295’s intersection with Road 5, located southeast of Powell in the Willwood area.

Anderson had been traveling east on the highway when his Cadillac sedan drifted left of center into the oncoming lane of traffic, said Wyoming Highway Patrol Trooper Randy Davis. The driver of the westbound UPS truck, Jacob Hamilton, “veered to the right, and slammed on his brakes and tried to avoid the crash,” the trooper said, “but that Cadillac was completely in the wrong lane at that point.”

Hamilton “did everything within his power to try and avoid the crash,” Davis said.

The collision wasn’t directly head-on, the trooper said, with the Cadillac spun around 180 degrees. It came to rest in the middle of the road and, according to a passerby, another eastbound truck came over a nearby ridge and glanced off the side of the sedan.

The driver of that truck — described as a flatbed dually — “never stopped,” Davis said. “It just kept going and we don’t know what vehicle it is, who was in it.”

When first responders reached the scene, they shut down traffic and assisted the two injured drivers.

Anderson was flown directly from the scene of the crash to Billings before later being transported to Salt Lake, Davis said, adding that such a significant collision could have proven fatal. Meanwhile, Hamilton was taken by ambulance to Powell Valley Hospital and then transferred to a facility in Billings.

Davis said it’s unknown what led Anderson’s Cadillac to cross into the oncoming lane of traffic, with the incident still under investigation.