An Indiana treasure seeker who had to be rescued by park rangers after illegally rappelling into the Grand Canyon of the Yellowstone last winter has received multiple penalties for his actions. David … 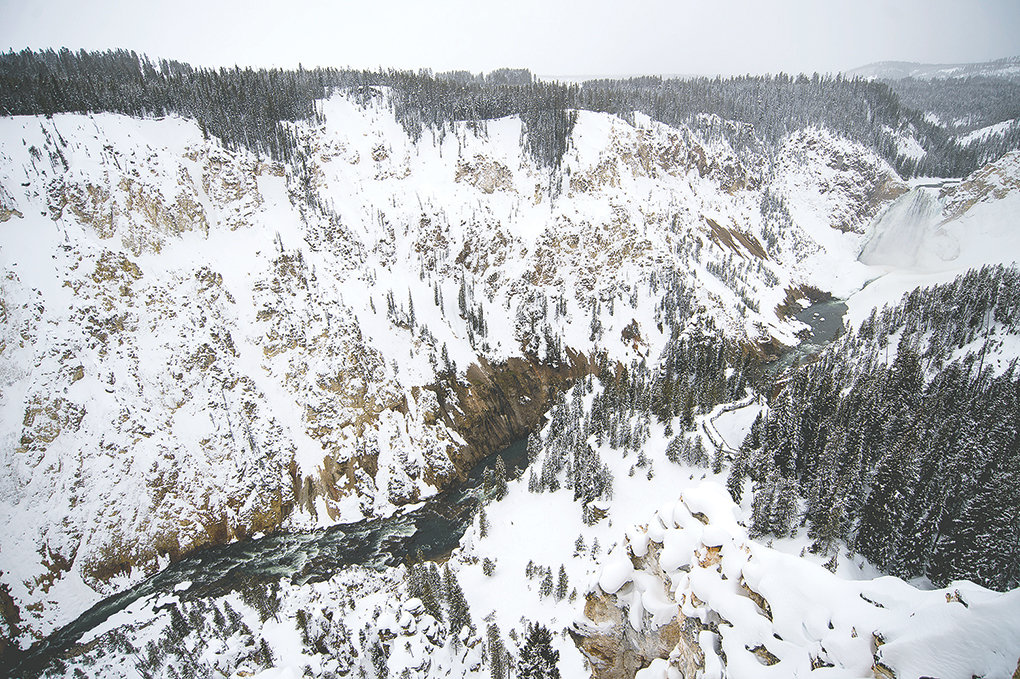 An Indiana resident descended some 800 feet into the Grand Canyon of the Yellowstone — pictured here in late December — and had to be rescued last winter. He has been ordered to serve jail time and pay thousands of dollars in restitution for the incident.
Tribune photo by Mark Davis
Posted Tuesday, May 26, 2020 8:25 am
By CJ Baker and Mark Davis

An Indiana treasure seeker who had to be rescued by park rangers after illegally rappelling into the Grand Canyon of the Yellowstone last winter has received multiple penalties for his actions. David Christensen must serve a week in jail, reimburse the Park Service more than $4,000 for the expense of getting him out of the canyon and stay out of Yellowstone National Park for the next five years.

Christensen told the judge who presided over his case that he has no plans of ever returning to Yellowstone and apologized for what he did. However, the 55-year-old Winamac, Indiana, resident also continues to firmly believe that Forrest Fenn’s famed treasure is stashed on the canyon floor.

“You might call me a lunatic, whatever, but I feel wholeheartedly I solved that Fenn treasure thing,” Christensen told U.S. Magistrate Judge Mark Carman at a March 16 teleconference, adding that, “I still feel it’s down there, your honor.”

Before sentencing Christensen on a pair of misdemeanor charges, the judge expressed serious doubts about Christensen’s claim.

“We’ve had a number of cases rising out of the Forrest Fenn treasure — people who have said they know exactly where it is,” said Carman, who presides at the federal courthouse in Mammoth Hot Springs, “but they’ve all been looking in different locations.”

Fenn published a riddle in 2010 that, he says, lays out the location of gold and jewels he stashed somewhere in the Rocky Mountain region. The New Mexico art dealer has said that you don’t need to “climb up or down a steep precipice” to retrieve the treasure and that he hid it while in his late 70s.

“... it would have been extremely difficult if not impossible for him [Fenn] to hide the treasure in this location considering his age and health,” Carman offered to Christensen at the hearing. “But that’s really of no concern to me.”

The judge said his major concern was that Christensen’s decision to rappel 800 feet down into the canyon put both himself and the responding rangers in a very dangerous situation.

“You really apparently were not equipped to make this trip, either in equipment or in experience, and it was ... [what] I would consider highly reckless behavior on your part,” Carman said.

After coming up with his “solve” to Fenn’s riddle, Christensen scouted out the canyon on a snowmobile trip in late December, then returned with supplies on Jan. 6.

However, federal officials say he had little climbing experience. He tied his rope to a railing at a Grand Canyon of the Yellowstone overlook — doing so in an unsafe manner, according to federal prosecutors — and ran out of rope before reaching the bottom of the canyon.

Christensen then had to “scoot” down to the river and was unable to get back to his rope, requiring a rescue by 11 National Park Service personnel, said Assistant U.S. Attorney Devon Beeny. She said the operation was “incredibly dangerous.”

One ranger had to descend into the canyon to retrieve Christensen. On their way up, Christensen said multiple times that “he didn’t think he could go on and requested a helicopter” to evacuate him, Beeny said. However, no helicopter was available amid the snowy winter conditions.

“If he [Christensen] had thought this through, behaved less recklessly, he may have known all of this, but instead he placed his own life and the lives of his rescuers in danger with his descent,” Beeny said.

In an interview this month, Christensen said his request for a helicopter was taken out of context.

“We started climbing up the hill and I said, ‘Jesus, this is arduous.’ Even the guy that came down for me said it was kind of cumbersome,” he said. “Then I said it would have been a better thing to send a [expletive] helicopter. And that’s all I said in passing, and now all of a sudden they throw that in there — that I needed a helicopter. That’s one of the things I couldn’t defend myself about.”

As part of a plea deal, Christensen pleaded guilty to misdemeanor counts of creating a hazardous condition and off-trail travel in the canyon, while prosecutors dropped another misdemeanor count of violating the conditions of his snowmobiling permit.

The U.S. Attorney’s Office argued for a sentence of seven to 10 days in jail while Christensen asked for no jail time.

The seriousness of the situation

In her remarks, Beeny noted that Christensen first told the rangers that “he just did this for fun and didn’t have an intended reason and wasn’t looking for anything in the bottom of the canyon.”

Christensen explained that he initially hid his treasure seeking because “you had 11 rangers ... and I didn’t want to entice one of them to actually go down and look for that thing.”

Christsensen has consistently said he isn’t interested in the riches, but rather to be proven right and to stop folks from dying in search of the treasure.

“I just wanted to solve it,” he said. “I wanted to take a picture and then bring it back up and tell the rangers about it — heck, give it to the rangers.”

Just days after Christensen’s sentencing, a fifth person died while hunting for Fenn’s gold — a Colorado man who succumbed to exposure after searching along the Utah/Colorado border near Dinosaur National Monument. It was later learned that the 53-year-old and an unnamed partner had previously been rescued from the Wild Mountain area just a couple weeks earlier.

Christensen noted that he divulged all of his plans to park officials after the incident — including in an email to Superintendent Cam Sholly — and said he repeatedly apologized to and thanked those involved in his rescue.

However, Beeny questioned how seriously Christensen had taken the situation. She pointed to comments he made to the Tribune, in which he claimed he could have eventually gotten out of the canyon on his own and that, “If they ban me [from Yellowstone] for five years, I’ll just have to wait to find the treasure.”

“We fear that if Mr. Christensen were to come back, we may have to rescue him again,” Beeny said.

However, Christensen noted that he later told the Tribune he would not return to the park.

“I had the one chance and I couldn’t get down there because it was stopped or curtailed early and I lost my chance,” he told the judge.

Christensen’s attorney, Rebecca Swandal of Livingston, Montana, noted that her client is a U.S. military veteran and had been a law-abiding citizen in the decades leading up to January’s incident. Swandal said he hadn’t intended to put anyone in danger and recognized the seriousness of the situation.

“I’m sorry for what happened,” Christensen told the judge. “I know there’s ramifications for this and I just ask for you [to be] as lenient as you can be ...”

Christensen is self-employed, making magnetic head assemblies for the food industry, and helps care for his wife, who has a medical condition.

“I’m a good man; I always have been,” he said. “I was just trying to help out with a situation and that’s all, your honor.”

Carman ultimately decided to impose seven days in jail, five years of unsupervised probation (which includes being banned from Yellowstone), $40 in court costs and $4,088.75 in restitution. The restitution — which must be paid by the end of the year — will go toward paying for the man hours of the personnel who were involved in the rescue, said Linda Veress, a spokeswoman for the park. As for when the Park Service seeks restitution for a rescue, that “will depend on the circumstances of the case,” Veress said.

Christensen will be allowed to schedule the jail time at a facility in Indiana sometime between now and Dec. 31. That flexibility was intended to not only accommodate Christensen’s work schedule, but also the COVID-19 pandemic.

Christensen offered to return to Mammoth Hot Springs to serve his sentence, but “we won’t require that,” the judge said.

Following his sentencing, Christensen himself became infected with the new coronavirus and he’s been slowly recovering, he said in a May 17 interview.

“It’s been one heck of a challenge,” Christensen said.

Amid his recovery, he’s continued to follow every clue from Fenn and he remains confident he’s correct about the location of the treasure.

“There is nothing that [Fenn] has said that has put a doubt in my mind that it’s not anywhere besides the Grand Canyon of Yellowstone,” Christensen said.

The Indiana veteran said he’s been ridiculed by many and has been “left stranded by Fenn” after conversing with him on the phone, but “I’m still emphatic about this thing.”

“I wrote to Vice President [Mike] Pence,” he said, “but I never got a reply.”