Fall to Laramie county, Casper in regular season wrap up

The Trappers wrapped up the …

Fall to Laramie county, Casper in regular season wrap up 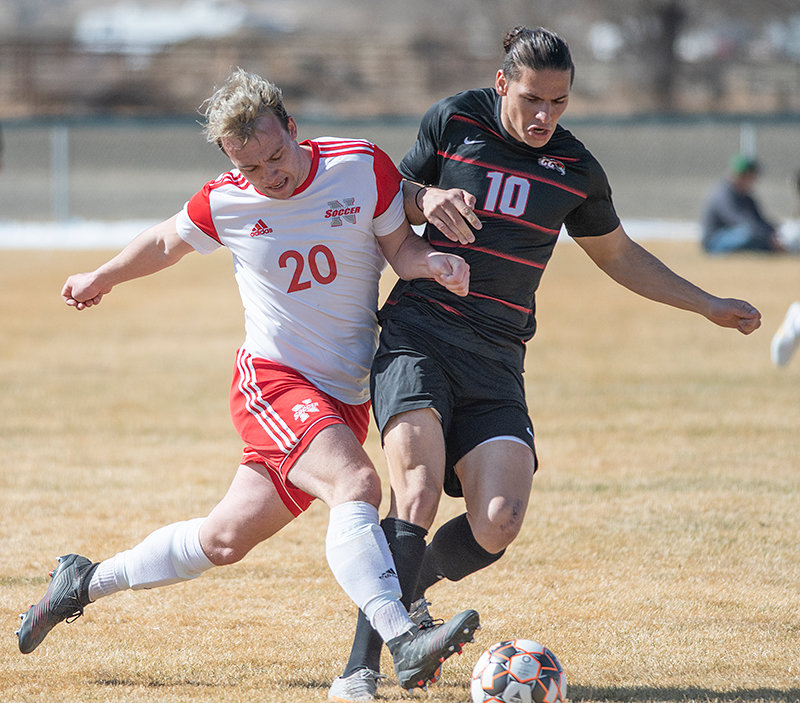 Thomas Mullen scrambles for a ball with Casper’s Kevin Tauzia in Northwest College’s first meeting with Casper. NWC will not host a Region IX Tournament game after falling 1-0 to LCCC.
Tribune photo by Carson Field 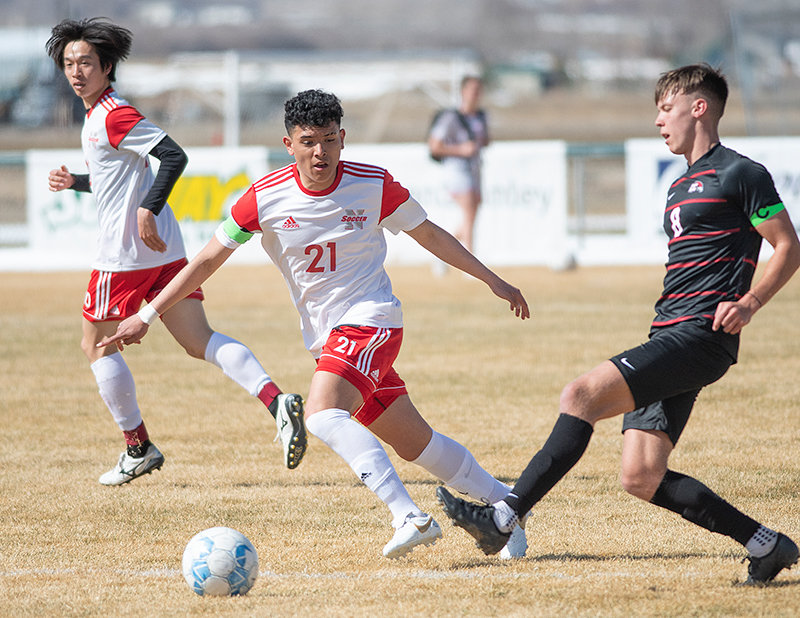 Orlin Castro Hernandez defends a pass in Northwest College’s April 7 game against Casper College. The Trappers put several quality shots on goal in their most recent games, despite losing both contests.
Tribune photo by Carson Field
Previous Next
Posted Thursday, May 13, 2021 8:20 am
By Carson Field

The Trappers wrapped up the 2021 regular season over the past week, playing matches against Laramie County and Casper College. NWC fell 1-0 to the Golden Eagles on May 5 and dropped a 2-1 contest to Casper Tuesday.

Head coach Rob Hill described the effort against LCCC as “organized.” The Trappers logged 16 shots on goal in the loss, but none of them found the back of the net.

“I felt like we should’ve scored on at least a couple of the chances we had,” Hill said. “We were a little bit hesitant and didn’t play with enough conviction.”

The match’s only goal came in the final 10 minutes when LCCC’s Jonathan Jimenez-Flores cashed in on a one-on-one with NWC keeper Matias Sandoval. A goal kick that NWC didn’t cover well enough led to Jimenez-Flores’ open opportunity.

“To lose the way we lost was a bit disheartening,” Hill said.

The outcome of NWC’s final conference game meant the Trappers didn’t get to host a Region IX Tournament game in Powell.

“It meant so much,” Hill said. “We learned a lesson that you can’t be hesitant. Despite that, we played pretty decent.”

In the next match, a non-conference test against Casper, Hill played around with the lineup, shuttling several reserves into the match to keep some of his starters fresh for the postseason.

Once again, the Trappers saw several offensive opportunities, and they didn’t take advantage of them. Northwest’s only score came from Tumekie Blackwood, knotting the match at 1-1. But minutes later, Casper scored the go-ahead goal to seal a 2-1 win.

Because it was a non-conference match, it didn’t have an impact on the Trappers’ seeding in the Region IX Tournament, so Hill wasn’t devastated by the outcome.

“It was unfortunate that they got the second goal, but I’d rather us give up this game and be fresher for the first round of playoffs,” he said. “Our seed was already set, so there’s no impact.”

While NWC faltered in both contests, Hill said both were sound “team efforts.” In goal, he was particularly impressed with Sandoval, who has “hit really good form in the back end of the season.”

The Trappers, who finished 4-4 overall, will await the results of a couple more Region IX games to learn their destination for the first round of the Region IX Tournament. They will either play Otero Junior College or Laramie County.