One final weekend with multiple games per day saw the Trapper volleyball team post a 3-1 record over three days at the Wyo-Braska Tournament — losing to hosts Western Nebraska 3-0, but … 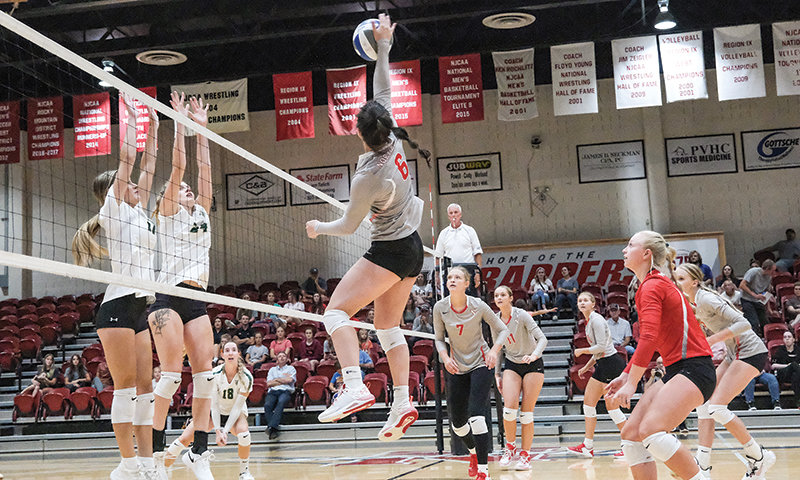 Brooke Palmer reaches high to try and get a ball during the Trappers match against the Rocky Mountain JV.
Tribune photo by Seth Romsa
Posted Thursday, September 22, 2022 8:15 am
By Seth Romsa

Hopping off the bus Thursday, Northwest (12-6) had little time to adjust to a difficult environment matching up against No. 7-ranked Western Nebraska (18-3) in Scottsbluff.
“Spending nine hours on a bus then having to hop off and play, that is tough,” coach Scott Keister said.

The Trappers started off slow against the hosts, posting a negative hitting percentage in the first set and dropping the opener 25-15.

In the second set, the Trappers showed improvement but posted an even hitting percentage, finishing with eight kills and eight errors, and fell behind 2-0 after a 25-13 loss.

Northwest played a stronger set to finish out the match, but was unable to overcome the Cougars, resulting in a sweep after a 25-19 third set loss.

“They are tough, they have a really good team,” Keister said.

Errors piled up for the Trappers throughout the match, with 21 hitting errors, 10 return errors and eight service errors resulting in more than half of the Cougars points.

After a difficult loss to Western Nebraska on Thursday, the Trappers hopped back over into Wyoming to take on Lake Region State College-North Dakota (11-8) in Torrington on Friday and used some new strategies to great effect.

Heading into the weekend, Keister said he is beginning to test a new formation for the Trappers. They are moving into a 6-2 set as the team becomes healthier, and the results have slowly started to show.

Northwest came out slow in the first set of the match, losing 25-16.

“They were a nice team, much different than what was shown on film,” Keister said. “They played with passion, played a 6-2 like us, and played hard with two very good setters and a good libero.”

That was followed by a close set between both teams, but Northwest was able to squeeze out a 25-23 set two victory.

For the last time this season the Trappers played two contests on the same day, finishing Friday off against Colorado Northwestern Community College (0-6).

The Trappers came out strong in the first set, hitting .312 as a team and cruising to a 25-9 victory.

A closer second set had the Trappers hitting .207, but they were able to pull away for a 25-16 victory.

Northwest completed the sweep in the third set, defeating the Spartans 25-20.

“They hired a coach late and do not have a lot of kids but I was impressed with their kids,” Keister said. “They played hard no matter what.”

Finishing out the weekend, Northwest encountered a tough matchup in Northeastern Junior College (10-9).

The Trappers started out the match strong, with 12 kills to five errors helping Northwest push past the Plainswomen 25-18.

A more difficult attacking second set had the match closer for Northeastern, but the Trappers were able to pull ahead for a 25-20 win.

Trying to put the match to bed in the third set, the Trappers put together their best attacking set of the day with 15 kills and only four errors to win 25-21.

“I think the stars aligned for us,” Keister said. “We had three matches under our belt with this lineup and it took us a while. If they played us either of the first two matches they probably would have beat us. It was a fun match to watch.”

Returning home this weekend the Trappers kick off the Region IX schedule with two important matchups.

Starting off the weekend, Northwest squares off against Eastern Wyoming (1-13) on Friday at 6 p.m.

Keister said despite their record, the Lancers will bring a tough team to Powell as they have a strong new coach and program and have remained close in matches throughout the season.

The Trappers then welcome Laramie County Community College (9-6) on Saturday at 2 p.m. to wrap up the weekend.

“LCCC hired a great coach,” Keister said. “Going forward I think that will be a program to beat. I like it when everybody in our region gets better it makes us all better.”

These will be Northwest’s only home games until Oct. 19.

Northwest heads back on the road Wednesday, to take on No. 11-ranked Central Wyoming (10-6) at 6 p.m. in Riverton.