Northwest College’s volleyball program had a successful spring, and just a few months later, the team will look to continue its upward trajectory.

The team has been in Cabre Gym practicing … 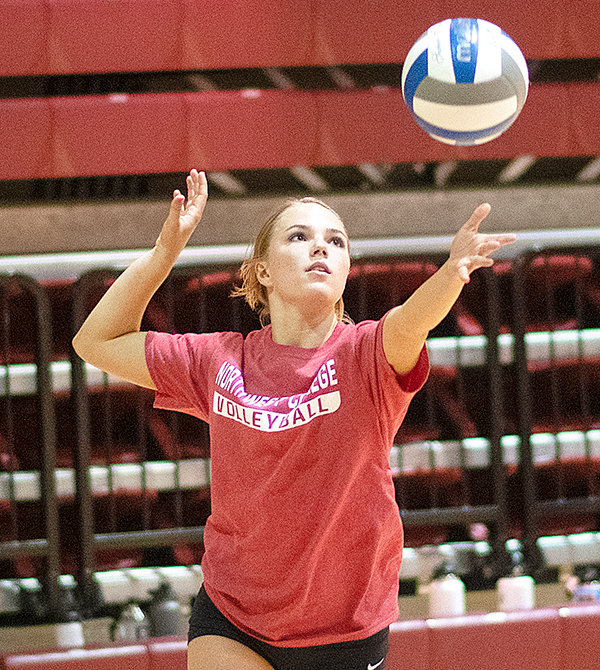 Northwest College’s volleyball program had a successful spring, and just a few months later, the team will look to continue its upward trajectory.

The team has been in Cabre Gym practicing for the last two weeks and began fall competition on Aug. 11, playing four scrimmages in Billings. This Friday marks the official start of NWC’s regular season, when the Trappers will play four matches at the Big Sky Challenge in Butte, Montana.

The Trappers are coming off a 13-12 campaign — which was pushed from the fall 2020 to the spring due to COVID-19 — in which they won eight more matches than the previous season.

Though NWC’s players have only been in the gym for a couple of weeks, Scott Keister has praised the fitness of his returners. He said the shortened offseason helped them return to campus in top shape.

“They were really in shape when we ended [last season], and they’ve come back in great shape,” Keister said. “A lot of them played outdoor tournaments, did their strength workouts and seemed disciplined. Kudos to them — they did the work.”

But it’s not just the returners who have impressed Keister early on. The coach applauded the entire group of newcomers — Elsa Clark, Emma Hanson, Avery Hobbs, Hailey Marshall, Brooke Palmer and Sidney Parker — saying they’ve been “killing it.”

Early on, Keister said the greatest improvements he’s seen have come in the middle and on defense, in general.

Specifically, Parker has stood out in the middle.

“The first time she hit a ball, our returning defensive players were kind of like, ‘We haven’t seen that in a while,’” Keister said. And defensively, Hobbs, a libero, has shown promise, “frustrating NWC’s hitters and forcing them to develop new shots,” per the coach.

Playing four two-set exhibitions against Rocky Mountain College and Dawson Community College last week, the Trappers went 5-3 in what Keister described as a “good day of volleyball.” Though NWC fell in both sets against RMC’s varsity squad, both were close and the Trappers competed all the way through.

In the other six sets on Wednesday, Aug. 11, NWC dominated, with the team’s chemistry on full display. Keister knows his team can compete with the best if the returners and newcomers gel consistently.

“The hope is they complement each other well,” the coach said. “So far, I’m pleased with what I’ve seen. Good things are happening out there.”