The early season gauntlet has proven to be a roller coaster for the Trapper men’s basketball team. The team recently played eight games in 12 days, finishing a road trip through Montana with a … 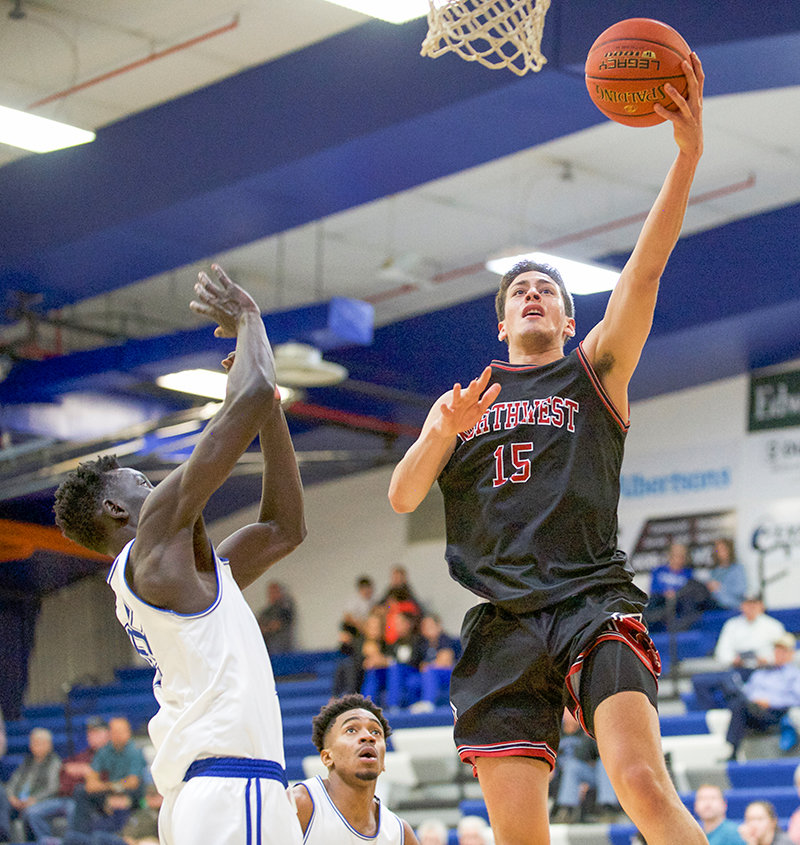 NWC freshman Bryson Stephens goes up for a reverse layup against Miles Community College on Nov. 18. Stevens finished with 15 points and helped the Trappers get a 98-89 victory over the Pioneers.
Tribune photo by Seth Romsa 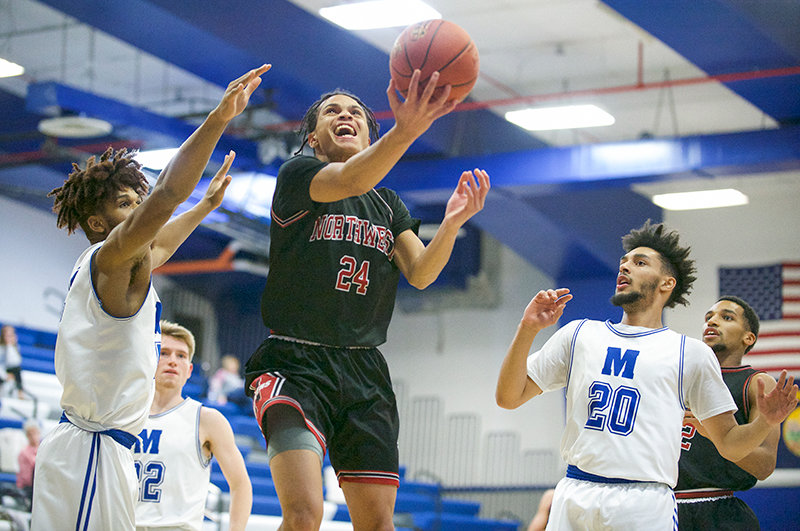 Freshman Juan Camargo attempts a fast break layup against Miles Community College. Camargo and the Trappers finished their road trip through Montana with a 2-1 record and moved to 5-3 overall on the season.
Tribune photo by Seth Romsa
Previous Next
Posted Friday, November 26, 2021 8:20 am
By Seth Romsa

The early season gauntlet has proven to be a roller coaster for the Trapper men’s basketball team. The team recently played eight games in 12 days, finishing a road trip through Montana with a loss to Dawson Community College and victories over Miles Community College and Rocky Mountain JV.

The Northwest College men — now sporting a 5-3 record in the early season — got a week of rest before taking off to Williston, North Dakota, this weekend.

Heading into their Nov. 17 matchup against Dawson (8-1), the Trappers were coming off a 90-83 victory over Rocky Mountain and looking to continue their momentum.

Unfortunately for Northwest, a perfect storm was brewing that would result in the team’s largest loss of the season.

The Trappers started out strong, taking a 9-2 lead early by hitting 3-pointers and sustaining early pressure from Dawson. Three minutes in, the NWC squad was up 13-7. But the Trappers then went ice cold from the field.

Over the next five minutes the Buccaneers ramped up the pressure, forcing constant turnovers by the Trappers which led to a 16-0 Dawson run. When a David Ayala dunk stopped the bleeding, it was 23-15 with 12 minutes remaining in the half.

The pressure did not stop there: Dawson continued to force turnovers, for a total of 15 in the first half.

When the Trappers were able to find a shot, they were not falling.

“We have not been able to practice against intense pressure like that with so many games in 12 days,” NWC head coach Jay Collins said.

The lead continued to grow for Dawson as they built a halftime lead of 52-24. The Buccaneers shot 63% from the floor and 53% from 3-point range, while the Trappers shot 30% from the field and 23% from three.

A second half comeback was not on the horizon for Northwest.

Much like the first half, the teams started out even, but the Buccaneers built their biggest lead of the game with eight minutes remaining at 81-41. The game remained relatively even from that point forward with the final score being 96-61 in favor of the Buccaneers.

Overall the Trappers finished with 25 turnovers while shooting 35% from the field, 20% from 3-point range and 53% at the line.

“It was kind of a perfect storm,” Collins said. “My biggest disappointment in that game was that we did not guard the way we are capable of defending.”

The Trappers were led in scoring by Andre Loigu off the bench with 12 points, followed by Gabe Gutierrez and Juan Camargo with 10 each. Ayala led the Trappers with eight rebounds and three assists.

Coming off their lowest scoring output of the season the night prior, the Trappers made the trip from Glendive, Montana, to take on the Miles City Pioneers (3-6) on Nov. 18.

The two teams battled back and forth until Trapper freshman Zane Langrehr came off the bench and made a living off of weak side rotations for open 3-point shots.

Langrehr led the Trappers in scoring with 17 points on 5-of-7 shooting from 3-point land.

“He is capable of doing that,” Collins said of the freshman from Bangor, Wisconsin. “That’s what we need him to do, is hit open shots.”

With the two teams tied at 25 with nine minutes left, neither team was able to gain a definitive advantage. The Trappers led by as many as eight points, but only held a 48-43 advantage at halftime.

In the second period, NWC maintained its lead with timely runs — such as six points from freshman Vladimir Vondra — which helped the Trappers suppress any sort of comeback from Miles.

After amassing 10 points and 10 rebounds for a double-double, sophomore Alan Swenson picked up his fourth foul midway through the second half. That forced Northwest to rely on its depth, which, thankfully for the Trappers, is one of their strengths this season.

“Alan [Swenson] had four with 10 minutes left but Andre [Loigu] was able to step in and give us some valuable minutes,” Collins said.

Miles pulled to within a point with 5:37 remaining at 81-80, but four straight points from Gabriel Gutierrez allowed the Trappers to get back up by five. They would go on to lead by no less than that amount the rest of the way en route to a 98-89 victory.

Joining Swenson and Langrehr with double figure scoring were Gutierrez, Bryson Stephens and Ayala with 15 points each and Juan Pablo Camargo with 10.

Swenson’s 10 rebounds led the Trappers, while Stephens had eight assists.

ON THE ROAD AGAIN

After the three-game road trip through Montana, the Trappers were able to enjoy a week at home and get in some practice before heading on the road.

“It is a more normal schedule now,” Collins said. “I said in the beginning that our biggest strength is our ability to practice. These guys have great integrity every day and they come out and want to get better.”

NWC is heading to Williston, North Dakota, this weekend for the Williston State Invitational. The Trappers will take on Turtle Mountain Community College today (Friday) at 2:30 p.m. and face Williston State College (2-5) at 3 p.m. Saturday before heading back to Powell.