Just a few months ago, so much seemed uncertain for Northwest College rodeo. The program was unsure it would have a fall season because of COVID-19.

Despite this previous uncertainty, the … 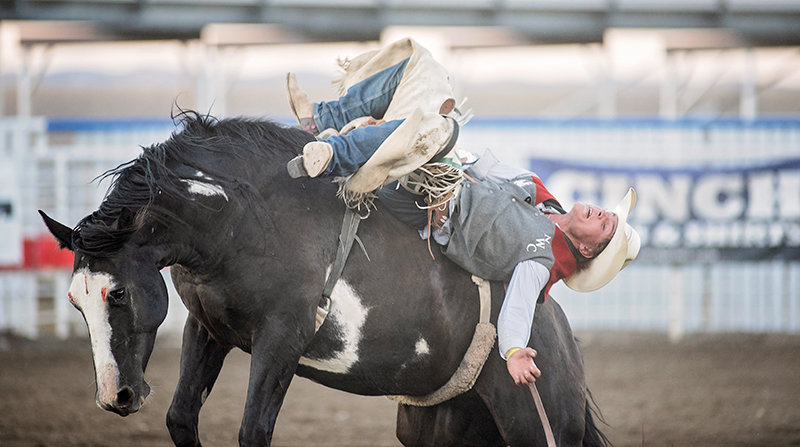 Bruin Bradshaw stays on board for the 8-second ride earlier this season at Stampede Park in Cody. Bradshaw scored 59 points on this ride. He is currently in second in the all-around standings.
Tribune photo by Carla Wensky 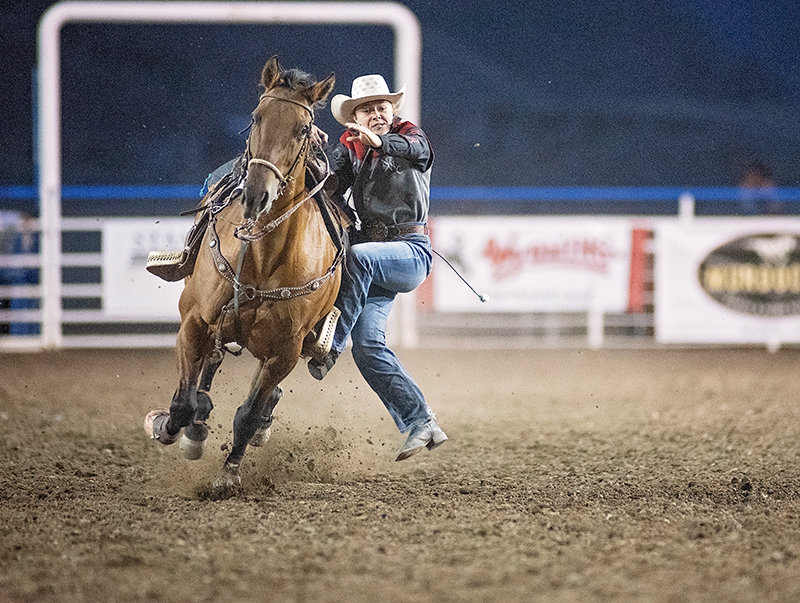 Hailey Davis steps off her horse at a dead run during goat tying earlier this season at Stampede Park in Cody. The Trappers’ focus in the off-season will be staying in shape until practice resumes in February.
Tribune photo by Carla Wensky
Previous Next
Posted Thursday, October 15, 2020 8:15 am
By Carson Field

Just a few months ago, so much seemed uncertain for Northwest College rodeo. The program was unsure it would have a fall season because of COVID-19.

Despite this previous uncertainty, the Trappers recently completed their 2020 fall campaign, and the results exceeded head coach Del Nose’s expectations.

“I’m pretty tickled about it,” Nose said. “We really got it set up where we can be competitive again in the spring.”

NWC competed in four different rodeos between Sept. 11 to Oct. 3, with the season kicking off at the Trapper Stampede Rodeo in Cody. The highlight of the season came in the team’s second event, when Northwest finished first place in the University of Montana-Western Rodeo in Dillon.

Most recently, the Trappers wrapped up the season in Havre at the MSU Northern Rodeo, where they finished third as a team in the men’s division.

With four rodeos now under the riders’ belts, they have experience before the spring season picks up and NWC attempts to make the College National Finals Rodeo.

“It’s huge,” Nose said. “We have a lot of freshmen who were coming out of high school, and it’s a whole new learning curve here. They’re coming around and have really picked up on it.”

After this strong fall showing, the Trappers sit in third place in the men’s team standings and fifth in the women’s standings.

Not only did the Trappers have the chance to compete amid a global pandemic, they also excelled while gaining these valuable reps. Nose is confident the four rodeos have prepped the team well as it prepares to compete for the CNFR.

“We’re kind of starting to build a foundation,” Nose said. “With a little TLC and hard work, we can definitely make it to the finals.”

NWC will resume practice in February with spring rodeos set to begin soon after. Before then, the focus is on the riders succeeding in the classroom while also staying physically fit.

“We gotta stay focused,” Nose said. “ They’ve gotta get to the gym and stay in shape, then we should be ready.”