After two strong performances in a row, the Trappers are back to their winning ways. Northwest College men’s soccer took down Central Wyoming (4-2) and Northeastern Junior College (1-0) last … 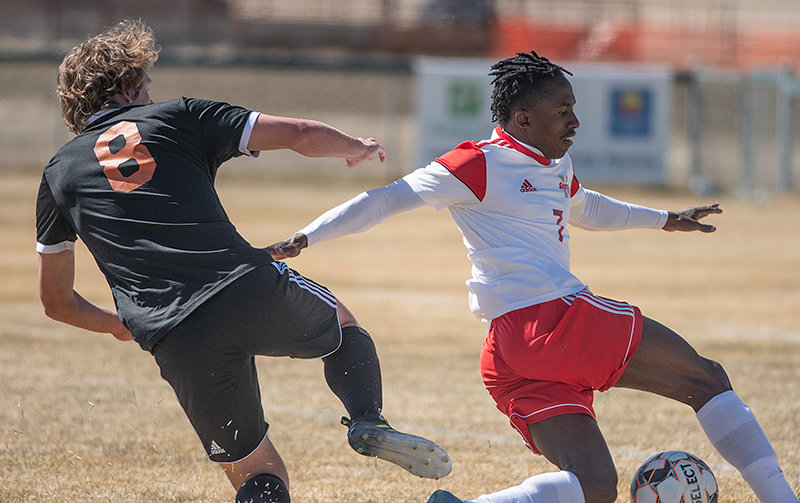 Tumekie Blackwood slides for a ball in NWC’s April 21 match against Central Wyoming College. Blackwood got the Trappers on the board early, scoring the opening goal in the third minute.
Tribune photo by Carson Field 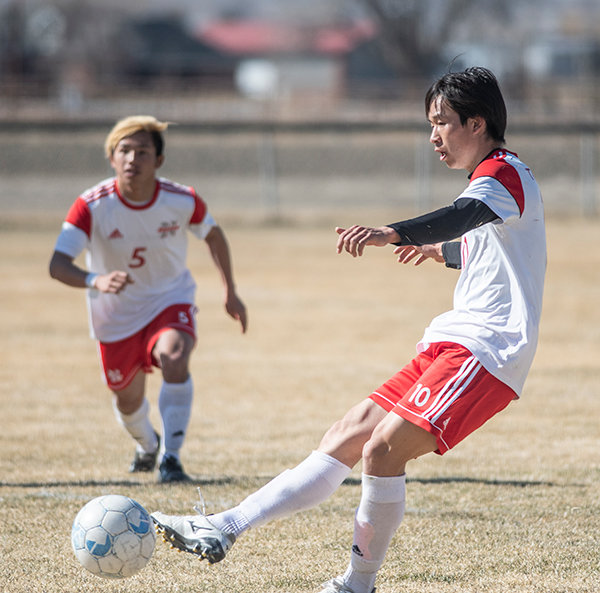 Haruki Yamazaki strikes a penalty kick for Northwest College’s third goal on April 21. The 4-2 win was the first of two Trapper victories, allowing them to eclipse .500 on the season.
Tribune photo by Carson Field
Previous Next
Posted Thursday, April 29, 2021 8:20 am
By Carson Field

After two strong performances in a row, the Trappers are back to their winning ways. Northwest College men’s soccer took down Central Wyoming (4-2) and Northeastern Junior College (1-0) last week, improving to 3-2 on the season.

Against the Rustlers on April 21, NWC got off to a quick start when Tumekie Blackwood scored in the third minute. Just 10 minutes later, Thomas Mullen found the back of the net, extending the lead to 2-0.

Haruki Yamazaki notched a goal on a penalty kick, once again giving his squad the lead in the 62nd minute. And a few minutes later, forward Vladimir Sennikov got on the score sheet, thanks to a mishandled play from CWC’s keeper.

But in the match’s late stages, CWC made it interesting. Rustlers Ryley Duckworth and Benjamin Nelson both scored, shrinking Northwest’s lead to 4-2.

NWC still escaped with the two-goal victory, but the squad wasn’t able to fulfill its goal of holding CWC scoreless.

“Our effort dropped off a bit in the second half,” head coach Rob Hill said. “We conceded two sloppy goals. I would’ve rather us not scored those last two goals and keep a clean sheet.”

A couple days later, the Trappers played a Saturday afternoon contest against NJC. Much of the game was a stalemate, with both teams playing exceptional defense.

With a few minutes left in the first half, NWC broke the scoreless spell. Yamazaki dribbled past a few defenders and netted a goal with his left foot, assisted by Taiga Tanabe, to give his squad a 1-0 advantage.

“It was a great shot and beautifully set up,” Hill said.

Northwest continued its defensive success from the first half to sustain its lead and earn its third win of the season.

The coach noted his midfield group — Yamazaki, Tanabe and Orlin Castro Hernandez — as players who stood out and a key factor to earning a win over a quality team.

“They were outstanding and NJC couldn’t handle them,” Hill said. “They were too clever, and we did a good job of containing them.”

The road contest against NJC required a 10-hour bus trip to Sterling, Colorado, for the Trappers, but that didn’t phase them. They were still able to prevail and play some of their best soccer of the season, not allowing a goal.

“To me, that’s the most important thing, keeping a clean sheet,” Hill said. “It was a very good win on the road.”

Now 3-2, the Trappers sit fourth in the NJCAA Region IX standings. They face off against Western Nebraska and Laramie County this weekend, playing matches on Friday and Saturday.

“These games are huge and a big factor on if we host at home or not,” Hill said. “It’s very, very hard to go on the road in a first-round playoff game and perform, so it’s very important that we come out and try to get these wins.”