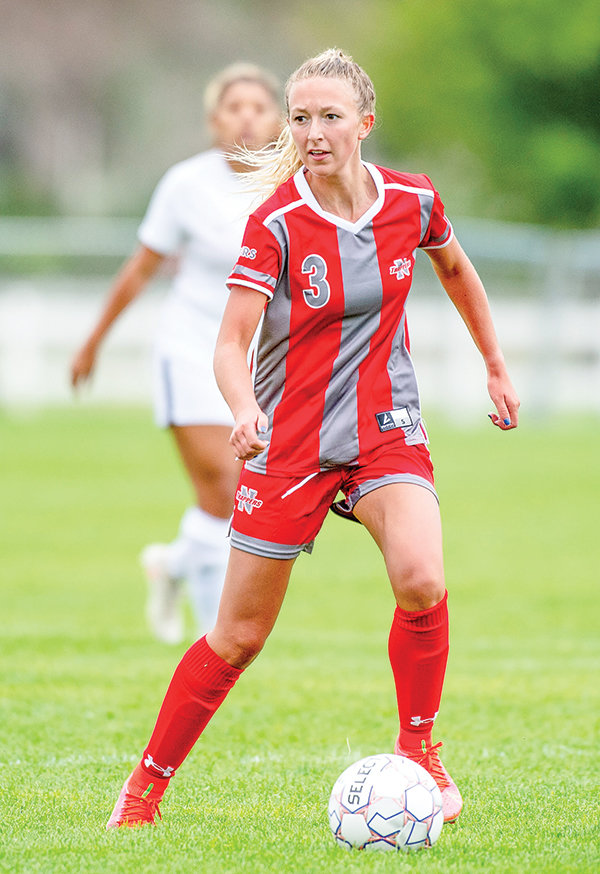 NWC freshman midfielder Kameron Stitt looks to advance the ball upfield during the team’s first scrimmage of the year. The Trappers will host games for the first time in weeks on Friday and Saturday.
Tribune file photo by Mark Davis
Posted Thursday, September 30, 2021 8:10 am
By Seth Romsa

The lone goal came from freshman Kameron Stitt in the 21st minute. Stitt again played an impactful role for the Trappers  (5-2-1 overall, 3-0-1 in Region IX) after she drew a penalty the previous weekend.

“We made life difficult for ourselves,” coach Rob Hill said.

The Trappers were able to apply pressure to the CWC defense, as they finished the game with 21 shots, with 10 of those shots being on goal. However, Hill felt the Trappers may have been fatigued from a lot of travel the previous weekend.

“Three games in five days, where two of those included more than 30 hours of travel did not help,” Hill said. “It was one of those games where passes that were working in the previous games did not work well.”

A majority of the shots against CWC (2-8, 0-4) came in the second half, when the Trappers totaled 13 shots.

The Trappers earned their third clean sheet in the last four matches, as sophomore goalie Alexa Williams continued her impressive season in net.

The Trappers return home for their first home game in nearly three weeks, as they will host No. 16-ranked Laramie County Community College (7-2-2 overall, 3-2-1 in Region IX) on Friday at 1 p.m.

The schedule does not get easier for the Trappers as they will host newly ranked No. 20 Casper College (8-3 overall, 5-1 in Region IX) on Saturday at 11 a.m.

Hill is hoping this week and a gap in between games has helped his team get fully healthy again, and the tactics they worked on for buildup play this week have improved as they take on two difficult opponents.

The Trappers will hope to have continued great play from Williams, and to have freshman Peyton Roswadovski get back on the score sheet; she’s looking to add to her impressive 11-goal tally, which has her tied for No. 7 in the NJCAA.