Northwest College hosted its annual Trapper Stampede Rodeo over the weekend, competing against six other schools in the Big Sky region. 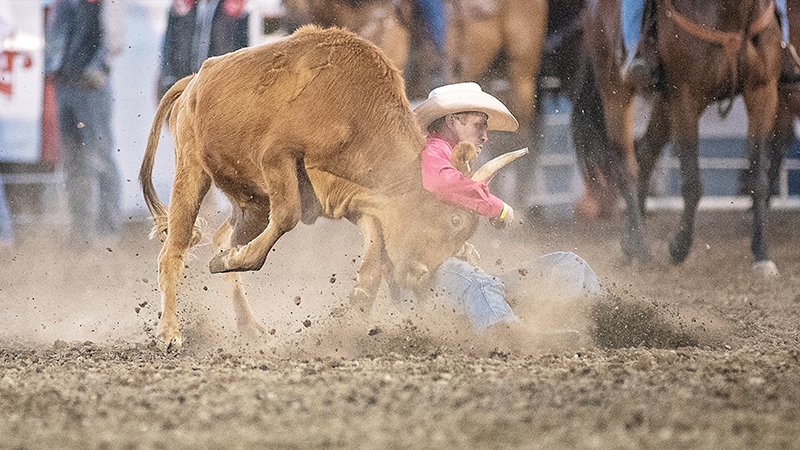 Trapper steer wrestler Paden Woolstenhulme gets a quick head catch on his steer Saturday night at Cody Stampede Park. Woolstenhulme’s time of 8.2 seconds was good for sixth place on the second day of the Trapper Stampede Rodeo.
Tribune photo by Carla Wensky 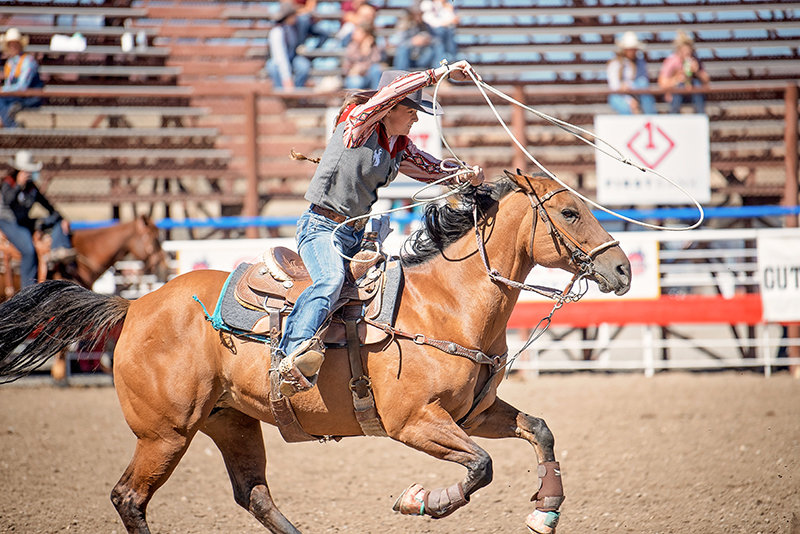 Hailey Davis chases down a calf Friday morning in the slack round of the Trapper Stampede Rodeo. Although Davis didn’t place on this run, she scored a second place finish on Saturday with a time of 3 seconds flat.
Tribune photo by Carla Wensky
Previous Next
Posted Thursday, September 17, 2020 8:20 am
By Carson Field

Northwest College hosted its annual Trapper Stampede Rodeo over the weekend, competing against six other schools in the Big Sky region.

NWC’s men’s team tallied 195 points on Friday, finishing third, and Austin Herrera was the Trappers’ top performer. A sophomore from Soap Lake, Washington, Herrera won the bull riding competition with a score of 84.

On day two, the Trappers logged 157 points, once again putting them in third place in the men’s side. The NWC women also finished third with 116.5 points.

Montana State won the overall crown handily on both days.

The home event, held at the Cody Stampede Rodeo grounds, marked the Trappers’ first event of the 2020 season, and head coach Del Nose hopes this debut serves as a learning experience for his young squad.

“We’re rebuilding, and all this is like a stepping stone for getting our kids fine-tuned to be competitive,” Nose said. “We had quite a few freshmen and injuries, so we’re looking for better performances in the next few weeks.”

Though it wasn’t the outcome Nose hoped for, it was an official event — something that didn’t seem likely too long ago because of COVID-19. Giving his athletes a chance to compete in front of a live audience was exciting for Nose.

“We were thrilled to death,” Nose said. “The turnout was great for what we were up against. The students were in compliance, and we had a lot of respect from the parents and spectators with social distancing.”

This weekend, NWC will compete in the University of Montana Western Rodeo in Dillon, Montana. There, Nose hopes to see various aspects of his team improve.

“Our roughstock needs work, and we’re working on that in practice,” Nose said. “Just getting our riders fine tuned, and hopefully we can do better in Dillon.”