Improvement was one of the main goals for the Northwest College men’s soccer team as they took a long 16-hour road trip to southern Colorado over the weekend.

Despite drawing with Trinidad … 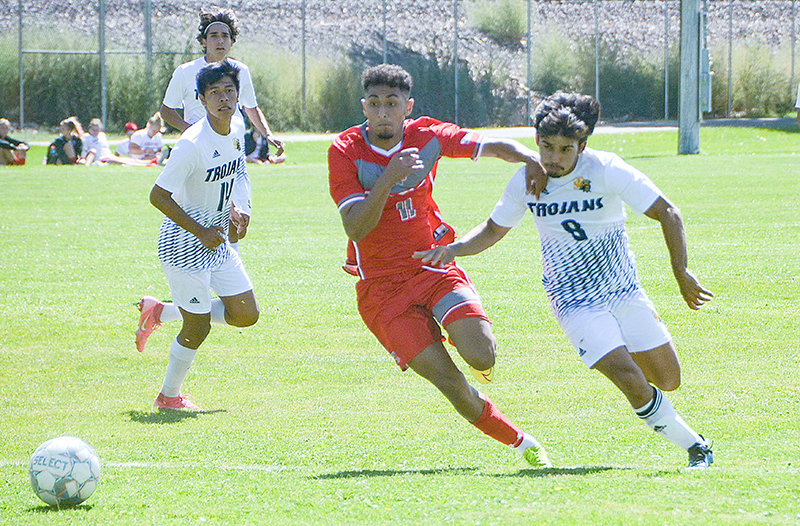 Improvement was one of the main goals for the Northwest College men’s soccer team as they took a long 16-hour road trip to southern Colorado over the weekend.

Despite drawing with Trinidad State 1-1 and losing 1-0 to Otero, NWC coach Rob Hill felt his team made strides after not playing in a competitive match for two weeks.

Hill said his team (0-5-1 overall, 0-2-1 in Region IX) went into the road trip shorthanded, with only 16 rostered players making the trip due to COVID-19 cases and quarantines.

With a thinner roster, Hill felt his team came out with energy against Trinidad and dominated the first 15 minutes of Friday’s match — narrowly missing an opportunity to score a header to put his team ahead.

At the half the match was tied at 0-0, but Trinidad found their footing and dominated the second half.

However, NWC keeper Matias Sandoval “was outstanding,” Hill said. “Best goalkeeper in the region by a long ways.”

Thanks to the heroics of Sandoval, the Trappers were able to grab a goal against the run of play, with sophomore Orlin Castro Hernandez finding the back of the net to put the Trappers up 1-0.

Trinidad responded with a goal from David Perez to equalize, sending the match to extra time.

Hill felt that his team dominated in extra time, but was unable to find the back of the net, ending the match in a 1-1 draw.

“I felt we had been dominant for three out of the four periods,” Hill said.

After coming out of Trinidad with a draw, the team traveled to Otero Junior College on Saturday and came out sluggish, with the first 10 minutes being owned by Otero.

The rest of the half was even as both teams had their opportunities. Hill felt his team needed to take advantage of more counterattacking opportunities rather than continually playing a possession style attack.

The Trappers conceded a goal in the 75th minute from Otero’s Taketo Onodera; Hill said there was a mistake off of a throw-in that led to a quick counter for the hosting Rattlers.

Despite the loss, Hill feels confident about his team moving forward.

“From where we were a few weeks ago, the difference is night and day,” the coach said.

Moving forward, he said the team needs to focus less on possession at times, and find opportunities to get in behind the back line and create shots off of counter attacks.

The Trappers took on Central Wyoming College in Riverton on Wednesday. Read more about that game and a preview of the NWC’s Oct. 1-2 home games next week.