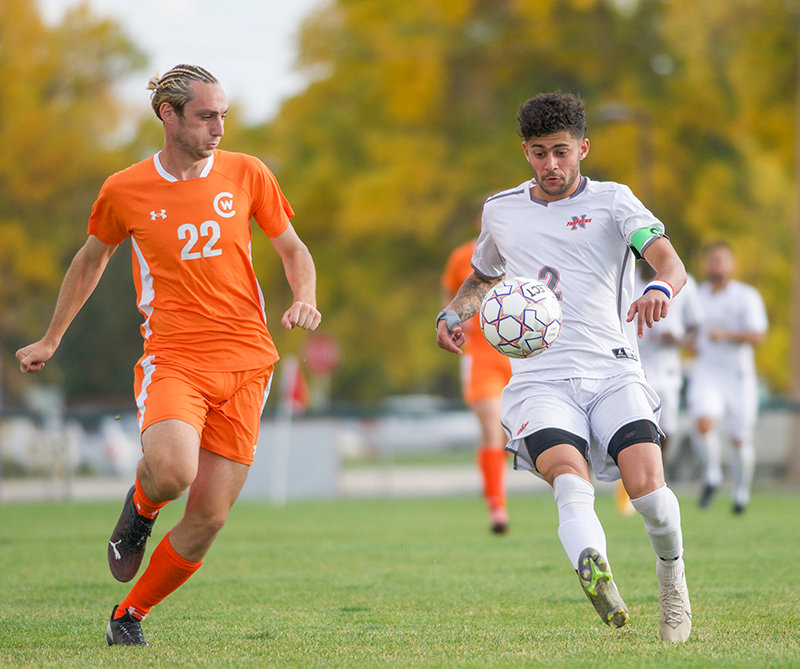 Winger Martin Gonzales-Gutierrez (right) attempts to chip the ball over a Central Wyoming defender Friday as the Trappers looked to make a late push for an equalizer in a 2-1 defeat.
Tribune photo by Seth Romsa
Posted Thursday, October 14, 2021 8:05 am
By Seth Romsa

Early on in the match, the Trappers conceded a goal to the Rustlers (3-10 overall, 0-5 Region IX) off a floating cross from Josh Clarke to Christian Cruz. It was a goal that NWC coach Rob Hill felt could easily have been prevented.

“One versus four, long floated ball and we just watched it go over and get headed in,” Hill said, adding, “We have to eliminate mistakes and silly goals.”

Continued back and forth play with no results led to the game heading into halftime with the Rustlers leading 1-0.

The Trappers got their equaliser early in the second half, after a cross by sophomore wing Martin Gonzales-Gutierrez found its way through the Rustler defense untouched into the back of the net.

However, that would be the brightest moment of the second half for the Trappers, as the next 15 minutes would change the tide of the match.

In the 58th minute the Trappers conceded a penalty after a foul was called in the box.

NWC normally features keeper Matias Sandoval in net, but after he suffered a dislocated shoulder the previous weekend against Casper College, Hill decided to start Bailey Jordan and rest Sandoval during the nonconference matchup.

Jordan faced down Issahia Rodriguez, with Rodriguez getting the better of the Trapper keeper, putting the Rustlers up 2-1.

Things got worse for the Trappers, as another penalty was conceded via foul just four minutes later.

Jordan again faced down the penalty taker and guessed the wrong way, but fortunately for the Trappers, the ball bounced off the post and back into play with no followup effort.

Then, persistent argument between Trapper striker Thomas Muller and Rustler fullback Walid El Waziki led to each player receiving a yellow card. The players continued the argument with each other and the official, leading to both players being shown a subsequent yellow card and a red card, removing each player from the match.

The Trappers began to apply more and more pressure, and got an additional opportunity when the Rustlers’ Josh Clarke was shown a second yellow card for arguing with the official. This gave the Trappers 13 minutes left in the match to attempt to find an equalizer with a man advantage.

NWC threw everything forward in the final minutes, but last ditch defending efforts by the Rustlers prevented the Trappers from finding a second goal, ending the match at 2-1.

Heading into the weekend, the Trappers will host their final two home matches and final regular season matches of the season.

The Trappers lost 4-0 earlier in the season when they visited WNCC in Scottsbluff, Nebraska, being outshot 22-2 by the Cougars.

The Trappers will see the return of Sandoval in net, but will be missing Muller due to his red card; Powell High School graduate Sam Bauer is likely to get playing time in his absence.

Friday will honor the 75th anniversary of Northwest, with each entrant to the event receiving a T-shirt.

The Trappers will then follow up on Saturday at noon with a matchup against Northeast Junior College (4-8-1 overall, 0-4-1 Region IX).

Earlier in the season, NWC fell to Northeast 3-2 in Sterling, Colorado, but were later granted a win because Northeast fielded an ineligible player.

Saturday will honor the Trappers’ sophomores, as they look to gain an advantage in the Region IX standings before the first round playoff next weekend.

Currently the Trappers sit in sixth place and would head to Otero College in La Junta, Colorado, in the first round. However, the Trappers have an opportunity to jump to fourth place and host a playoff matchup if they can win their final two matches.