With the Wyoming Department of Agriculture’s Division of Technical Services, Cort Jones performs a lot of different tasks over an area covering about one-fourth of the state of Wyoming. His … 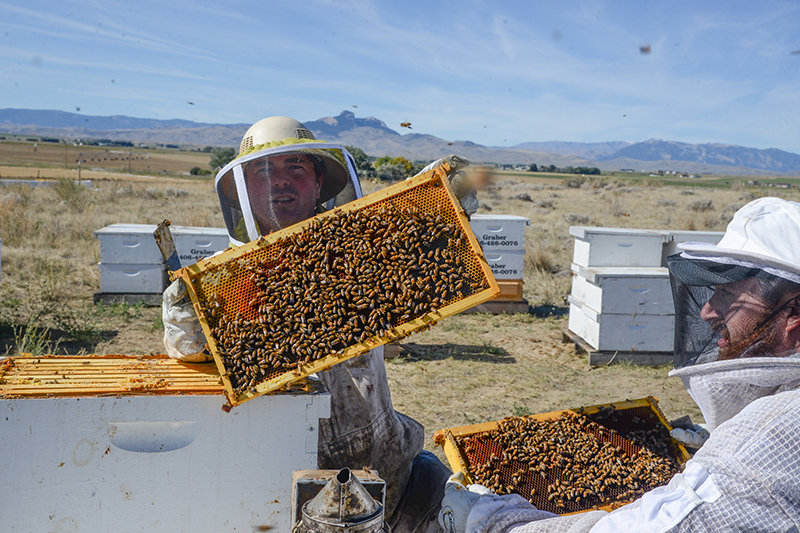 Beekeeper Noah Graber holds up a panel from one of his hives west of Powell. Cort Jones, with the Wyoming Department of Agriculture, inspects hives for diseases. In order to ship the bees to other states, apiary owners need to have the bees certified.
Tribune photo by Kevin Killough 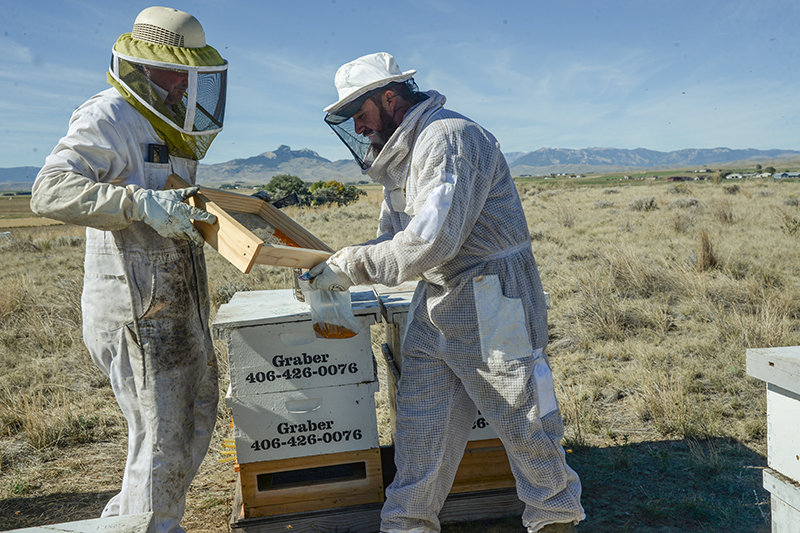 Noah Graber pours pollen into a bag held by Cort Jones. Besides honey, pollen is a product beekeepers in Wyoming produce.
Tribune photo by Kevin Killough 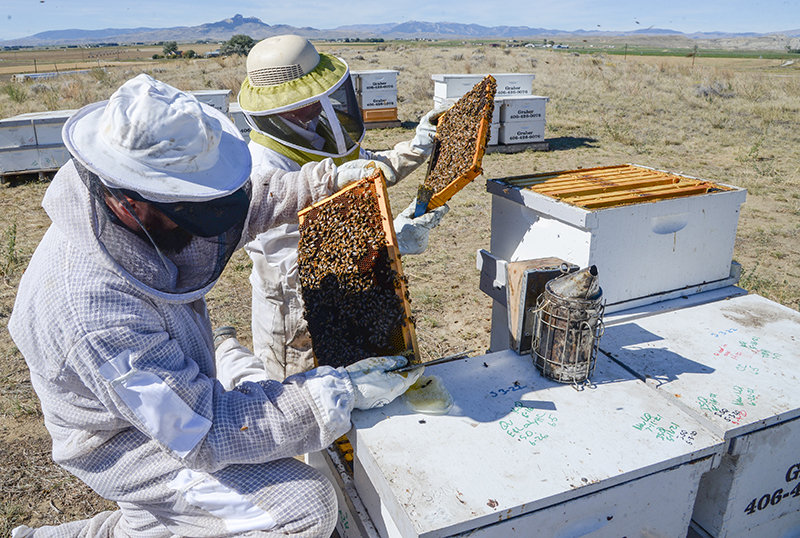 Cort Jones and Noah Graber hunt for an elusive queen bee among the dozens covering the panels, at a hive west of Powell. Bees are shipped to other states where they play a vital role in pollinating many crops, especially almonds in California.
Tribune photo by Kevin Killough
Previous Next
Posted Thursday, September 30, 2021 8:15 am
By Kevin Killough

With the Wyoming Department of Agriculture’s Division of Technical Services, Cort Jones performs a lot of different tasks over an area covering about one-fourth of the state of Wyoming. His territory stretches from Yellowstone National Park to the Bighorn Mountains, and from the Montana border down to Sweetwater County.

Anyone who has pumped their gas or bought weighed items at a grocery store has benefited from one of the things Jones does, which is certifying grocery store scales and gas pumps.

“We make sure that when you buy 5 gallons, you get 5 gallons,” Jones said.

The division also tests hemp for levels of the psychoactive chemical known as THC. Hemp is the same plant as marijuana, and one of the requirements to grow hemp is to keep it below 0.3% THC. This makes it unusable as an intoxicant.

The division also plays a key role in the health of an important agriculture industry. Bee populations are very susceptible to diseases, and if they are not properly managed, it can have far-reaching impacts on the beekeepers. While it may seem frivolous making sure bugs don’t get sick, it’s a service the industry welcomes.

But unlike sheep, cows and pigs, bees fly. This makes managing disease a bit more complicated than with animals.

When most people think of bees, they think of honey. Honey is one commodity the industry produces, but that’s not how beekeepers earn a living.

Pollination is where the industry finds most of its revenues. More than 100 crops in the United States require pollinators. These include non-citrus fruit trees, berries, melons, squash, and almonds.

A lot of Wyoming honey beekeepers ship their bees down to California every year, where they pollinate almond trees.

Many alfalfa growers in the Big Horn Basin keep leafcutter bees, which don’t produce honey. They are solely used in pollination.

In 2004 and 2005, varroa mites decimated bee hive populations. Beekeepers reported losing 30% to 90% of their colonies. It led to widespread media coverage of what is known now as colony collapse disorder and concerns about what the loss of bees would do to agriculture. Since it was first identified, the beekeeping industry has become much more keen to manage disease, with the help of the Department of Agriculture.

The problem with managing hive health is that bees are social creatures who refuse to follow social distancing guidelines.

“It’s like putting your kids in daycare: If one gets sick, they all get sick,” Jones said.

Besides spreading disease within their own hives, the bees fly around, spreading it to other hives. Then the industry is shipping the bees all over the country and back home again. It’s not hard to see how diseases can get out of hand if they’re not controlled properly.

Commercial beekeepers register with the Wyoming Department of Agriculture, and there is a map on the department’s website of every commercial hive in the state. Each marker shows the owner and how many hives are at the location.

Jones said compliance with the program is not really much of an issue.

Registering also lets pesticide applicators know where the hives are located so they don’t spray them.

Besides the mites, Jones also checks hives for foulbrood. When a hive gets infected with the bacteria, it smells like rotten fish. There’s no treatment for foulbrood, so when it’s found, they incinerate the hive.

Jones also checks for invasive species like the small hive beetle and fire ants. Beekeeping is a route by which these pests can easily make their way out of their native regions. Small hive beetles originally came from sub-Saharan Africa by way of bee hives.

Once a hive is deemed healthy, the department gives it a certification, which truckers need to ship bees across state lines.

“Our whole job is to do health checks on apiaries so we’re not bringing in and sending out disease and invasive species,” Jones said.

Considering what would happen to agriculture if bee populations were to collapse, it’s a little-known program that makes a big impact.