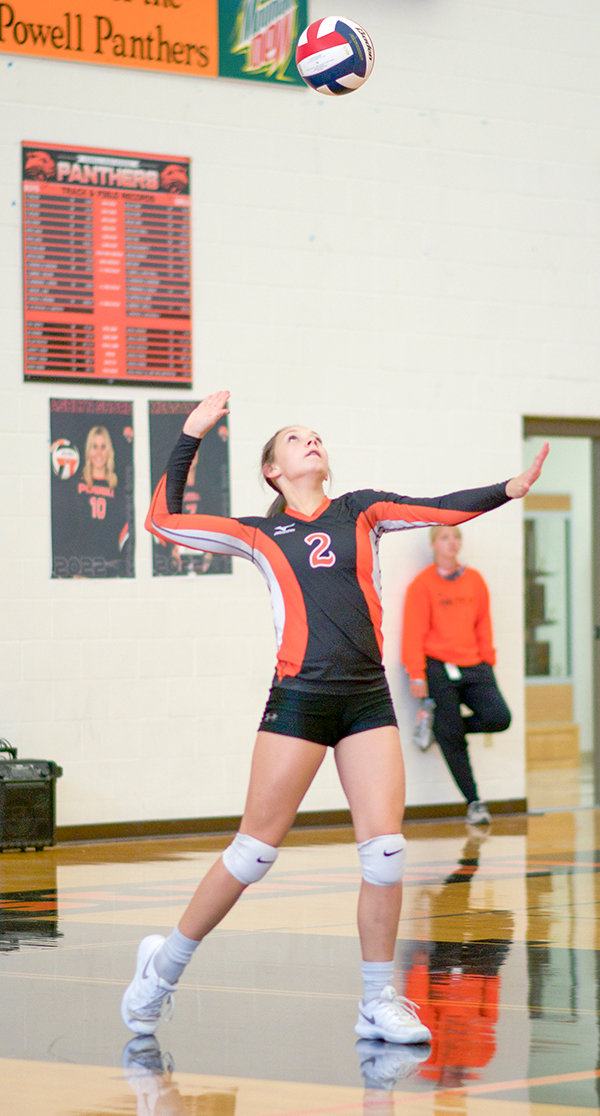 PHS freshman Catelynn Floy serves against Lovell during the volleyball team’s final match of the season on Oct. 22. The Panther freshmen enjoyed a successful campaign, winning two tournaments and finishing with a 23-4-1 record.
Tribune photo by Seth Romsa
Posted Tuesday, November 23, 2021 8:05 am
By Seth Romsa

Panther freshman coach Greg Stenlund said the year was filled with memories, including a tournament win in Powell and a second one in Buffalo.

He said the event in Powell in particular was memorable because the championship match came with a win against Cody. It included a match-sealing block from Catelynn Floy to give the PHS freshmen their first victory over their rivals.

Stenlund felt his team may have improved the most in their ability to run quick sets, which allowed them to run quick offensive sets effectively and make the game more fun to watch.

Stenlund is used to coaching boys during basketball season, so he said one of the things he learned this season was how to instruct players differently during high energy situations.

“The girls learned first and foremost that volleyball is a game of timing,” Stenlund said. “Another thing I hope and think they took away was the importance of supporting each other in all situations, good and bad.”

One particular thing that stood out to the coach was his players’ ability to support their teammates. He noticed that, regardless of situations, they always had each other’s backs.

Along with their ability to perform quick sets, Stenlund said he was impressed with how many higher level techniques the team was able to incorporate into their arsenal as they improved their blocking footwork, timing on hitting quick sets, understanding of the rotations and consistent defensive positioning.

Standout players for the team included Saige Kidd and Floy in the middle. Both were fantastic blockers and began hitting quickly with consistentcy toward the end of the season, Stenlund said.

Kenna Jacobsen served as an outside hitter and when her timing was right, Stenlund said she had some amazing hits for a freshman.

Alexa Richardson served primarily as the team’s libero but also showed her abilities as an outside hitter throughout the season.

Haylee Akin and Kodee Asay made their rotation throughout the season along the net, serving as outside and middle hitters and providing important serving for the team.

The two setters for the team, Cami Gernhart and Peyton Borcher, progressed throughout the year and were effective in helping the team learn the ability for quick hits.

Kaci Kysar and Grace Estes were also important rotation players for the team, their coach said, and they grew throughout the season.

“The freshman girls were a super fun group to coach,” Stenlund said. “They will add lots of strengths and depth to the lady Panther volleyball program over the next three years.”