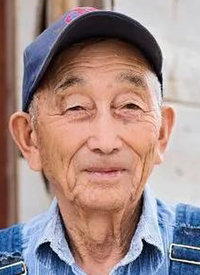 Tak attended grade school at Iona School and then Osgood Elementary School through the eighth grade. For three years, he attended high school in Ammon and then Idaho Falls High School, where he graduated in 1944.

In November 1949, Tak moved to Heart Mountain to start farming his homestead. On Feb. 20, 1954, he married the love of his life, Emmy Yamasaki, in the Trinity Church in Idaho Falls. Because his “bachelor pad” homestead was not suitable for a new wife, Tak bought the Hutchinson homestead. Tak and Emmy farmed together — they were outstanding in their field. He retired from farming at the age of 93.

Tak worked hard — getting up early to irrigate and working late to finish harvesting crops.

But, he also took time for family and fun. Tak was an avid reader, keen fisherman, hunter, winning poker player, bowler, and occasional golfer. Tak and Emmy, along with Koe and Ritz Ando, were faithful fans of Craig’s and Jenny’s high school sporting events. Tak’s adventures took him to tours of the John Deere Forging Plant and of the Coors Brewery for growers’ only, dream fishing trips to Alaska, paragliding in New Zealand, and ziplining in the U.S. Virgin Islands. He also traveled to Hawaii, California, Texas, Florida, Branson, Las Vegas, Japan, Hong Kong, China and Australia. He enjoyed cruises to the Caribbean, Panama Canal and Alaska, as well as winter ski vacations with family and relatives to Aspen, Sun Valley, Big Sky, Heavenly Valley and Vail.

Tak’s impact on the farming community was immeasurable. In addition to providing sage farming advice to new farmers, Tak served on the Heart Mountain Co-op Board, the Mountain View Club, Park County Weed and Pest, and the Farmers Home Administration. He also received numerous farming awards, as well as a cover story in the Raised in the West Magazine. In 2018, he was honored to present his cultural, farming, and military history to the Wyoming Natural Resources Conservation Service.

Services will be at 10 a.m. Saturday, April 9, at the First United Methodist Church in Powell. In honor of Tak, the family encourages you to wear anything John Deere. Interment will be at Crown Hill Cemetery in Powell. In lieu of flowers, memorials may be given to the First United Methodist Church, Heart Mountain Foundation, or NWC (Northwest College) Foundation.