As was to be expected this spring, Mother Nature reared her ugly head as snow brought about multiple schedule adjustments midway through the spring season. 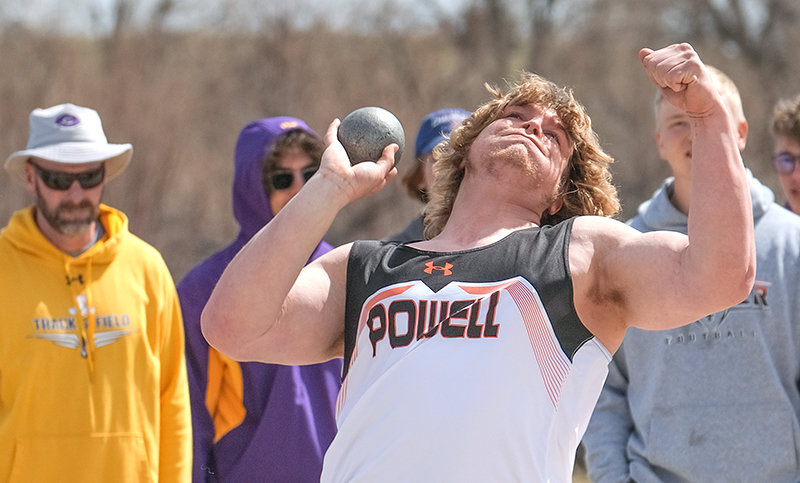 PHS senior Sheldon Shoopman throws the shot put during Jerry Campbell Invitational in Buffalo on April 2. Spring sports were put on a brief pause as a snowstorm swept through the Cowboy state last week.
Tribune photo by Seth Romsa
Posted Tuesday, April 19, 2022 8:15 am
By Seth Romsa

As was to be expected this spring, Mother Nature reared her ugly head as snow brought about multiple schedule adjustments midway through the spring season.

The high school track team had two meets canceled last week, after their meet in Laurel on Tuesday and their meet in Worland on Thursday had the team out of action all week.

After two strong team performances at the L.A. Kohnke on Saturday, April 9, the team will have been out of action for nearly two weeks.

The Panthers will head to Cody on Thursday for a dual starting at 1 p.m. as they look to regain their momentum with the state meet starting exactly one month away on May 19.

“I think the physical rest will be helpful, but this time of the school year, it’s good for the mental aspect as well,” Panther head coach Scott Smith said.

Smith is hoping his team can come out strong, as he understands it is difficult for his team to simulate the intensity of a meet at practice.

The team is continuing to work on its conditioning, and Smith said it will focus on proper form over the next couple of weeks.

After the meet on Thursday, the Panthers will again stay close to home as they head to Lovell on Saturday at 9:30 a.m.

They are then scheduled to take part in the Montana/Wyoming Border War in Sheridan on Tuesday, April 26. That will be the third meet in six days as they head down the final stretch of the season.

Both the boys and girls have five athletes pre-qualified for the state meet.

The middle school program had a meet canceled on Tuesday in Worland. The Cubs will take part in a Cody invitational on Saturday, which starts at 9:30 a.m.

The Cubs are quickly progressing through the season, as the conference meet is just over two weeks away on May 7.

Both soccer teams had a crucial matchup rescheduled last week after the matches against Worland on Tuesday were postponed until next Monday, April 25.

The No. 2 boys were set to take on No. 1 Worland on Tuesday, April 12, in a home rematch of the Panthers’ only loss of the season.

With the rescheduled game and the inclement weather, the Panthers were forced inside for much of the week.

Panther boys’ head coach David Gilliatt said the team was able to get one good practice outside before it was forced inside to focus on control and conditioning.

“Soccer in the spring requires adaptability as the weather doesn’t always cooperate,” Gilliatt said. “The guys got all of the three-day Easter weekend to rest, and we will get back to it on Monday when the weather looks nice.”

After the reschedule, the Panthers now have three games in four days. The team heads to Lander on Friday at 5 p.m. and Pinedale on Saturday at noon before returning home Monday to face Worland at 6 p.m.

“We will need to be strategic in our substituting and rely on all of the guys to share the load over these next three games,” Gilliatt said. “We will rely heavily on substitutes stepping up this weekend to play extra minutes to allow starting players the rest they will need on Monday. I am confident our team will rise to the challenge though.”

The Panther girls are set for a similar schedule this week, as they have key midseason matchups that will go a long way in determining if they make the state tournament.

Powell heads to Lander on Friday at 3 p.m. for a rematch with the Tigers. The Tigers defeated the Panthers 7-0 in their first matchup.

After Friday, the Panthers head to Pinedale on Saturday at 10 a.m. to take on the Wranglers; who the Panthers defeated 3-2 in the opening weekend of the season.

Powell then returns home to take on Worland on Monday, April 25 to take on the Warriors at 4 p.m. Worland defeated the Panthers 2-0 at the Pinnacle Cup in March.

The girls currently sit in sixth place in the conference, but they are within striking distance of Lyman and Worland, who sit ahead of Powell in the loss column.

“The weather this week was very unpredictable, forcing us inside, but also allowed for injury recovery and continuing to learn quick play,” Panther girls’ head coach Kaitlin Loeffen said. “I hope the girls can trust each other to play their positions and give it their best effort.”

All teams currently have one conference win.

The Powell Middle School soccer games scheduled against Riverton at home on Thursday, April 14, have been rescheduled for Tuesday, May 3, at Powell High School.

The Pioneer varsity team had its games on Saturday in Miles City canceled after there were reports indicating 2 feet of snow on the field.

The games scheduled for Saturday against the Billings Halos have been canceled due to the Halos shutting down their program.

Manager Jason Borders said Powell is planning to schedule a doubleheader this week against Lovell in Cowley.

The games are tentatively scheduled for Thursday at 5 p.m. and 7 p.m.

The C team games that were scheduled for Sunday, April 17, have been postponed, with no rescheduled date announced as of press time.