Curious, fearless and on guard for grizzlies, llamas help hunters in difficult terrain

When William Hinz drew a tag for a once-in-a-lifetime dream hunt, he knew he was going to need help. His plan for a 10-day trip into the Thorofare included a lot of steep terrain, but he wasn’t …

Curious, fearless and on guard for grizzlies, llamas help hunters in difficult terrain 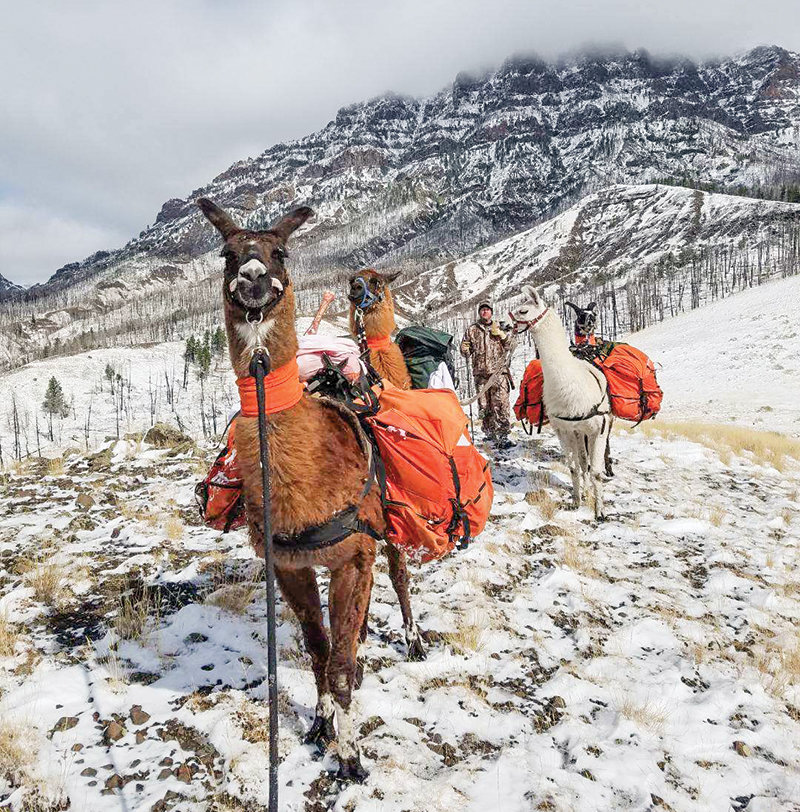 William Hinz and Dan Culter hunt with the help of llamas leased from Llamas Unlimited. The species can carry 80 pounds each and are sure-footed in the mountains.
Courtesy photo 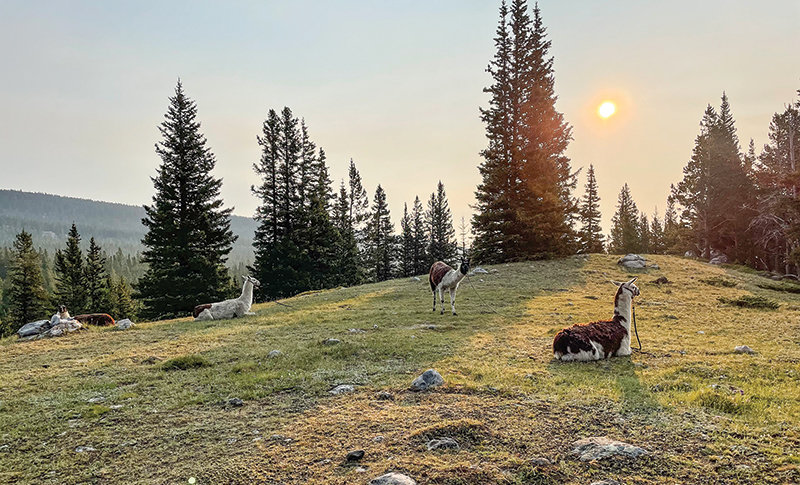 Llamas relax on a hillside near sunset in the Bighorns between hikes. Levi Gerlach names each of her 38 llamas after local mountain peaks, due to her love for the area.
Courtesy photo 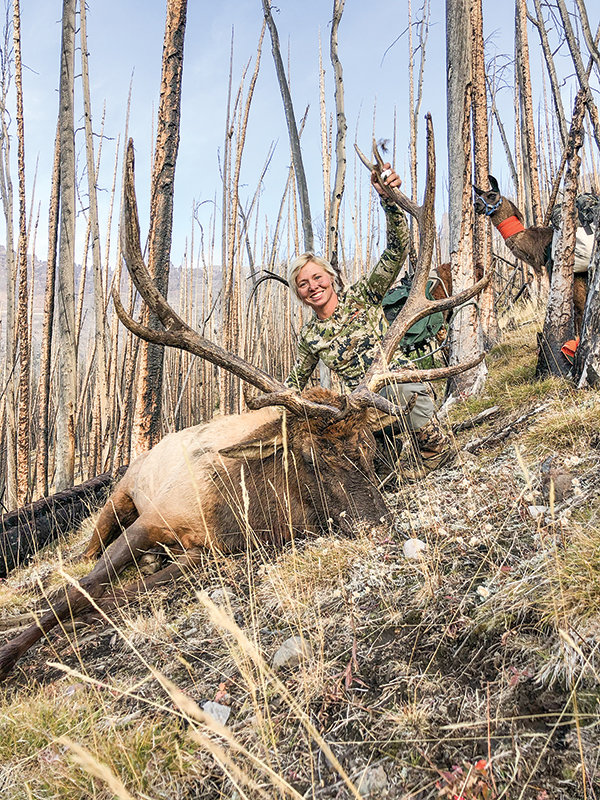 Levi Gerlach poses with her 2020 bull elk she hunted with the help of her llamas. The llamas are so popular, the Gerlach family is now breeding their own llamas so they can serve more people.
Courtesy photo 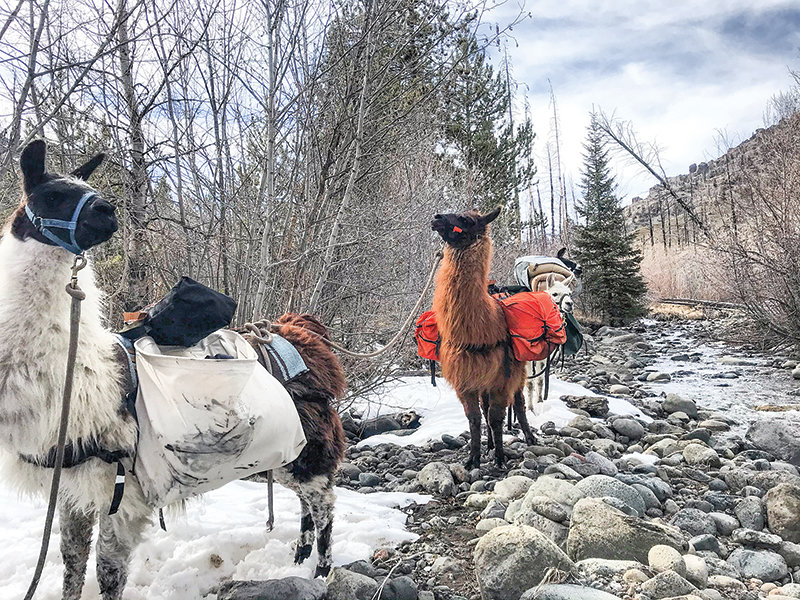 Llamas are two-toed and can easily navigate the hardest of terrains while carrying camping gear or harvested animals.
Courtesy photo 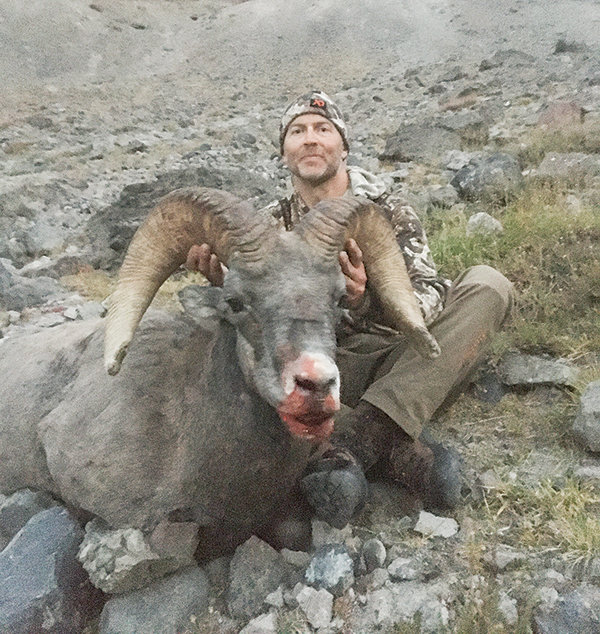 William Hinz poses with his bighorn sheep, which he harvested with the help of llamas rented from Llamas Unlimited near Powell.
Courtesy photo
Previous Next
Posted Thursday, September 2, 2021 8:15 am
By Mark Davis

When William Hinz drew a tag for a once-in-a-lifetime dream hunt, he knew he was going to need help. His plan for a 10-day trip into the Thorofare included a lot of steep terrain, but he wasn’t about to let that stand in his way.

“It took me 21 years, but I finally drew my bighorn sheep tag,” the Cheyenne fireman said.

“We were going into like super big country, you know, huge elevation gains. I’ve hunted on horses before — good horses and bad horses. I didn’t want to have a blow up on a horse in that type of environment, because, legitimately you’d have to be helicoptered out.”

After doing a little research, he stumbled on an article about hunters using llamas due to their sure-footed, low maintenance nature. Looking a little further he found a new Powell-area company: Llamas Unlimited.

It seemed like the perfect set-up, Hinz said. He could head to Park County, rent a few llamas and a trailer and only need to tow them about an hour to his destination. He was sold, despite never spending time with the animals before.

Hinz’s gamble paid off: Not only were the three llamas easy to work, they had the added bonus of being good guards at camp in grizzly bear habitat.

“They’re very curious animals that are always on guard,” he said. “It was easier to sleep up there in grizzly bear country.”

Hinz got his sheep and the llamas earned his respect. He also spoke very highly about local llama tamer Levi Gerlach of Llamas Unlimited.

Hinz and hunting partner Dan Culter took a mandatory three-hour class from Gerlach prior to heading to the mountains. They were introduced to the animals, learned some care rules and how to pack the llamas, Hinz said.

“It was easy. They’re such laid-back animals,” he said. “And moving through the tough terrain was no big deal for them.”

The Powell-area Llamas Unlimited opened four years ago, but the small business wasn’t really advertising until recently, Gerlach said. Five years ago, Levi and her husband, Justin — who are avid backpackers — were still researching ways to carry equipment in and out of their campsites. They wanted to do it in one trip, due to a mishap with a grizzly bear while carrying out one first load.

“A grizzly ate our entire camp. It destroyed our tent, ripped our sleeping bags, and [destroyed] everything,” she said.

The Gerlachs looked into using pack goats, but they aren’t legal in the
Absaroka range due to the possibility they can pass diseases on to bighorn sheep.

However, in their research, the couple started finding a few people who had llamas. The animals aren’t cheap — most cost around $5,000, Levi Gerlach said — but the couple made the investment in their first five llamas. By the fourth training trip “it was a go,” she said, adding, “then we got five more.”

After that, they started to get calls from people with strange requests.

Now the couple has 38 llamas and they’re starting to breed their own rather than driving around the two-state area looking for llamas and knocking on doors. They need more to meet the demand as people find out about the advantages of traveling with the beasts of burden.

Each llama can carry up to 80 pounds and requires very little care. They need very little supplemental food and water while on the trips.

“They don’t need water like a horse does,” Gerlach explained.

The couple has been on trips of up to three days without supplemental water for the pack animals and there are plenty of creek crossings for a llama to fend for itself. They don’t require much supplemental grain, preferring to nibble on wild grasses as they go, she said.

Llamas are a member of the camelid family, domesticated in the Andes of South America and widely used as a meat and pack animal since the pre-Columbian era. They’re social animals, so when you rent llamas, Gerlach requires they be rented in groups of two or more.

Llamas can learn simple tasks after just a few repetitions, so they are perfect for the training required to be a good rental animal.

Gerlach purchased the llamas from ranchers who mostly let them go wild, meaning they have had some bad traits, like spitting. But as she works with them, they are more than happy to simply follow along on a lead rope and are content to be tied to a stake at night.

The species is fearless and makes great guardians, she said. Whenever they see something that’s not right, llamas alert the camp.

“They make the goofiest alarm noises,” Gerlach said. “It’s like a donkey pig, sort of, and very loud. It’s almost like [the sound of] a big squeaky toy.”

Having an alarm in grizzly country is important, she said.

“We always have grizzlies coming into camp. And the llamas warn whether it’s the middle of the day or if it’s midnight,” she said. “Having that alarm is pretty cool.”

Gerlach names all her llamas after nearby peaks. The first was Boulder. Now they have Cedar, Rattler, Carter and Cody, to name a few.

“Our love for the mountains was the impetus for all of this, so it made sense,” she said.

The new business is very brisk these days. Some customers make reservations as much as a year in advance, but at least two months is suggested. Even if you get on the list, that doesn’t guarantee you’ll be driving away with Gerlach’s “babies,” she said. The three-hour class is as much for her peace of mind as it is to train hunters and hikers how to care for the animals.

“I’ve turned down two groups,” Gerlach said of customers who weren’t respectful of her animals. “I couldn’t send my llamas out with them, so I gave them a full refund. I just couldn’t.”

The Gerlachs also run a hunting camp in the South Fork. Both Levi and Justin are experienced hunters and hope to buy a permanent site soon. The llamas are mostly rented by hunters, but they join a lot of anglers and hikers on outdoor excursions as well.