For the first time in four years the Powell volleyball team is 2-0 to start the conference season. The Panthers defeated Thermopolis on the road Friday 3-0, and beat Worland in their home opener … 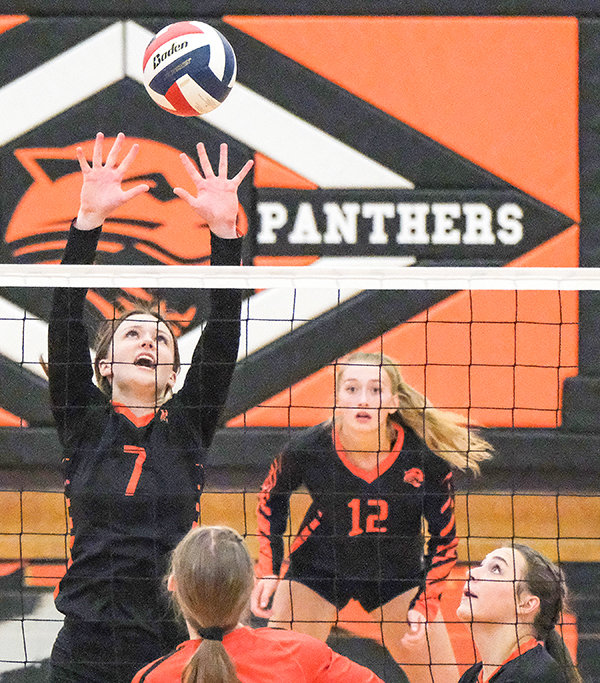 Waycee Harvey reaches high, trying to get a block against Worland on Saturday in the Panthers’ home opener.
Tribune photo by Seth Romsa 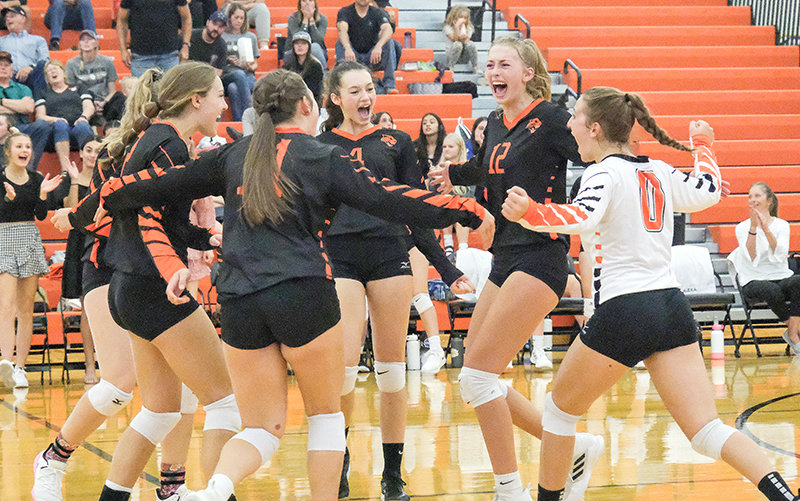 The Panther volleyball team celebrates after winning the second set against Worland on Saturday. Powell defeated the Warriors in conference play for the first time since 2018.
Tribune photo by Seth Romsa
Previous Next
Posted Tuesday, September 20, 2022 8:20 am
By Seth Romsa

For the first time in four years the Powell volleyball team is 2-0 to start the conference season. The Panthers defeated Thermopolis on the road Friday 3-0, and beat Worland in their home opener Saturday 3-1.

Heading out on the road Friday night, Powell (10-5-1 overall, 2-0 3A Northwest) knew a fast start in Thermopolis (2-11 overall, 0-1 3A Northwest) would help create enough momentum for the Panthers.

That fast start is exactly what they got.

“Friday night when they were getting ready to start I could tell they were focused and ready to go,” coach Lesli Spencer said.

Powell came out in the first set, and behind a strong service game dominated from the first point and walked away with a 25-5 first set victory.

That strong play continued in the second set, allowing Powell to push ahead after a closer start to finish with a 25-12 set win.

Trailing 8-0, Spencer called a timeout and brought the girls together to settle them down.

“We came out flat and had a hard time receiving serves,” Spencer said. “[I] called a timeout and got them refocused, they got one more point and then we just battled back one point at a time. It was nice to see them not just rollover and die in that third set, and find a way to battle back and win.”

After allowing one more point, the Panthers rallied and brought the game to a tie midway through the set, and pushed ahead to finish with a 25-18 third set win.

On Saturday, the Panthers returned home to play for the first time this season, matching up against 3A Northwest foe Worland (6-5-1 overall, 1-1 3A Northwest).

The match started out close between the two teams, which battled back and forth in the first set with the Panthers leading 11-9.

Then Powell began to pull away behind strong blocking and hitting, pulling ahead to 21-13 before a Worland timeout.

The second set was a battle from the first until the last point.

Throughout the set both teams were tied multiple times, and lead changes were abundant.

Worland appeared to get momentum, holding a 22-18 lead — resulting in a timeout by Spencer.

Powell battled back, winning the next three points to make it 22-21 and forcing a Worland timeout.

Powell scored the next point out of the timeout and tied the set.

Worland had an opportunity to win the set up 24-23, but a tipped ball out and two straight hits out of play gave the Panthers a 26-24 set win.

“They are really playing great together as a team and working hard every set,” Spencer said.

The Warriors came out strong in the third set, leading until midway through the set when Powell tied the score at 14.

Powell took the lead at 18-17 before a late rally for Worland gave the visitors a lead.

Powell tied it at 22, but the Warriors scored the next three points to take the set 25-22.

In the fourth set, the Panthers came out strong.

On top of the strong start by Powell, one of the Warriors starting outside hitters, Nayelli Aguayo, went down with an injury following a diving attempt into the Worland bench.

Aguayo played one point after the timeout, then left for the rest of the contest.

“As an all-around player I would probably say she is the strongest,” Spencer said. “She is a big part of their team so I hope she is OK.”

The Panthers pushed the lead out to 15-7 before another Worland timeout.

Powell led by as many as 18-9, before the Warriors rallied and tightened the contest to 19-17 late.

The Panthers responded, and finished the game with a 25-19 win.

“Beating Worland in three would have been almost shocking to me,” Spencer said. “They battled but we played pretty strong.”

Thorington finished with 22 kills in the game, followed by Waycee Harvey with eight and Sydney Spomer with seven.

Opps finished with 23 assists and Stevee Walsh had 14.

The victory capped the Panthers’ first 2-0 conference start since 2018, which was also the last time the Panthers defeated the Warriors in conference play.

“It is a big win for us coming out 2-0 on the weekend” Spencer said. “We have not been the team to chase for a long time and it is a great feeling.”

After the opening weekend of conference play, the Panthers return to non-conference action this week.

“I want them to play hard and play to their potential,” Spencer said.