A season in which the Panthers boys’ track team relied on depth in distance and field events finished with a podium finish, as Powell finished comfortably in third place at the Wyoming State … 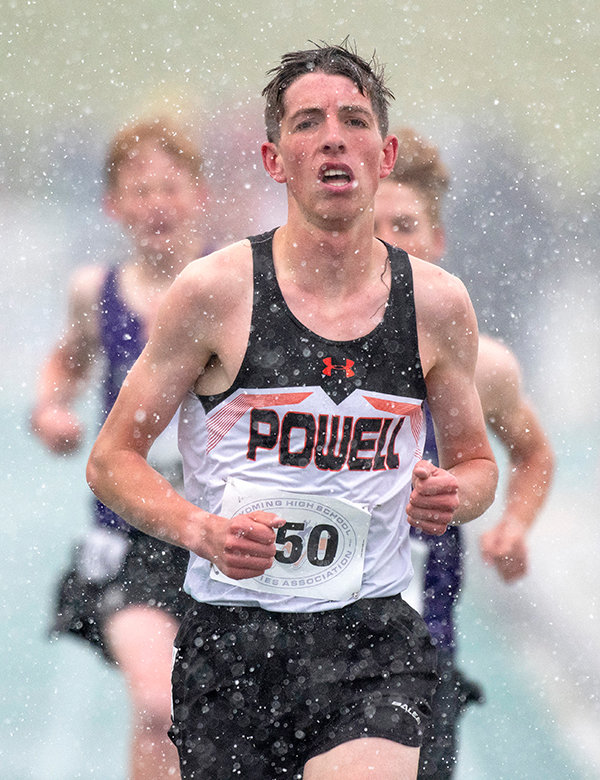 Pushing through the difficult weather, PHS junior Daniel Merritt put on a strong performance at the state track meet. He placed top six in all three distance events, including a second place in the 1600 with a season best time of 4:28.93.
Tribune photo by Mark Davis 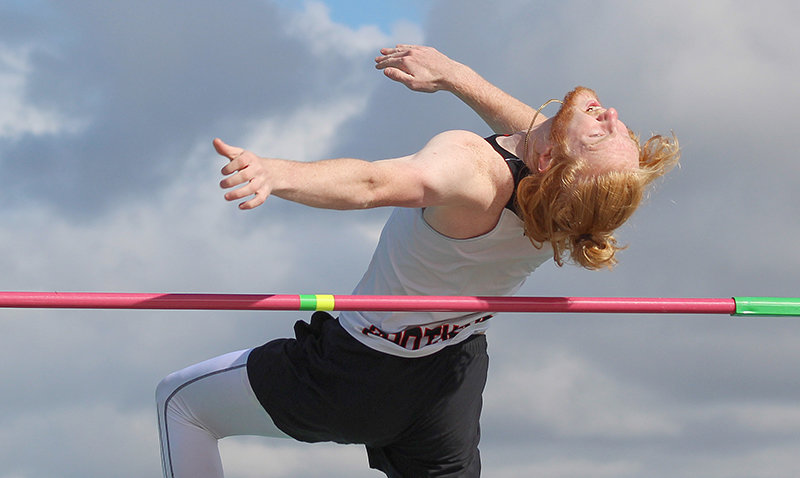 In his final time competing for the Panthers, senior Eli Weimer tries to clear the bar as his seventh place finish in the high jump helped the Panthers to a third place finish overall.
Photo courtesy Dean Bartholomew 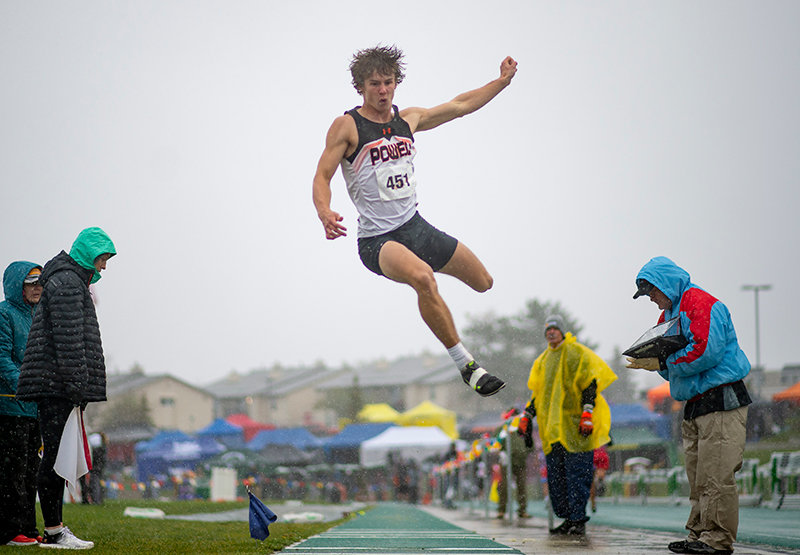 Rainy and slick conditions made for tough competition as PHS senior Zach Ratcliff placed second in the long jump with a leap of 20 feet, 6 3/4 inches on Thursday in Casper.
Tribune photo by Mark Davis 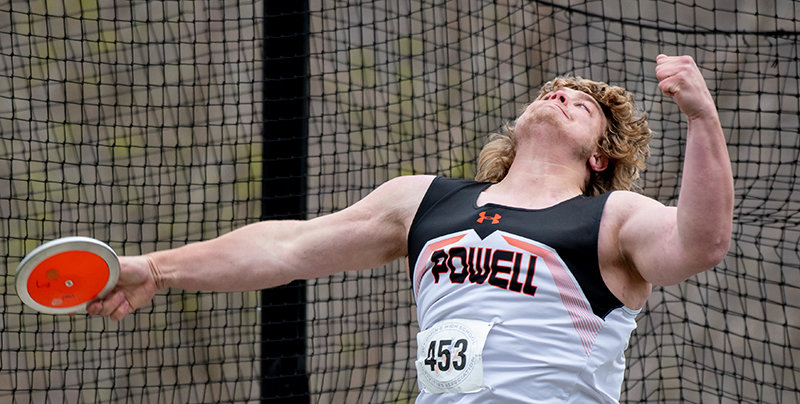 Field events helped push the Panther boys to a third place finish, as senior Sheldon Shoopman finished runner up in the discus with a throw of 143 feet, 7 inches on Friday.
Tribune photo by Mark Davis 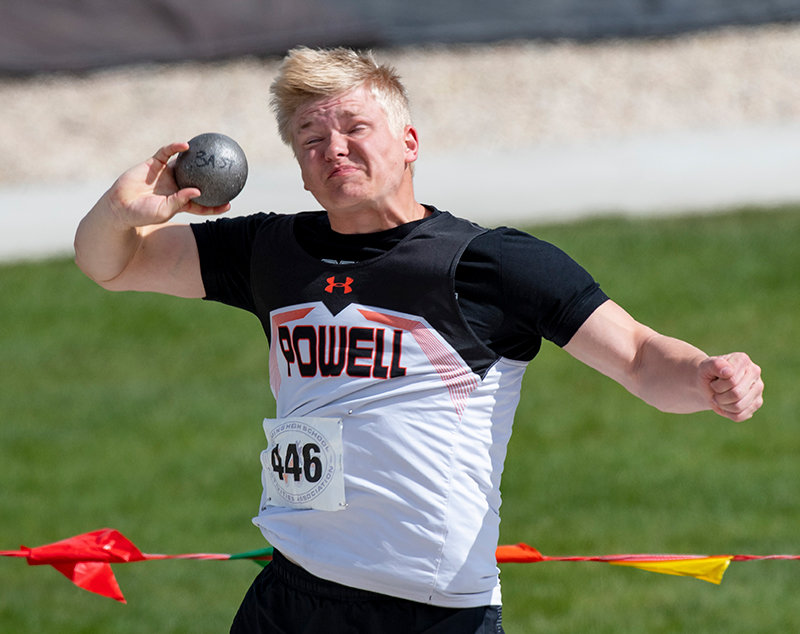 A strong season finished with a runner up performance at state for senior Toran Graham as his throw of 52 feet, 6 inches earned him the silver medal at the state meet in Casper on Saturday.
Tribune photo by Mark Davis
Previous Next
Posted Tuesday, May 24, 2022 8:20 am
By Seth Romsa

A season in which the Panthers boys’ track team relied on depth in distance and field events finished with a podium finish, as Powell finished comfortably in third place at the Wyoming State Track and Field Championships in Casper this past weekend.

“The boys had a great season and getting third with the late season injuries we had at the last two meets was a great result,” Panthers Head Track Coach Scott Smith said.

Smith said that Lander, who earned the team title, returned some athletes who were missing before the state championships, which helped push the Tigers to a team title.

Smith said he is unsure how much of a difference it would have made had the Panthers been at full strength, but he believes it would have tightened up the race between Powell, Mountain View and Lander.

The Panthers main point getters were the throwing events – a group that has helped them win numerous meets throughout the season.

Leading the way in shot put was a trio of seniors: Toran Graham, Sheldon Shoopman and Lane Shramek.

Another event in which the Panthers had strong depth proved to be the triple jump, as the Panthers took three of the top eight spots.

Senior Dylan Escalante led the way in fifth place, jumping 40 feet, 4 1/2 inches; freshman Cody Seifert placed behind him in sixth with a jump of 40 feet, 1 1/2 inches, and senior Zach Ratcliff placed eighth with a leap of 39 feet, 7 inches.

“The boys’ team was not as deep across as our girls were, but when you can put events like the triple jump and the shot put with three placers, and discus and 110 hurdles with two placers, it adds up just as well,” Smith said.

Merritt’s time in the 1600 broke a school record that was set 30 years ago by Chris Large.

The 4x800 relay of seniors Ben Whitlock and Ethan Bartholomew along with juniors Jace Hyde and Merritt placed fifth with a time of 8:51.87.

The Panthers graduate significant talent from this year’s placers.

Out of the 75.50 points the Panthers scored, 42 individual points are going to be lost to graduation in Graham, Sheldon Shoopman, Shramek, Ratcliff, Escalante and Weimer.

The Panthers will also lose Bartholomew and Whitlock on the only qualified relay team to state.

Despite those losses, Smith feels that the Panthers will bring back a strong core next year in addition to a strong eighth-grade class coming up from Powell Middle School.