The 2020-21 academic year was an unconventional time to be a Northwest College student-athlete. Between mask mandates, virtual classes and fall athletic seasons postponed to the spring semester, … 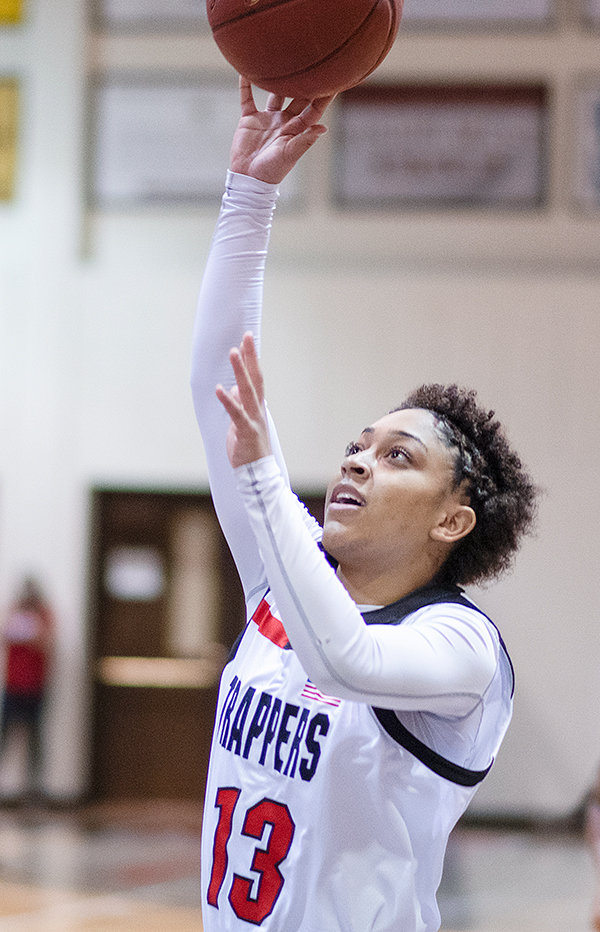 Hidaya Thornton attempts a floater in a Northwest College women’s basketball game in 2021. She suffered a season-ending leg injury in February.
Tribune photo by Carson Field 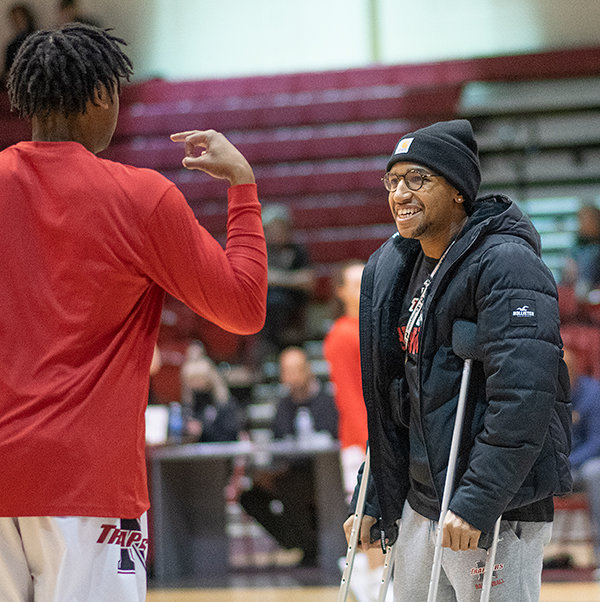 Alan Swenson (right) talks with Jerome Mabry before a Northwest College men’s basketball game. Swenson started the year as NWC’s starting point guard before tearing his achilles. He is slated to return to the team next year.
Tribune photo by Carson Field 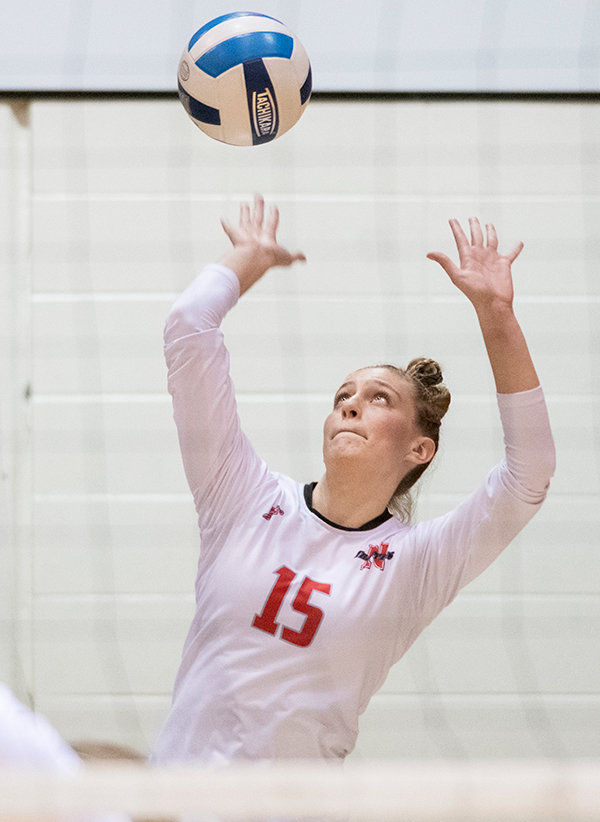 Kiah Johnson serves for the Trappers in a volleyball match. After fracturing her femur and tearing her ACL and meniscus, Johnson returned to her hometown of Morgan, Utah.
Tribune photo by Carson Field
Previous Next
Posted Thursday, June 10, 2021 8:10 am
By Carson Field

The 2020-21 academic year was an unconventional time to be a Northwest College student-athlete. Between mask mandates, virtual classes and fall athletic seasons postponed to the spring semester, college life looked different this year than it ever has for Trappers.

The trio of student-athletes had excelled in their brief seasons before suffering the injuries. Swenson scored 12 points in his only full game of 2021, Thornton’s 2.2 steals per game were a team high and Johnson led NWC with 12 kills in the Trappers’ 3-1 loss to Central Wyoming in early February.

For these three, the injuries didn’t just affect them physically. The mental toll was just as significant.

“I struggled mentally after my injury and I didn’t start feeling better until I was able to start walking around,” Johnson said. “I’ve been playing volleyball for about 10 years and never taken a break, so this was a new challenge that I had to face.”

Neither Thornton nor Johnson were local kids; both came from out of state. Thornton grew up in Aurora, Colorado, while Johnson hails from Morgan, Utah. But Swenson is from somewhere further — Brussels, Belgium.

After a successful freshman campaign where he was one of the Trappers’ key contributors, Swenson was  NWC’s starting point guard and on a journey to further prove he belonged in U.S. collegiate basketball. He didn’t get that chance in spring 2021.

“I have left everything that I have in my life because I had the opportunity to play here at Northwest College,” Swenson said. “This injury literally broke my heart, it broke me. One day, I could run and jump, and the next day I could not even stand on my feet.

“It’s the hardest thing I’ve had to face in my life,” he said.

Despite the thousands of miles between Brussels and Powell and the injury’s taxing nature, Swenson opted to stay on campus as he rehabbed. In such a difficult time away from the hardwood and his loved ones in Belgium, Swenson found comfort in having an adopted family at Northwest: teammates, coaches and other friends.

“They were willing to help and take care of me,” he said. “Basically, do anything that can make me not think about what happened.”

Thornton had previously dealt with minor injuries on the same leg, but nothing as severe as a partial ACL tear. She described the recovery process as “extremely difficult,” but like Swenson, she stayed on campus after the diagnosis, receiving overwhelming support from her teammates.

“My teammates were there for me when I needed it, and I’m beyond grateful for them,” Thornton said. “I tried to surround myself with positive people to keep my mind on track.”

While Swenson and Thornton stayed in Powell after their injuries, Johnson returned to Utah days after her season-ending fall. One of Johnson’s family friends is a surgeon in the Morgan area and had previously performed a similar surgery on her older brother.

With this connection and more physical therapy options back home, she made the difficult decision to leave.

“We trusted he would do the best work, and being home was easier,” Johnson said. “Mentally, it was better for me to be with my mom, even though it crushed me not being able to be there for my team.”

Over the past few decades, countless studies have analyzed the correlation between exercise and mental health.

Most recently, a Texas A&M University study surveyed 50 Northwest College student-athletes in November 2020, asking them a couple of questions about their mental health and how exercise positively affected it. Overwhelmingly, the randomly-sampled student-athletes said exercise served as a “stress vaccine” from mental health problems stemming from COVID-19, echoing results from similar studies conducted in the past.

Due to the severity of the three student-athletes’ injuries, they couldn’t practice or participate in traditional conditioning at full speed. But they found new ways to stay active and, in turn, stay mentally strong.

For Thornton, she has tried to “soak in a lot of sunlight” whenever possible, as well as biking regularly. In Utah, Johnson has become an avid mini golfer, playing every week with her brother, as well as exercising her abdominal and arm muscles. And Swenson said he felt “way better” as soon as he started the rehab process, spending significant time in the weight room every day.

As Swenson, Thornton and Johnson continue their recoveries, their paths look very different. Thornton’s and Johnson’s days at NWC — as well as their athletic careers — are now in the rearview mirror.

Thornton recently graduated and received her associate’s degree from Northwest. She now plans on returning to Colorado, where she will be an assistant coach for her high school, Eaglecrest.

Johnson won’t be able to play volleyball in fall 2021 due to the severity of her injury. Instead, she will attend school at Utah State University in Logan, where she will “figure out” her career path.

But Swenson’s days of sporting the red and black Trapper uniforms are not over. He plans to use the extra year of eligibility (given to every NJCAA athlete due to the pandemic) to play another season in Powell.

Eventually, Swenson hopes the extra year can be a segue to an NCAA Division I program. But before that, he will continue climbing back to full strength so he can be valuable for NWC when he steps back on the court.

“My motivation is big and I cannot wait to be practicing again,” he said. “My plan for next year is to come back stronger.”