Senate President Sen. Dan Dockstader, R-Afton, moved that Bouchard be removed from his … 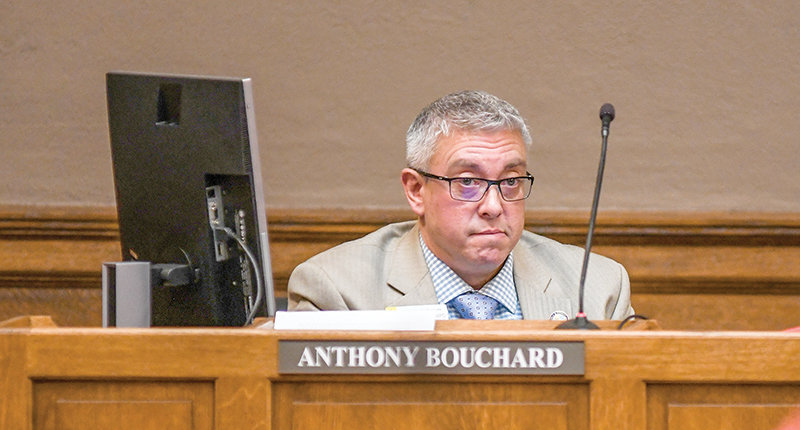 Senate President Sen. Dan Dockstader, R-Afton, moved that Bouchard be removed from his committees for “a continued pattern of intimidating and disorderly conduct, and other behavior which is unbecoming to a member of the Senate.”

Bouchard has represented Senate District 6 since 2017.

Dockstader said the move came in regard to Bouchard showing “open support for vulgar attack on a member of this Senate,” and continued such statements during the session. No details were provided about that alleged attack.

“All this impunes the integrity of the legislative bodies, which leads to a lack of respect for the Senate and the House,” Dockstader said.

Bouchard read from content he said was posted on social media, which he said started the controversy.

“I told the hospital lobbyist, video is coming on their COVID fear tactics,” Bouchard read. “They complained to leadership. Bring it. There it is.”

He continued that he had planned to cut together video from committee meetings where “fear tactics” were used “against legislation.”

Sen. Larry Hicks, R-Baggs, acting as vice president of the Senate, told lawmakers that the motion would require a majority vote.

Sen. Bo Biteman, R-Ranchester, stood to ask when a legislator had last been stripped of committee assignments.

“This is a big deal,” Biteman said. “Maybe some more discussion on what we are charging the senator with.”

Sen. Tom James, R-Rock Springs, said he took issue with the motion because it was “pretty hypocritical.”

“We have members of leadership that have been doing this for a long time,” James said. “Nothing is ever said about that.”

Bouchard said he was not surprised by the motion.

“It is funny it is always an attack on someone’s free speech you don’t like,” he said. “I don’t think we understand free speech in this chamber.”

Biteman further stated that “both sides” need to “clean up childish behavior.”

Hicks said that nothing in the motion referenced “liking” or “disliking” another lawmaker on the floor. Pursuant to Senate rules, a senator can be stripped of committee assignments “pursuant to conduct unbecoming to a senator,” he said.

“Citizens of this state should flood the gallery!!” he wrote.

Bouchard sat on the Senate Labor, Health and Social Services; Management Audit; Senate Agriculture, State and Public Lands and Water Resources; and Senate Labor, Health and Social Services committees, as well as the Select Committee on Legislative Facilities, Technology and Process. He also has declared his intention to run for the state’s sole seat in the U.S. House of Representatives against incumbent Rep. Liz Cheney, R-Wyo., and other challengers.