Sports programs at Sheridan and Gillette colleges to be cut

Vijay Pitter was in a group chat with some friends Thursday morning when he got a text message that set his world spinning. Pitter, a recent graduate of Campbell County High School in Gillette, had …

Sports programs at Sheridan and Gillette colleges to be cut 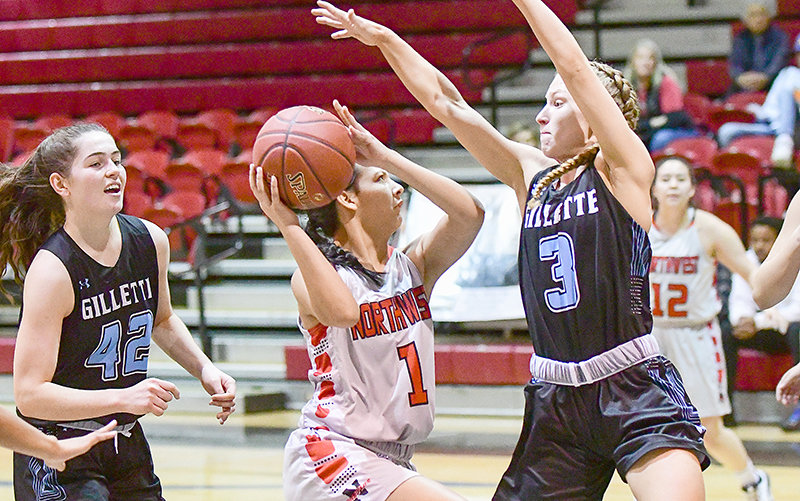 Gillette College’s Skylar Patton (at right) and Molly Coleman (at left) look to shut down NWC freshman Kendall Wright during a contest at the Cabre Gym last year. Leaders of Gillette and Sheridan colleges — which compete in NJCAA Region IX alongside the Trappers — announced last week that they’re cutting all of their athletic programs outside of rodeo.
Tribune file photo by Steve Moseley
Posted Tuesday, June 30, 2020 8:05 am
By Jack Nowlin, Casper Star-Tribune Via Wyoming News Exchange

Vijay Pitter was in a group chat with some friends Thursday morning when he got a text message that set his world spinning. Pitter, a recent graduate of Campbell County High School in Gillette, had months earlier signed to play soccer at Gillette College this fall.

“We were trying to figure stuff out for a good 35-40 minutes until we put things together and figured out the season was going to be canceled,” he said.

Pitter was one of more than 100 student-athletes at Gillette College and Sheridan College who found out that the schools, which comprise the Northern Wyoming Community College District, were eliminating their athletic programs due to a fiscal emergency brought on by the coronavirus pandemic and state revenue losses.

There was no warning that cuts were coming. Athletes, coaches, trainers, boosters and fans from both schools were in the dark until the college administrators made it official.

Davion McAdam, who graduated from Kelly Walsh High School in 2019 and signed to play basketball at Gillette College, was still trying to piece things together Friday afternoon.

“It’s crazy because literally the day before I was talking with my family about the upcoming year and my plans and goals,” said McAdam. “So this really caught me off guard.”

In a statement released late Thursday afternoon, the NWCCD said cutting most of the athletic programs at both schools was part of a larger, nearly $4 million reduction.

Eliminating the sports programs — four at Gillette College and five at Sheridan College — is expected to save the district $2.8 million. Officials said the cost of the programs compared with the revenue they generate made them unsustainable amid a financial crisis.

“This decision was far from easy and definitely not something we wanted to take away from our student-athletes,” college district president Walter Tribley said in a statement. “However, we simply cannot maintain a vision that includes full-time coaches, full-ride athletic scholarships coming from our general fund, and expensive recruitment and travel.”

Thursday’s decision not only brought an end to most of the two school’s athletic programs — the rodeo programs were saved, albeit with smaller budgets — it reverberated throughout the state.

University of Wyoming Athletic Director Tom Burman told the Star-Tribune earlier this month that even though UW was continuing to make reductions because of the coronavirus pandemic, he didn’t expect the university to have to cut any sports programs.

“We’re in the midst of finalizing our return-to-competition plan and moving forward with that,” LCCC Athletic Director Cindy Henning said. “We totally have the expectation that we will be competing, albeit in a new normal, this fall.”

“We’re going ahead as normal,” said AD Angel Sharman. “We got reassurance from our president that we are going forward as planned. It’s unfortunate that we had teams in our region drop out, but we don’t have control over that. We do have control over ourselves and that’s what we’re going to focus on.”

Even though Vijay Pitter and Davion McAdam will retain their athletic scholarships if they decide to return to Gillette College in the fall, they aren’t ready to have their athletic careers come to an end.

They’ve both reached out to schools that previously recruited them to see if they still had interest. Unfortunately, with just two months before the 2020-21 school year begins, most schools have already filled their allotted scholarships.

“It’s tough,” McAdam said. “Now I’m back in the recruiting process and I have to figure out what school is going to be best for me and my family.”

Meanwhile, supporters of Gillette College’s athletic programs have been urging fellow Pronghorn supporters to attend Wednesday’s meeting of the Northern Wyoming Community College District Board of Trustees — where the board will consider the proposed cuts — and “fight for Pronghorn athletics.”