Height is typically an important factor in basketball, but a fast Powell Panther girls’ basketball team will look to defy the odds as they head into the 2021-22 season with hopes of making a … 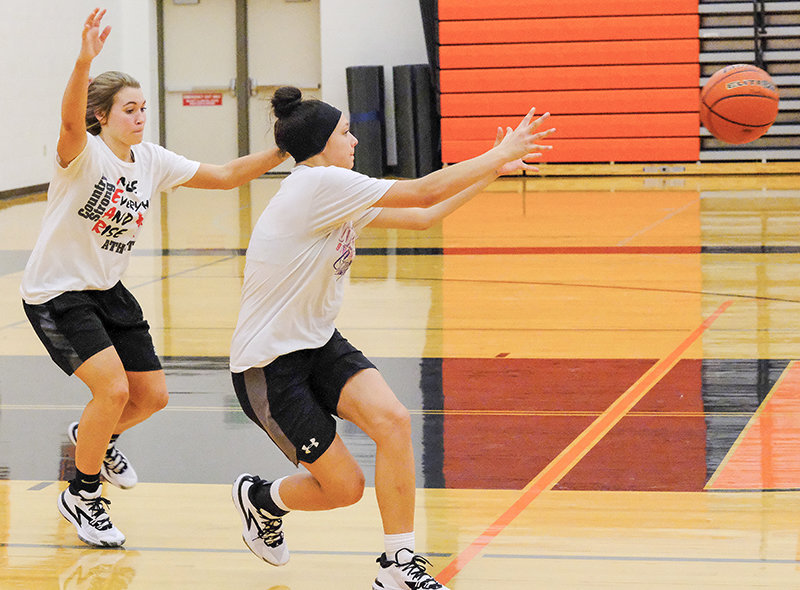 Maddie Campbell (left) goes out to defend Caitlynn Floy (right) as the Panthers worked to get open out of the post at the start of a Nov. 23 practice. The Panthers plan to rely on their speed as they head into the new season.
Tribune photo by Seth Romsa
Posted Thursday, December 2, 2021 8:15 am
By Seth Romsa

Height is typically an important factor in basketball, but a fast Powell Panther girls’ basketball team will look to defy the odds as they head into the 2021-22 season with hopes of making a run to the state tournament.

Heading into the new season, the Panthers will also turn towards a youth movement. The team lost seniors Rose Graft, Rylynn Valdez, Hailee Hyde and Madi Fields to graduation last year, and will only feature one senior on the roster this season in Kaili Wisniewski.

“Kaili is that type of kid who brings it every day,” Panther head coach Chelsea Buher said.

Buher knows that Wisniewski will bring the ability to lead the team in any fashion. Whenever the coach comes over from her job at the middle school and arrives at practice a little late, Buher said Wisniewski will get everything going without being told to do so.

The coach knows this team will be able to build throughout the season — because despite graduating four key contributors last year, they bring a wealth of experience at the junior level.

“Those three either started at some point in the [past] season or came in as a sixth man before,” Buher said.

Campbell returns with the most experience, as this will be her third season playing on varsity while Jensen and Jacobsen got significant time last year.

Buher expects those three to grow and exude more confidence this season simply because they already have that varsity experience. The coach said this team will bring speed to the game as they have fast players at every grade level.

Buher said two of her three tallest players are freshmen, and they are no more than 5 feet, 9 inches tall. How will the team deal without a lot of height?

“Well, we better learn how to box out,” Buher said.

Learning the fundamentals has been a key part of practice for the coach, as she begins each session with fundamental drills to ensure the girls are disciplined in all of the basics before moving into more complex practices.

Heading into her third year as head coach, Buher knows how to deal with rebuilding a team: nine seniors graduated the year before she came in. While the roster is being partially reconstructed, Buher is grateful it won’t be from the ground up like in years past.

The Panthers showed improved last year, going from three wins in 2019-20 to six victories a season ago. PHS lost their opening postseason game in a close contest against No. 1 seeded Lander, 30-23, but Buher felt her squad had an opportunity to take the upset, as they put together a significant defensive scheme against the Tigers. She also felt the game helped build her team’s confidence heading into this year as they attempt to make the state tournament for the first time in her tenure.

The season begins for the Panthers on the road, but not too far from home, as they will be taking part in the East-West Classic in Lovell on Friday, Dec. 10 and Saturday, Dec. 11.