It was a tale of two halves for the Trapper women’s soccer team on the road in Cheyenne and Scottsbluff, as Northwest lost 2-0 to Laramie County Community College and 7-6 to Western … 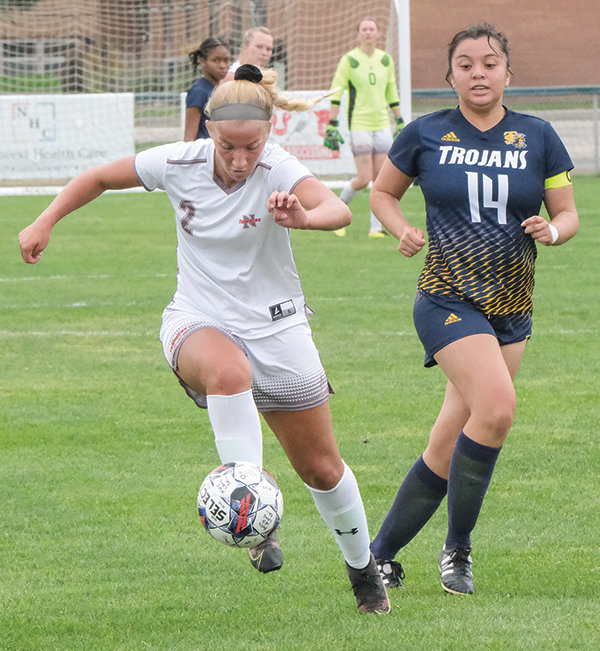 Zoey Bonner traps a ball during the Trappers’ match against Trinidad on Sept. 16 in Powell. Bonner finished with a hat trick against Western Nebraska on Saturday.
Tribune photo by Seth Romsa
Posted Thursday, September 29, 2022 8:15 am
By Seth Romsa

It was a tale of two halves for the Trapper women’s soccer team on the road in Cheyenne and Scottsbluff, as Northwest lost 2-0 to Laramie County Community College and 7-6 to Western Nebraska.

Heading to Cheyenne the Trappers (1-10 overall, 1-5 Region IX) were looking to put together some of their best play of the season against the Golden Eagles (5-5 overall, 5-1 Region IX).

Throughout the season Northwest has struggled to find consistency when challenging in the middle of the field, but early in the game against LCCC the Trappers were winning most of the contested balls.

This led to opportunities for Northwest, but the players were unable to find any finishing touches throughout the first half.

Just under 10 minutes into the second half, a missed header on a goal kick flew over the Trapper defense.

A Golden Eagle attacker found her way onto the ball and passed the Trapper keeper to make it 1-0.

“The most dangerous threats they had were from set pieces,” coach Rob Hill said.

Another one of those set pieces came 20 minutes later, when a poor play defensively in the box led to a foul — giving LCCC a penalty and an opportunity to extend the lead.

The shot was slotted into the net and gave the Golden Eagles breathing room at 2-0, sending the Trappers to their fourth consecutive loss.

Goals were coming in bunches on Saturday in Scottsbluff when Northwest tried to rebound against Western Nebraska (6-4 overall, 3-3 Region IX).

The Cougars got on the board first just nine minutes into the game, looking for a repeat of the 5-1 defeat they handed Northwest in Powell.

This time Northwest had a response.

Zoey Bonner got the Trappers on the board just four minutes later, tying the score 1-1. Bonner was not done, scoring in the 24th minute and the 35th minute to complete a first half hat trick.

Quetzalli Penaloza got a tying goal in the 50th minute, and Peyton Roswadovski gave Northwest the lead back late on a 79th minute penalty.

“We had the lead three times and gave it up three times,” Hill said. “We watched film and we feel like they have corrected things they need to adjust.”

Northwest got one more back in the final minute from Alexzia Garcia, but it was not enough and Western Nebraska won 7-6 and extended the Trappers’ losing streak to five.

The Trappers now head on the road to Riverton on Saturday, taking on Central Wyoming (2-6-1 overall, 0-6 Region IX) in a non-conference matchup.

This matchup will still be key for Northwest despite not being in region play, as Central will make the trip to Powell in two weeks for the conference matchup at the end of the season.

“The mentality is getting there besides a couple slip ups,” Hill said. “We are looking for that complete game for 90 minutes.”

That match is scheduled for 1 p.m.