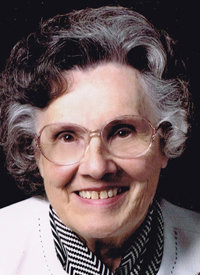 D. Rosalie Miller passed away April 8, 2022, in Powell. She was born Feb. 12, 1928, to Audra “Ray” Miller and Florence Snyder Miller on a farm near Terra Alta, Preston County, West Virginia.

Rosalie attended elementary schools in Corinth, West Virginia, and Graceton, Pennsylvania. She was a 1947 graduate from Chartiers High School in Washington, Pennsylvania. She continued her education in Youngstown, Ohio, where she studied voice. In 1948, she went to Chicago where she met her husband of 63 years, the Rev. Roy A. Miller. She graduated from Chicago Evangelistic Institute in 1951 with a degree in Christian Education and a minor in music.

She was preceded in death by her husband Roy; brothers, Wilbur and Arthur Miller; and sister Elenor Welling.

Rosalie enjoyed spending time with her family, botany, geology, archaeology, reading, studying history, cooking, camping, music, her church activities and researching family genealogy for herself and others. Rosalie belonged to the Daughters of the American Revolution, held various offices and founded the Big Horn Chapter. She was a member of Powell First United Methodist Church. She volunteered at the Homesteader Museum. In her later years she co-authored the book, A History of the Chance Area - WY or MT? She assisted in extensive research and the compiling of World War I Veterans of Powell Area.

The funeral service for Rosalie Miller will be at 2 p.m., Friday, April 15, at First United Methodist Church in Powell. Family will receive visitors after the service, to be followed by a private burial at Crown Hill Cemetery. Memorial contributions may be made to the Rocky Mountain Manor or to Powell First United Methodist Church. Thompson Funeral Home is in charge of arrangements.