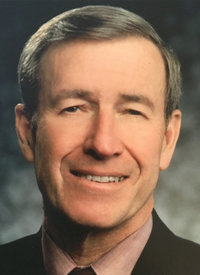 Ron, 85, was born in Billings to Raymond and Hazel (Grant) Fisher, and grew up in Byron, Wyoming.

He spent 36 years as an educator in Billings, retiring in 1998 from West High as a communications teacher and director of forensics. He also spent 30 years in the U.S. Army Reserve, retiring in 1993 as a Colonel and Battalion Commander of the 125th Ordnance Battalion in Billings.

Ron graduated from Byron High School in 1955 and went on to complete a bachelor’s degree in business at Eastern Montana College, and later, a master’s degree in speech from Washington State University.

While at Eastern, Ron saw a young woman talking with friends in a hallway who he described as “the most beautiful girl in the world.” He was smitten, and they married in October 1960 while Ron was on leave after completing basic training at Fort Ord, California.

The newlyweds headed east, where Ron reported for duty with the 1st Battle Group, 3rd Infantry (the “Old Guard”) at Fort Myers, Virginia. The Old Guard served as the president’s honor guard, and Ron’s unit was preparing for President John F. Kennedy’s upcoming inauguration. On Jan. 20, 1961, Ron took his place with the honor guard at the front of the inaugural parade as it marched down Pennsylvania Avenue to the steps of the Capitol. He was only feet away when Kennedy took the oath of office and later gave his “Ask not what your country can do for you — ask what you can do for your country” speech.

Ron began his teaching career in 1962 at Lewis & Clark Junior High before being hired at West High in 1968. While there, he coached his speech and debate teams to 12 AA State Championships, and at least 30 of his teams qualified for National Forensic League tournament competitions. He was named Montana Forensics Coach of the year in 1971 and 1976 and was inducted into the Montana Forensic Educator Association Hall of Fame in 2001.

One of his students, who later coached forensics with him at West High, included Ron among the colleagues who inspired her. “I learned from Ron that there are times when the fact that kids respect you is more important than the fact that they love you and that very often the two will go hand in hand.”

During his years as a teacher and long after he retired, former students frequently approached him out in the community to tell him they enjoyed his classes or to thank him for making a difference in their lives.

Ron was inspired to become a teacher by his third grade teacher in Byron, Vera Jones. She saw potential in the troubled little boy who had a rough start to school and was behind in reading and writing.

By the end of third grade, he was at the top of his class. “My transformation from angry young boy who hated school to a budding scholar had begun,” he wrote in a tribute to Mrs. Jones after her death.

Ron spent his weekends and summers as a U.S. Army Reserve officer. He achieved a Master of Military Science degree at the U.S. Army Command and General Staff College. Later, he taught for a summer at the 6th Army Intelligence School. He was named commander of the U.S. Army Reserve Center in Billings and rose to the rank of colonel before retiring.

In retirement, Ron honed his 30 years of skills as a fly-tier and fly-fisherman on rivers in Montana, Canada and Alaska. He was a master trout fisherman, and if he didn’t have a fly on hand that interested the fish, he would watch to see what they were eating. Then, using his portable fly-tying rig, he quickly created a fly that mimicked the real thing. He also started a fly-tying and rod-building business, selling his creations at area craft shows.

No funeral services or memorials are planned. A portion of his ashes will be interred at the Yellowstone National Cemetery. Condolences may be made at www.michelottisawyers.com.