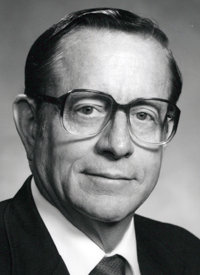 Robert Amos “Bob” Swander passed away peacefully at the New Horizons Care Center in Lovell, Wyoming, on March 2, 2022. As he was fond of saying, he lived a “pretty good life!”

Bob was born Jan. 13, 1933, in Worland, Wyoming. Adopted by Amos Henry Swander and Ida Bell (Burr) Swander, Bob was a blessing and gift for them.

He was raised in Worland, first in town and later on West River Road, where he fell in love with farming. He reminisced of harnessing horse teams for the harvest, stacking hay and working on equipment alongside his father as a child. Their venture in farming premium Louisiana muskrats came to a bitter end due to a spring ice-out, when ice floes along the Bighorn River wiped out the ponds, releasing larger and darker muskrats!

Bob drove a school bus during his last three years of high school and was active in FFA. He was honored to be the Pacific Region recipient of the FFA Farm Mechanics Proficiency Award, and traveled by train with his FFA Adviser Ray “Pappy” Lowe, to Kansas City, to be recognized for that achievement. He leased and farmed two farms the summer of his junior/senior year of high school, then turned down an ag scholarship his senior year (1951) at Worland High School because he enjoyed farming far more than school!

He shared many stories of driving livestock trucks early on with “the Geis boys” for Geis Trucking along with his best friend, Jerry Geis, and stories of the early days about Ma, Homer and the rest of what seemed to be his extended family.

Bob met Kay Lyman, his lifelong sweetheart, at a dance in the old Ten Sleep Well’s Garage and set his heart on marrying her. Eloping to Billings, they married July 14, 1955, and were later sealed in the Idaho Falls Temple. They took a quick spin through Yellowstone before returning to their Worland farm. Their early years were filled with square dancing, enjoying weekly dances up and down the Bighorn River valley.

They moved to Ten Sleep early on where the family worked side by side, ranching until 1979. Bob was recognized by the Wyoming Farm Bureau several times in the mid-1960s for his ag development and production skills. He was a founding member of the Otter Creek Grazing Association, a Washakie County Commissioner from 1965 to1984, a founding member and past-president of the Wyoming County Commissioners Association, a member of the Park County Planning and Zoning Commission, and a key player in the development of the Washakie County Museum, now the Washakie Museum and Cultural Center.

Following the ranching years, Bob became a real estate agent, first at Worland’s Hake Agency, then Casper’s Luker Realty, followed by a short stint selling insurance. Returning to real estate, they moved to West Jordan, Utah for a year, then settled in Cody. He wrapped up his 36 years as the broker-owner of Big West Realty and co-owner of Coldwell Banker Antlers Realty, with his focus on farm/ranch/recreation sales and management. He enjoyed brokering deals while growing and sharing his knowledge of Wyoming water rights and regional history and was a past-president of the Northwest Wyoming Board of Realtors.

Bob was active in the Church of Jesus Christ of Latter-day Saints, serving as branch president of the Ten Sleep Branch, then on the Worland Stake Council, a Sunday School teacher in West Jordan, Utah, and as bishop of the Cody 4th Ward.

He is survived by four children: Sandra (Bryant) Howe of Sandy, Utah, Steve (Caryl) Swander of Powell, Roy (Darla) Swander of Greybull, and Julie (David) Nelson of Denver, Colorado; and his sister Donna Tidemann (Bud) Stayman. His remaining grandchildren are Alicia, Taylor, Megan, Miquelle, Alex, Autumn, Kelsey, Justin, Brandon, and Kaylene. He leaves behind 11 great-grandchildren, plus one more on the way!

Funeral services will be held Tuesday, March 8, at 10 a.m., at the East Chapel, Church of Jesus Christ of Latter-day Saints in Lovell, 50 W Main Street. Visitation will be held from 9 - 9:40 a.m. prior to the service. Burial will follow at the Ten Sleep Cemetery at 2 p.m. Online condolences may be made at http://www.bryantfuneralhomeonline.com.

Memorial donations may be made out to the Ten Sleep FFA. Please send checks to PO Box 524 Worland, WY 82401.