The recent abundance of precipitation has alleviated worries by Bureau of Reclamation officials concerned about water levels at Buffalo Bill Reservoir. Although the drainages leading to the Shoshone … 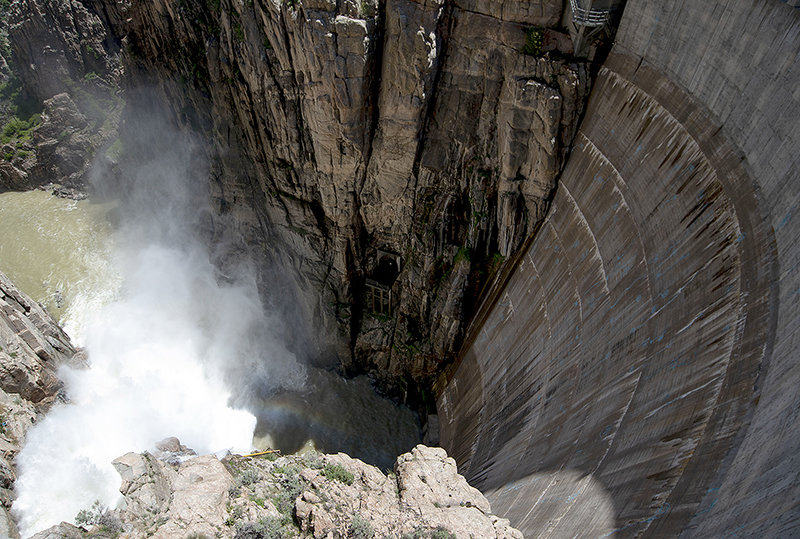 Water pumps out of the Buffalo Bill Reservoir Dam at about 5,000 cubic feet per second into the Shoshone River Monday. While area drainages missed out on much of the rain that flooded Yellowstone National Park in mid-June, there was enough precipitation and snow melt to fill the reservoir in a year it was predicted not to reach full pool.
Tribune photo by Mark Davis 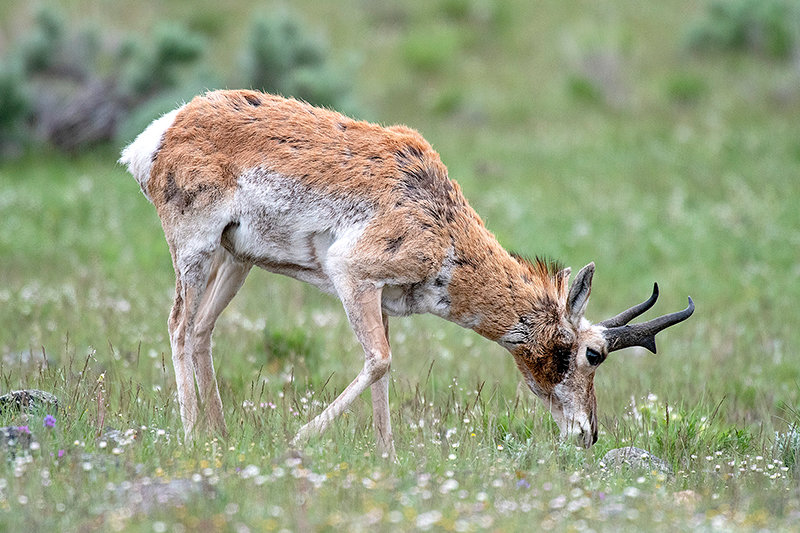 A pronghorn forages for a meal in a sagebrush steppe in northwest Wyoming. While recent news of a flood in Yellowstone National Park and the surrounding ecosystem might give the area a brief break from drought, most of the state of Wyoming still faces dry conditions, affecting wildlife and the plants on which they feed.
Tribune photo by Mark Davis
Previous Next
Posted Tuesday, June 28, 2022 8:25 am
By Mark Davis

The recent abundance of precipitation has alleviated worries by Bureau of Reclamation officials concerned about water levels at Buffalo Bill Reservoir. Although the drainages leading to the Shoshone River Valley didn’t see the heavy rain that caused flooding in areas near the northern part of Yellowstone National Park and southern Montana, it was enough to bring the reservoir to full pool by the July 4th holiday weekend.

River gauges manned by the U.S. Geological Survey, on the South and North forks of the Shoshone just upstream of the reservoir, saw high flows of about 10,000 cubic feet per second (CFS) during the same period northern sections of the park were flooding.

“It was high, but was certainly not record breaking or anything like that,” said Mahonri Williams, spokesman for the agency. “The rain largely missed those drainages that flow into Buffalo Bill reservoir.”

As a result, inflows have been much better in terms of the reservoir level than what was previously anticipated. The reservoir was down significantly, so there was plenty of space to store water, he said.

The agency earlier was convinced the reservoir wouldn’t fill this year as the area is still largely gripped by a multi-year drought. Now they are passing a lot of the flow downstream at the rate of 5,000 cfs, which is above what’s needed for demand for irrigators.

“There may be some low lying areas along the Shoshone River that may be seeing some high water,” he said, adding they will be able to store much of the water for the upcoming dry season.

As the summer temperatures heat up in upper elevations, there will be more water coming in when the last of the snow melts. The speed of the melt will be watched, but not overly concerning.

“We’re kind of monitoring the situation day to day to see how that snow melts,” Williams said.

The Bureau of Reclamation was established by Congress in 1902, during the Theodore Roosevelt administration. At the time, a significant portion of western states were viewed as the Great American Desert. The government knew they had to harness precipitation in the mountains to encourage settlement in the region.

“It was their intent to reclaim the arid west,” Williams said.

At first it was called the Reclamation Service, but later changed the name. The bureau built dams, reservoirs and irrigation projects to assist with crop development.

Concerns over drought persist. According to a Wyoming Game and Fish Department official, drought is undermining production of many species of wildlife in the state. “We’re primarily concerned about forage production,” said Deputy Chief of Wildlife Doug Brimeyer

While surface moisture has improved, subsoil moisture that feeds deeper root zones for woody species is still inadequate. Mountain shrubs that a lot of wintering and migrating ungulates rely on have faced  “pretty poor precipitation events over the last couple years,” he said.

Late winter severe weather conditions, along with prolonged drought led the department in April to propose 8,000 fewer pronghorn licences. “We’re really concerned about fewer pronghorn in [the northwest] part of the state,” he said.

“We set license quotas so that the people who draw licenses will still have an awesome hunt this year. And we regulate license types to provide good opportunities and stabilize our populations, allowing them to return to our objectives.”

When formulating hunting seasons, the department monitors trends within big game populations. Without sufficient recruitment, they make progressively conservative moves to help stabilize populations. They also have habitat biologists who monitor vegetation conditions and implement  improvement projects to help in the long term.

The department has habitat biologists scattered across eight different regions within Wyoming, but the work is expensive, he said. Fortunately, the projects have the backing of leadership.

“The Commission has a pretty solid commitment to help fund projects,” Brimeyer said.

They have money set aside for mule deer, invasive grass treatment, aspen management and other projects to help find ways to maintain healthy wildlife communities across the state.

Invasive plant species is one of the main concerns during times of drought. As the drought persists, invasive species like cheatgrass become more established.

“Invasive grasses are expanding. It’s pretty profound. We’re trying to do what we can to treat some localized places. But drought just exacerbates [the situation].”

Brimeyer said recreationists can do a lot to help the situation by not spreading the seeds of invasive species on their clothes and equipment, like all-terrain vehicles. Outdoor enthusiasts should also be aware of the drought this fall when building campfires, paying close attention to local restrictions on open fires as they change in the later part of the summer.

“Invasive grasses are so volatile. They dry out so much faster. And when they burn, it’s pretty extreme.”