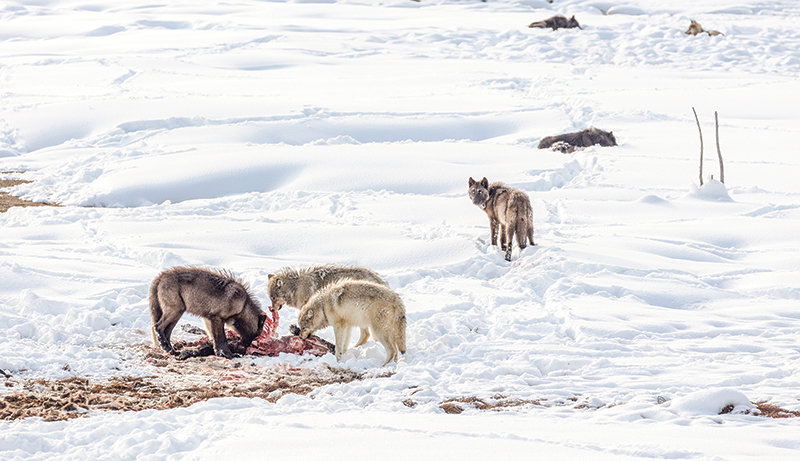 Members of the Wapiti Lake wolf pack feed on a bison in Yellowstone National Park. A rancher in the Crandall area east of the park says he’s been suffering significant losses due at the hands of the wolves and grizzly bears that roam the area.
File photo courtesy Jacob W. Frank, National Park Service
Posted Thursday, July 29, 2021 8:00 am
By Angus M. Thuermer Jr., WyoFile.com

With one dissenting vote in the two separate cases, the appointed citizen commission approved $71,339 to Josh Longwell of HD Ranch and $11,626 to Christian Peterson of Crandall Creek Ranch. Longwell claimed $322,685 in stock and other losses to grizzly bears and mountain lions; Peterson claimed $128,857 for losses to grizzlies and wolves.

Commissioners heard arguments by the ranchers — some aimed at commissioners’ emotions, others at their logic — about how wildlife caused them economic losses in 2020.

Although Wyoming considers wildlife to be the property of the state, the legal doctrine of sovereign immunity holds that the state can’t be sued for such damage. Wyoming statutes surrender that immunity in certain cases involving wildlife-caused damage, but only within strict sideboards. In the two cases, the ranchers’ claims exceeded those legislatively mandated limits, department officials told commissioners. Commissioners made their decision after the ranchers appealed department decisions limiting the compensation for “damage” to property.

Peterson said the agency should compensate him for lost yearling cattle at the same rate it compensates ranchers for verified losses of calves. Game and Fish will compensate for the value of calves confirmed killed by trophy game, plus a “multiplier” for suspected losses, depending on the landscape and predator.

But law limits compensation for yearling cattle to only the verified lost stock itself. Peterson and his attorney made other arguments for more money that the commission ultimately rejected. Those included that he should be paid for drone flights, SD computer cards, extra ranch hands, the maintenance of their housing and other expenses incurred because of wolves and grizzlies.

Longwell, who has lost previous appeals of agency compensation limits, sought repayment for calves lost to grizzlies based on a 20-times multiplier, far above the highest multiplier prescribed in Wyoming law.

“You guys are going to break me,” Longwell told the commission.

“The claimant applied an unlawful multiplier of 20 to his calf losses,” he said.

Both the HD and Crandall Creek ranches lie outside the eastern border of Yellowstone National Park and have leases to graze on U.S. Forest Service property. At Crandall Creek, Peterson said he switched his operation from a cow/calf ranch to one that runs larger yearlings only — in an attempt to reduce losses to predators.

Calling himself a progressive rancher, Peterson said he uses drones extensively to keep track of cattle, and tries to hedge his bets by monitoring commodity markets. Stock losses led him to buy two-way radios to keep the ranch team safe and coordinated. He also hired and housed two additional cowboys to ride 55,000 acres of Forest Service grazing leases, according to his claim.

Game and Fish biologists verified eight yearling steers killed by grizzlies and two by wolves in 2020. Regulations don’t allow a multiplier to be applied to yearling losses, so the department recommended $11,626 for damages.

Peterson’s claim of $128,857 challenged Game and Fish’s regulations on two fronts. First, he said, yearling losses should be compensated with the same multiplier as calves. Under that reasoning, Peterson claimed 49.9 yearling steers “damaged” by grizzlies and wolves for a value of $59,072.

“There’s no definition of calf,” Peterson’s attorney Jalie Meinecke told the commissioners. “I believe the law allows you to interpret that term as you wish.”

In a lot of cases, she said, there’s “essentially no difference” between the size of a baby calf at the end of the [grazing] season and the size of a yearling at the beginning of a grazing season.

“And so … the multiplier is absolutely applicable to a yearling operation to protect Christian and other operators like him,” Meinecke said.

Peterson’s second point was that wolves and grizzlies created additional expenses. He listed 12 items required because of wolves and grizzlies — everything from scouting flights to drones, the maintenance of cowboys’ housing and programming two-way radios — totaling $69,785.

But the agency isn’t allowed to compensate for such incidental expenses, biologist Ellsbury told the commission. “It’s not a bear actually damaging radios — any of that,” he said.

The rancher contends those expenses are actual damages, not what are referred to as consequential damages, Peterson’s attorney Meinecke argued. She referred to Longwell’s recent loss in court and said he was unsuccessful, in part, because he sought reimbursement for expenses that were not presented to Game and Fish as actual damages.

“We are presenting those to you at this initial stage so that as we go through this process we can have you, and then potentially an arbitration panel and the court, determine whether these [are] actual damages,” Meinecke told the commission.

The department agreed with his mountain lion losses, but verified only 30 calf losses and three yearling steer losses to grizzlies. The Game and Fish Department challenged Longwell’s assertion that he should be paid according to a 20-times multiplier for his calf losses. Longwell also sought to apply a three-times multiplier for his loss of yearling steers, a calculation Ellsbury said regulations do not allow.

Longwell has filed several claims and appeals in recent years. The Game and Fish Commission has sided with its staff, including when the rancher claimed $422,971 for losses in 2018. It said only $89,498 was allowed by law and regulation.

An arbitration panel, however, sided with Longwell in that dispute and settled on $339,927, a figure Wyoming appealed in court. Wyoming’s appeal focused on losses to grizzly bears, only, and Judge Bill Simpson of Cody sided largely with the state and cut the arbitration panel’s amount down to $61,202.

Longwell told the commission July 14 he was taking that case to the Wyoming Supreme Court. As he has before, Longwell argued constitutional issues for his claim of losses in 2020, saying the government was taking private property without compensation.

He told of a decade of conflicts with grizzly bears that have not waned, despite Game and Fish efforts to trap and move grizzlies depredating on stock. Much of the problem, Longwell contends, stems from federal protection of Yellowstone Ecosystem grizzlies under the Endangered Species Act.

Scientists debate how many grizzlies are in the ecosystem, whether they are increasing in numbers or expanding from core habitat because of a loss of natural food like whitebark pine nuts and cutthroat trout. The U.S. Fish and Wildlife Service has tried to remove the Yellowstone Ecosystem grizzly from federal protection, but courts have halted those efforts, saying the federal agency has failed to take several factors into account, including the effect such action might have on other grizzly populations.

“You know you got bears running out your ears,” Longwell told commissioners. “I don’t know if I can last 10 more years. And we hadn’t even got into, you know, the fact of the stress and all the bullcrap I have to deal with — all these kinds of meetings, arbitration, hiring a lawyer.

“But the real cost,” he said, “is the devaluation of a piece of property when you can’t run livestock on it.

“I need you guys to stand up to somebody and get some freakin’ answers,” Longwell said about federal protection of grizzly bears. While Wyoming has spent tens of millions of dollars on grizzly bear conservation, the federal government has kicked in 5% of that amount, Longwell claimed.

Wyoming’s grizzly bear conservation expenses, plus compensation for stock kills, come from Game and Fish’s budget, which is largely made up of revenue from hunting licenses.

“The people of Wyoming ought to be irate,” Longwell said. “Hunters and anglers that are paying for this ought to be … blowing the steam out their ears over this deal.”