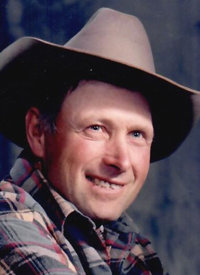 Ralph Lowell Yates, our dad, grandad, great-grandad, uncle, and friend is at last reunited with his sweet Dolly, and they are together forever. He passed through this earthly veil on Sunday, Oct. 11, 2020, in his home in Burley, Idaho. We will miss his “I am still kick’en,” his 10 gallon cowboy hat, gardening and love for the olden days.

Ralph was born the third and last child of John Lee Yates and Ellen Maude Bowen on Aug. 7, 1932 in Roscoe, Carbon County, Montana. He spent his early years growing up around family and cousins in Luther, Red Lodge, and Roberts. He loved growing up on the ranch with his older brothers Walt and Wally and attended Roberts schools. The one drawback was his suffering with hay fever his whole ranch life.

In 1940, he was age 7 and in the second grade, attending the Hogan country school not far from his grandparents ranch at Luther. Then in early 1945, at the age of 12, his family moved to Roseburg, Oregon, where he enjoyed memorable times attending the Looking Glass School. He was excited to visit Roseburg in 2004 and see how things had changed since his youth.

His family returned to Roberts, Montana, a few years later, where he graduated from Roberts High School and remained lifelong friends with many of his graduating class.

At age 20 he married his sweetheart, Dolly, and at age 21, he became a lifelong member of the Church of Jesus Christ of Latter-day Saints serving fellow church members in many different capacities throughout his lifetime.

He could tell you stories of working and loading cows into railroad cars with some of the natives of the Crow Indian Reservation at Pryor, Montana, and laughs about how he feared for his life. Other stories he shared were of his grandfather trading horses with the Crow Indians who preferred fast horses over work horses.

He knew how to work hard, making ends meet by breaking horses, working at Moat Mine in Stillwater County, working at a Forest Service tree nursery in Mineral County, milking cows and selling milk and cream in Carbon County, pregnancy testing cows in the Dakotas, guiding or outfitting hunters in Montana, and even experiencing deep loss and failure at times. Often, he was forced to pull himself back up by his bootstraps in order to keep bills paid and food on the table for his young and growing family.

Even though he faced many challenges in life, his life was well lived doing what he enjoyed most — being in the land and livestock business. It shaped who he was and who he became; it became the lens through how he saw life and others.

Ralph was preceded in death by his dear wife, Dolly; sons, Wesley and Yancey; as well as grandsons, Trinity Tilley and Jason Birch.

He is survived by his children, Linda Tilley (Marvin), Lena Seng (Kenny), Joe Yates (Janine), Scott Yates (Marianne); daughter-in-law Dana Yates; as well as many grandchildren and great-grandchildren, nieces, and nephews who he enjoyed taking on wilderness pack trips, playing fist off with, as well as spoons, chess and other games.

Funeral services will be held at Cowley Church of Jesus Christ of Latter-day Saints Chapel, 52 Main Street, on Saturday, Oct.17, at 10:30 a.m. Interment will be at Belfry Cemetery following the funeral services.

Hanging Up His Saddle — It’s been a long and dusty ride, life’s mountain trails he’s been, he has known its gentle rivers, and valleys ever green. He is hanging up his saddle. He has given it his best. The final roundup is over. And he’s ready for a rest. So he is hanging up his saddle. No longer will he roam. There’s a smile beneath that cowboy hat. For now he’s headed home. (Author Sue McCarthy)