Things have been looking good for Powell Valley Recycling lately. The center is enjoying high commodity prices; it scored two balers for cheap, and signed a trucking deal that will save on shipping … 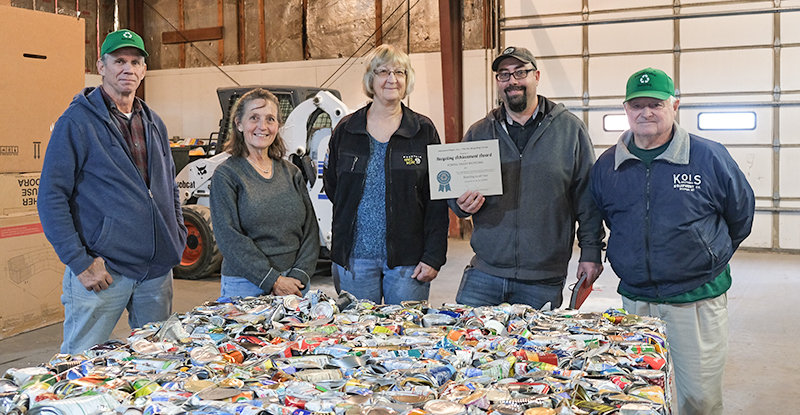 Beau Peck, with Interwest Paper, holds up the award the company granted to Powell Valley Recycling. With Peck, from left, are the facility’s shop manager, Robert Taylor, and PVR board members, Gretchen Beerline, Marynell Oechsner, and Myron Heny.
Tribune photo by Kevin Killough
Posted Thursday, November 18, 2021 8:15 am
By Kevin Killough

Things have been looking good for Powell Valley Recycling lately. The center is enjoying high commodity prices; it scored two balers for cheap, and signed a trucking deal that will save on shipping costs; the center also received some recognition for its contribution to recycling.

Interwest Paper Inc. recently granted PVR its annual Recycling Achievement Award, which it gives every year to its highest performer based on the quality and quantity of material it ships to the company’s Salt Lake City, Utah processing facility.

PVR shipped nearly 21 tons of material to the facility in 2020. That doesn’t include all the material the center shipped last year, as it uses a number of processors around the West.

Peck said Interwest, which processes about 1,000 tons of material per week, works mostly with rural recyclers due to the quality of material they ship. He said rural recyclers are receiving material from people gathering the items by hand and shipping them in their car. They tend to clean out food containers and keep things better sorted. Urban material recovery facilities (MRFs), as they’re called in the industry, tend to collect massive amounts of recyclables that are thrown in curbside bins and aggregated in large facilities.

“In a big city, you put it in a blue can and shut the lid and never think of it twice. We don’t buy a lot from the big commercial MRFs, because they don’t have the level of quality everyone else does,” Peck said.

The processors will reject material that is too low of quality, and they charge the MRFs to ship it back. In other cases, processors just lower the price they’ll pay.

Marynell Oechsner, president of Powell Valley Recycling board, said this is why the nonprofit organization no longer has the drop-off bins. People would just dump unsorted material, and to get good prices on their bales, PVR employees had to sort it all out. It was time consuming and expensive.

The center has since tried to hold more convenient hours, including Saturday hours every week. Oeschner said that seemed to address the complaints about not having the bins.

“We’re not getting as much static about it as we used to,” she said.

The center has been looking for new balers for some time, but the items, which weigh a few tons each, are expensive to buy and ship. PVR couldn’t afford a new one and its aging baler continued functioning, but there was always the possibility it’d give out.

“We’ve had money in savings, but we didn’t want to blow it all on one baler,” Oeschsner said.

When Worland put three balers up for sale, PVR placed a bid. There was some competition, but they were able to win two of the balers for $3,600.

PVR also signed a deal with North Park Transport that will cut shipping costs down considerably. With fuel costs up and a driver shortage, PVR had been paying high prices to get its materials to the processors.

The agreement with North Park will reduce costs for a load to around $1,000, including fuel, down from as much as $1,600.