The Powell Valley Healthcare Board of Directors appointed Chris Cox to fill an open position on the two boards that oversee PVHC and its facilities.

Cox, one of three applicants to the … 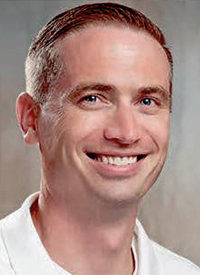 The Powell Valley Healthcare Board of Directors appointed Chris Cox to fill an open position on the two boards that oversee PVHC and its facilities.

Cox, one of three applicants to the position, graduated from Powell High School in 1996 and graduated from the University of Sioux Falls in 2000 with a bachelor’s degree in business administration.

He has more than 20 years of experience in finance, eight of which at First Bank of Wyoming. In addition to serving on the Powell Economic Partnership Board of Directors, he has served twice on the Powell Rotary Club.

Cox will serve on both the Powell Valley Healthcare Board of Directors and the Powell Hospital District, which oversees PVHC facilities, until Dec. 31. The remaining two years of the term will be open to candidates — including Cox — in November’s general election. The filing period for that term opens in August.

Cox will fill the positions vacated by trustee Richard Stearns, who resigned over a federal requirement that all people working or volunteering at health care facilities receiving Medicaid or Medicare funding be fully vaccinated by March 15. This policy applies not only to health care workers, but also those serving on hospital boards.

Trustee Boni Katz said all three candidates for the board position were strong.

“It was very hard to pare it down to one,” she said.

The other two candidates were Bob Graff and Rex Rich.

Before he retired, Rich was an electrician by trade. He later moved into management at ExxonMobil. Rich’s family moved to Powell when he was 14 and he graduated from Powell High School. His work in the oil industry took him away, but he returned to Powell to retire.

Before retiring, Graff also had a long career in the oil and gas industry. He and his wife, Linda, moved to Wyoming to retire. He currently serves on the City of Powell Planning and Zoning Commission.

After the board voted unanimously to appoint Cox, Katz said the board is encouraging Graff and Rich — or anyone else interested in serving — to run for the position in November.