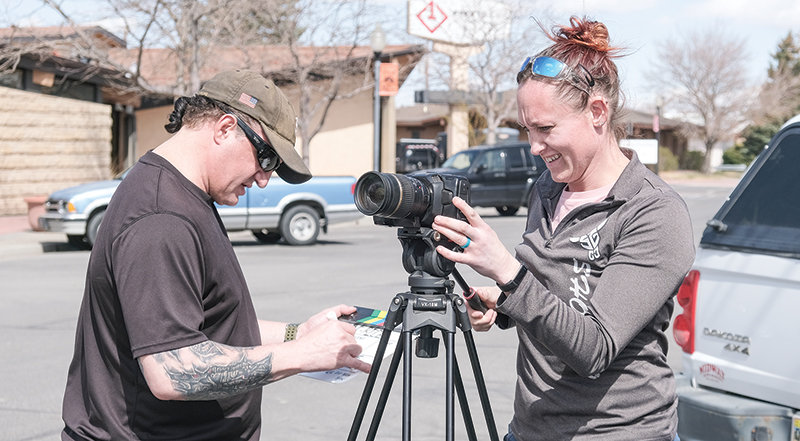 From the left, Junior Michael Ray and Jamie Lee of Crazy Mountain Productions start the process of filming B-roll for their film ‘Re-Ride.’
Tribune photo by Braden Schiller
Posted Thursday, May 19, 2022 8:10 am
By Braden Schiller

Filmmakers Lee and Ray are currently gathering B-roll in Powell for “Re-Ride,” a movie based on a book written by Ray.

“Re-Ride” is the sixth book in Ray’s “Seven Roads to Cheyenne” series, which was finished over a decade ago with the mentorship of Larry McMurtry, who wrote “Lonesome Dove.”

The series has not yet been released due to publishing complications but Ray has plans to release it in the near future. The book follows a former rodeo champion in the fictional town of Dean, Wyoming. Ray, who is a former rodeo cowboy and has roughly 20 years of experience in film, wants to portray rodeo and its athletes the way he saw it, which was not always ideal.

“One of the reasons I wrote ‘Re-Ride’ was I saw a former rodeo champion picking up trash on the side of the road,” Ray said.

Ray and Lee have both worked in the Hollywood environment. After seeing how non-starring cast and crew were treated they decided that they would rather make movies differently.

“I will make movies for free to make them real and right before I go somewhere else,” Lee said.

Lee and Ray hope to make movies where everyone on set puts in equal work and the projects serve the community in which they are filmed.

It was important for Crazy Mountain Productions to choose a community that was welcoming to film projects.

“We’ve never been more welcomed in a community than Powell,” Ray said.

Harlie Riddle, the daughter of Christi Greaham — a training and development associate at Northwest College and assistant director for the high school drama club — helped as producer.

“Harlie Riddle has single-handedly brought this production to the next level,” Ray said. “Harlie introduced us to our new spouse, which is Powell.”

Ray and Lee have made many sacrifices to produce films their way including living without running water for a period of time. They were understandably nervous about selecting Powell as their filming location. However, since committing to filming in Powell, Ray and Lee have fallen in love with the community.

Since arriving in Powell, Ray and Lee have been incredibly grateful to have worked with several groups in the community, such as K-Bar Saloon, Cody Nite Rodeo, Bar X Ranch and the Northwest College Rodeo team.

Ray and Lee were so impressed by the NWC Rodeo team they allowed them to shoot their own scene for the film.

“They just started nailing this thing and we had trouble keeping up,” Ray said.

There is not currently a release date for “Re-Ride,” which they will begin editing soon.

“That’s the hardest thing about this because the weather and editing portion can get stuck,” Lee said. “Now that we’re done with filming, the editing can’t be an afterthought.”